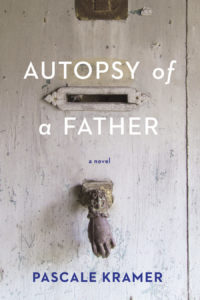 Pascale Kramer’s Autopsy of a Father is a spare, compressed novel that narrates the aftermath of an aging, once-respected progressive journalist’s suicide in a present-day Parisian suburb. Kramer doesn’t explicitly reveal the cause of Gabriel’s death, but implies that the backlash to his turn toward racism, anti-immigrant rhetoric, and populist nationalism may be at fault. In a public rant that took place before the novel’s start, Gabriel expresses support for two young, white, working-class French men who murder a third young man, an immigrant from the Comoros, without cause. In response, Gabriel says, among other things: “’I care less about this man’s death than the fate of the two young men who grew up here.’” Shortly thereafter, he is ostracized in the press, by his friends and neighbors, and he loses his job.

After Gabriel’s suicide his young, second wife, Clara, tries to justify his racist remarks to his daughter, Ania, under whose burdened and reserved gaze the story unfolds. Clara reveals her own xenophobia, class-hatred, and racism when she “blurted out”: “’I don’t approve of the murder of that man, that Comorian. Your father didn’t either, you know. I don’t believe everyone should be welcome here. My family is well-off, I’ve had a good education, for which I’m grateful and which I also wish for my children. Don’t ask me to agree to give it all up for people for whom none of that would matter.’” Gabriel’s and Clara’s comments are two of only a few moments of dialogue in the novel that articulate the anti-immigrant premise of the National Front’s far-right party platform, narrowly defeated in the most recent election, and more, represent an ideology on the rise across Europe and the United States. In this global, political and social climate, the central ideological topic of Kramer’s novel feels extremely urgent.

The fear of immigrants and fantasy that they threaten the French way of life is a change from Gabriel’s earlier elitist disdain of the native-born French working-class. As Ania recalls, during her childhood he would mock the kinds of young men he ruined his life defending: “Gabriel called them assholes when their bikes stunk up the path that ran along the property. Later, he felt a kind of pity for them, mostly because of the aimless boredom of adolescence in these half-dead hamlets, where even fresh bread was hard to find . . . There was considerable irony in thinking that Gabriel now found himself making common cause with these petty local people, whose vulgarity and narrow-mindedness he had so often ridiculed, in this same room, back when he was untouchable.” In moments like these American readers will likely feel resonances with our own ‘populist,’ nationalist, racist, xenophobic rhetoric, a rhetoric that builds up resentments in a white-working population disenfranchised by the same global system that oppresses those they are told to blame.

Given Kramer’s focus on the filial tragedy and the details of the mourning scene, these same American readers will likely long for more. Of course, no book can cover all aspects of a given conflict or controversy. Still, readers will remain curious about Gabriel’s pities and prejudices; the complexities of the way the press and the community receive his rant; why Ania herself has largely avoided politics as she grapples with a failed marriage, a deaf-son, and her job at a daycare; and the actual thoughts and experience of these “petty local people” for whom Gabriel sacrificed his career, to say nothing of their victim.

Throughout, Kramer’s prose is taut and delicately observant, especially when it comes to the nuance of characters’ bodies, attire, histories, and personalities. For example, as Ania watches her ex and their son as they wait to join her father’s funeral procession Kramer writes: “Novak put his arm through the lowered window, waiting until he understood when to leave and where to go. His jacket tightened around the armholes; he had removed his earrings, and the empty holes formed a painful pattern on his ear . . . Seeing the two of them like this, their sincerity and their eagerness to mirror that other world in which they played no part, left her feeling defenseless.” Ania’s cynical observation of her own family — along with the sartorial description of a man trying, and not quite succeeding, to dress the part — hints at the subtle tensions of race, class, and family that run through the novel.

Still, at times Kramer’s approach feels a bit squeamish, a bit hands-off, a bit unwilling to look deeply into the eyes of the rise of the far-right in France and in Europe, a bit unwilling to create sufficient space for the voices of those who suffer its violent effects, like the young murder victim, about whom we learn almost nothing. After all, it is his death, and the consequences of it, around which the plot turns. In fact, and much to Kramer’s credit, this very issue comes up within the novel, which Clara points out in her critique of those who condemned her husband: “’They even came here, in this room, to insult us. Of course, no one, not one of them, worried about the man who had been drowned. The body was never reclaimed. And no one bothered to ask about the boy, barely twenty-two years old, who was going to be locked up for half of his life.’” Here is a key example of a moment when Kramer opens up an opportunity for herself to say more, but chooses only to gesture to this partly-hidden story, keeping her attention fixed on the wealthy, well-educated, old French family with whom the novel begins.

One should not dismiss Kramer’s focus on the grief and bitterness, the interpersonal tensions and grudges, within the house where Gabriel’s body is laid out for days, “the face artificially smooth, the mouth wired shut, the cheeks transparent.” His corpse haunts the house — and the novel — a symbol of the decay and destruction caused by ideologies built on vilification of the other, like Marine Le Pen’s, like Trump’s, like Gabriel’s. And from there, what Kramer depicts is the resulting virus of hate that infects not only victims and the oppressed, but perpetrators, the oppressors, and their families. Kramer does not say so directly, but circles around this elephant in the room, implying that Gabriel’s turn to hate-based ideology is deeply linked to his estrangement from his daughter (when Gabriel learns that Ania’s boyfriend was from the Balkans he asks: “Is he Albanian or what?” He goes on to clarify: “I’m asking you if he’s Muslim”) the tragic end to his first marriage to an Iranian woman, and his strained second marriage to a woman holding onto a misguided fantasy of French purity.

In the end, Kramer’s Autopsy of a Father mingles the personal and the political, emphasizes the personal, and works to show the reader that the ill-effects of hate infect us all. And what of those places where this novel does not dare to tread? Well, readers can take these omissions as an invitation to extend the book beyond itself, to learn and speak and confront this global pandemic of hate. Because, as those Gabriel has left behind begrudgingly begin to see, each other is all we’ve got.