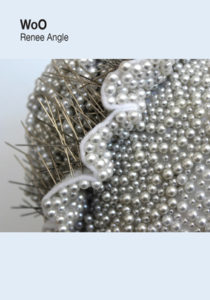 Renee Angle’s WoO takes questions of legitimacy as its point of departure. The preface opens with a declaration: “I am the bastard great-great-great grandchild of Joseph Smith, in search of a textline, not a bloodline,” and with this claim she sets the book up as an investigation of creative, rather than familial, inheritance. This declaration is also a provocation. According to doctrine of the religion that Joseph Smith founded, the Church of Jesus Christ of Latter-day Saints, the Church in which Angle was raised, “the family” is the ultimate vehicle of salvation. The Church promises a heaven centered around family and celestial procreation: there, the worthy may themselves become gods (and for Mormons, God is first and foremost a Father). Both the Church’s genealogical imperatives and proselytizing missions can be understood as part of its attempt to bring as many people as possible into this eventual heavenly family. So for Mormons, “the family” orients day-to-day activities and those practiced with an eye to eternity. By explicitly setting aside her lineage, her “bloodline” besmirched by extra-marital couplings, and foregrounding a “textline,” Angle profanes the Church’s most sacred frame of reference. Further, the “textline” she centers instead frames Joseph Smith in sacrilegious terms: as a creator like herself — an author, perhaps a poet — rather than as a divine conduit or an unimpeachable prophet. On top of all that, to characterize WoO as a translation of the first 116 pages of the The Book of Mormon, pages that “were lost” before the book was ever published, is to rebrand the translation process of The Book of Mormon itself — that is, Joseph Smith’s purported prophetic translation of the book written in “reformed Egyptian” (and inscribed on golden plates) into English. Throughout WoO, Angle samples found texts from Church history records, as well as language from Claudia Rankine’s Don’t Let Me Be Lonely and Charles Olson’s “Projective Verse.” If her translation and Joseph Smith’s are similar processes, then Smith is also collagist — or perhaps it’s that Angle is also a prophetess. Either way, as declarative statements often bring under scrutiny that which they seek to deny, we may understand Angle’s opening assertion to set up an inextricable relationship between textline and bloodline, a relationship that gives WoO its poetic material and historical force.

In a way, Angle’s opening parallels the way the Mormon church positions itself in relation to other denominations of Christianity: it styles itself as emphatically unlike Catholicism in that it rejects sainthood and iconography, and it distances itself from Protestantism by insisting that all Christian religions that antedate it lack “the fullness of the Gospel,” the church’s catch-all for its additional sacred texts and for its idiosyncratic doctrine and ritual. Yet, for all intents and purposes, Joseph Smith, is the church’s patron saint. The 186-year-old Church has even found its own latter-day Martin Luther, an apostate who has publicly accused church leaders of spiritual decay and corruption in the terms of LDS doctrine — that is, on their own terms. If this doesn’t finally realize the Church’s own eschatology, it at least underscores the way the Mormon religion often can be read as the bastard child of other older Christian ones — and further underscores the significance of the Church’s constitutional anxiety that sometimes veers into paranoia. Its performative sancrosanctity sets the backdrop for the more suspicious moments in WoO: “If you can give your body a temperature, can you not give it the word of God? And that being the case, we must speak in degrees of impostership.” But that suspicion is also accompanied by a generous playfulness that foreground’s Angle’s indebtedness to the vocabulary of The Book of Mormon, to the forms of LDS logic, and to the sacred centrality of spoken and written language in the Church’s culture.

Indeed, it’s important to note here that to read WoO either as a poetic airing of grievances or as a cynical expose would be a serious underestimation of Angle’s project here. Though the ex-ness of Angle’s Mormonism is certainly apparent — her critique of the church runs deep and is viscerally described — the poems here are about connections and lineages, about the forms of relation that we simply can’t choose. The majority of the book is comprised of long, sonically dense prose blocks through which one might be able to glean a narrative about secret polygamy, its cover up, its intergenerational effects, and the mystery that seems to imbue in the sacred:

We’re sure the parchment hanging over the mantle holds some significance. Where the gnats swarmed the men in their bags, and said friends were sated, I can still smell the pine trees and father’s snoring. If ifs are inconsolable, friends booby trap the ride down. There is assuredly in the swept away notion. Some function of socks. Bobby and athletic. Let splay the say. Between our weaning babies “he thought that the girls should find out what DB stood for.”

Passages like these, where we find ourselves in the middle of a domestic scene unsettled by cryptic artifacts and dialogue, highlight the way that secrecy presupposes or even manufactures the interest that sustains it; and a community confirms and perpetuates a secret’s existence by careful avoidance, elision, and erasure. On the other hand, Angle reminds us that passing secrets is a form of resistance, and that shared possession of a secret can create reality and security for people who become or are born as secrets:

If they wore x’s over the boobs and pube plate. If confession blurred an orange velvet curtain. In the small white strips a bedroom cut. Carbon’s husband dust moting in the air bin. Enter careful clap trap of residents. Three wives and a gun. Or three husbands glue gunned the ventricles and made a bomb-exploding trap of coquetry. I want him back, I back his wants but how want do I want him? . . . I say myself happily.

The women of WoO (Angle and her relations of varying legitimacy) are not the most visible figures in the book; rather, they seem to haunt it. Unnamed, for the most part, they intrude and disperse, sometimes singularly and at other moments in chorus:

Our vortex is fed up with your dispersals, reasonable

Not to be a cipher in your ambient color preferences

They find ways to make traces of their circumstances: the proof of descent that lies nascent in their blood, the relationship between the Church’s historical erasure of that descent and the patriarchal organization of the Church more broadly. And by tracing a textline from Joseph Smith to Mark Hofmann, the infamous forger responsible for the Salamander Letter (a document that surfaced in the 1980s offering a blasphemous account of the Church’s founding revelation), and on to herself, Angle offers a theory of this tracing as a powerful antidote to denial. Amidst fictions that compete for the status of truth, such brazenly absurd, self-consciously fictive language takes itself seriously as a site of potential while refusing to pose as a vehicle of institutional legitimacy. With Angle we “[e]mbrace the glittering phantom for a substantial truth,” who recalls us to the idea that the pursuit of transcendent truth easily becomes a pursuit for which truth and history become ancillary. In other words, it’s not the truth behind the founding of the Church of Jesus Christ of Latter-day Saints that’s important here. What’s important are the bodies, the violence, the people that are at stake in this truth:

Cut away the body wall and the pectoral and pelvic girdles, taper body and triple harmony of crystal bells. That’s not admiration that’s blasphemy! And monstrous bats, as with human countenance, in distorted laughter. It flexes the knee. Eventually, the Nephites, too, fell from grace and were punished by earthquakes. It’s one of those phony badges! called Commerce. The clannish surface of his blessing, his unfinished structure, his plural thou devil’s bird. The titles and prerogatives of his father. Remove the brain and place it in water. Ideas become secondary. But am I in a madhouse? Am I mad myself? Farce, farce, farce, farce, farce, my dear friends.

Angle draws our attention to these women that she can’t know, that she can’t speak for despite their shared erasure. Instead of speaking for them, she remixes the mythology of Church doctrine and fashions it into a more accurate because more fantastic and phantasmatic, more self-consciously nonsensical, story. Not story in the sense of narrative, of course — story in the sense of relating, recording, activating history; story as spell, as incantation.

WoO is thus ultimately not a project of historical recovery. The book situates itself squarely in the tradition of poems including history like Olson’s Maximus, many of Susan Howe’s books, and Claudia Rankine’s American Lyrics. However, Angle’s work here is not exactly to include this history into a larger narrative about Mormons and their secrets, patriarchy, or the invasion and colonization of the American West. It absolutely does that, and each of these histories are given their due criticism. But more, WoO puts pressure on our reliance on ideas like proof, the ease with which we assign heroism to acts of exposure, and the ways these ideas become fodder for the stories masculinist institutions tell about themselves.

If I am present in a subject position what responsibility do I have to the content, to the truth value, of the words themselves?