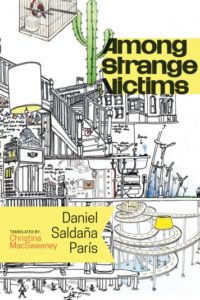 Peripherally Brazilian, and thus peripherally Latin American, the question “what does it mean to be Latin American” has hassled me for my entire life. It never occurred to me that this question, this rather constant anxiety, was the basis of tension for an entire facet of literary discussion — the core question of both novels and criticism. What does it mean to participate in a literature wherein novels and writers are described, as José Donoso laments in The Boom, as “too cosmopolitan, too intellectual . . . absolutely not what is expected from a Spanish American novelist” and submissions are rejected (as happened to Alberto Fuguet, father of the McOndo movement) because the stories “could easily [take] place right here, in America”? Contemporary Latin American writers have tried time and time again to maneuver past the dreaded Magical Realism and canonical names to present a new Latin America. And yet, readers and writers alike remain unable to quite place all that being Latin American, and taking part of its literary tradition, encompasses. Daniel Saldaña París’s Among Strange Victims (the first of Saldaña París’s novels to be published in the United States) is, despite the questions surrounding the Latin American canon, a natural successor in the Latin American oeuvre. Saldaña París eases forward from the Crack and McOndo movements, yet still evokes the hues of Julio Cortázar’s Hopscotch. But, perhaps most crucially, Among Strange Victims still wonders what this Latin American-ness could mean.

To describe the plot of Among Strange Victims is to do a disservice to Saldaña París, as few can bring the mundane life (and not-so-mundane musings) of protagonist Rodrigo Saldívar to such humorous and engaging levels. Twenty-seven year old Rodrigo lives alone in Mexico City, in an apartment overlooking a vacant lot in which a chicken lives. He is a man of high intelligence, plenty of routine, and little drive: a self-titled “Knowledge Administrator” at a small museum, his ambition peaking on Saturdays, when he strolls around his neighborhood and masturbates twice:

This latter action isn’t a norm, but that’s what generally happens, though I don’t plan it: it’s one of those indisputable recurrences of natural phenomena, I guess, like when the fireflies in an area flicker on and off together at regular intervals, synchronized by an invisible being.

One fateful day, Rodrigo breaks his routine by walking home from work, a choice Rodrigo had never “even considered,” imagining the zones of the city as “islands that can only be approached from underground,” and stopping in a cafe to have tea rather than taking the train. From this day forward, drinking tea and hanging the teabag on his bedroom wall become integral to Rodrigo’s immutable routine.

But this shake-up of Rodrigo’s routine is nothing compared to what Saldaña París unleashes next. One day the museum director’s secretary, Celia, “look[s] at [Rodrigo] distrustfully from her desk” and proceeds to leave a note on his desk that reads I accept. Instead of assuming the concrete, Rodrigo immediately gets caught up in musing:

Accept what? . . . the acceptance of things as they appear in our path as we file along the city’s median strips; the acceptance of the sound of the cars and of the morning announcements of the men selling gas and water and other produces, the utility of which is never made clear; a wholesale acceptance, without fissures, that embraces creation, its multiple faces, its most sordid corners.

But, just like Celia’s glare “sh[ook Rodrigo] out of the state of deep abstraction into which [he] had sunk,” his phone call with Celia to sort out the note, too, brings Rodrigo’s philosophizing to a stunning halt: Celia is “accepting” Rodrigo’s marriage proposal.

Saldaña París momentarily breaks the monotony of Rodrigo and Celia’s marriage (“Going home to find her overpowering mug on other pillow, at the table, everywhere, has become a form of torture. We don’t even have recourse to that thoroughly middle-class ritual of asking each other how our days were”) by introducing us to Marcelo Valente, a Spanish scholar relocated to the dusty and violent Mexican town of Los Girasoles (Rodrigo’s hometown) in order to study the poet-spouses Richard Foret and Bea Langley. After a lengthy (but meticulously woven) history of Foret and Langley, Saldaña París reveals that Marcelo has been sleeping with (in perhaps the most elegant sex scene I’ve ever read, illustrated through images of the bed and a glass of milk) none other than Rodrigo’s mother: the history doctorate, law degree holding Adela, who gives “free legal advice to women harassed by the ‘patriarchal system of the administration of justice.’” Bored of his life with Celia, Rodrigo develops a bond with Marcelo, staying in Los Girasoles and gallivanting about with Marcelo’s literati ex-pat friends and the beautiful (and young) Micaela.

There is an element of the unbelievable in Among Strange Victims perhaps familiar to readers of Latin American fiction (and no, it has nothing to do with magical realism). Like his contemporaries (Mario Bellatin’s Mishima’s Illustrated Biography and Valeria Luiselli’s The Story of My Teeth come to mind), Saldaña París eases readers into suspending disbelief through his wonderfully sharp, thoughtful prose. However, the particular strain of the unbelievable that Saldaña París indulges in is best described as mundane disbelief — no headless Japanese authors minding their daily business. Instead, we are asked to believe in Rodrigo’s simultaneous hyper awareness and completely chosen lack of control. We must momentarily believe that while yes, Rodrigo loves to question and wax poetic, it barely occurs to him that he could simply explain that no, he did not propose to Celia — that it was perhaps a colleague’s distasteful joke. That Rodrigo just floats through his life requires us to stop believing in characters the way we might want to. It isn’t that Rodrigo (or, for that matter, any of the characters) lacks agency. Rather, he is simply not an agent of change in the novel, distancing him from what we typically want from a protagonist and estranging him from his creator, the author, by acting precisely in the ways that we don’t expect the author to write.

The element of the somewhat strange and the upending of certain expectations alone are not enough to situate Saldaña París within the context of the Latin American literary tradition. Saldaña París participates in the convention of embedding an elaborate and plausible “false history” (Foret and Langley, based loosely on Arthur Cravan and Mina Loy) within the universe he creates. The most common comparison drawn both by the jacket copy and critics has been to Roberto Bolaño’s The Savage Detectives — in which Bolaño also creates the history of an elusive Mexican poet. But this practice extends beyond Saldaña París and beyond Bolaño, reaching back to Manuel Puig’s Kiss of the Spider Woman and, as mentioned earlier, Cortázar’s Hopscotch. Structurally, these books also share similarities, what with being divided into a number of sections allowing authors to jump time and space, if they so choose.

While Saldaña París’s aim certainly is not to answer what it “means” to be Latin American and what it “means” to write a Latin American novel, Among Strange Victims does not entirely neglect the question, keeping Saldaña París in that long conversation. Entire literary movements have been dedicated to blasting the myth that living in Latin America is living in Garcia Marquez’s magical Macondo — Fuguet writes that he aimed to not “crank out shamelessly folkloric novels that cater to the imaginations of politically correct readers — readers who, at present, aren’t even aware of Latino cultural realism.” Among Strange Victims also folds in Fuguet’s idea of Latino cultural realism in its approach to violence. Violence is by no means a focal point in the novel, but in its sparseness (the mention of checkpoints and the concern with young, non-Mexican women walking down a street alone at night) Saldaña París makes a powerful observation about how many Latin Americans experience violence: while not always immediately, constantly. And thus, to live one must learn to overlook the darkly quotidian nature of violence. However, while this is a lesson nearly universal to many Latin Americans, Saldaña París rightfully reinforces that Latin America is not an amorphous, cultural mass: Rodrigo often quips about other regions, e.g. “a bad South American film” and, although not Latin American, the tension caused by Marcelo’s “Spanish blood” (an unfortunately needed reminder that although all Spanish-speaking, Mexico is different from Peru is different from Argentina, and is certainly, definitely different from Spain). But, like the ending of Among Strange Victims itself, Saldaña París gives us no answers, just more entrances to the question. But, when faced with such a pleasurable book as Among Strange Victims, is that really so bad?

Julia Irion Martins is a graduate student at the University of Toronto, studying comparative literature. Her writing has appeared in Full Stop, MobyLives!, and The Village Voice. Follow her on Twitter @juliairion.