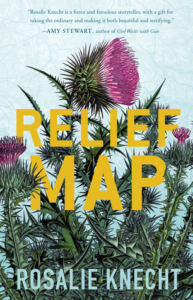 Dry, dull heat is evocative of mid-adolescence, when you are too young to get away from home but too old to be complacent within it. It feels stagnant but at the same time dangerous and unpredictable, as if we’re just waiting for something to happen, possibly sinister but perhaps benign. Rosalie Knecht’s Relief Map is the account of a summer in Lomath, Pennsylvania, the home of Livy Markos. The book is akin to a Rust Belt Lord of the Flies, an allegorical representation of the modern response to some seen but unforeseen terror – in this case, an escaped foreign criminal, Revaz Deni, who has taken refuge in the hills outside Lomath. The book is told in Livy’s and Revaz’s dual perspectives, the teenage girl and the middle aged (maybe) criminal who are both indicative of the changing nature of the world we live in, technologically connected but intrinsically flawed.

Reviewers might describe Relief Map as a coming-of-age novel but I’m disinclined to characterize it as such, because the term to me implies a more histrionic change in character or situation than in the novel. The language of Relief Map is simplistic yet emotive, forcibly casual at times but appropriately so, as if that’s just the way things are and the characters know it. Livy describes her burgeoning affection for her best friend, Nelson, as “bubbles of intimacy that appeared and then vanished and left everything just as it had been before,” and it feels realistic, the way falling in love when you’re 16 truly is. At that age, nothing feels real, as if it can all dissipate within an instant; affections feel transitive but still piercingly genuine, and they sometimes coincide with the most trying times in our lives.

The Rust Belt is a part of the United States that’s often ignored, perhaps because of its residents’ lower socioeconomic status: it is simpler to brush it under the rug than to explore its importance in the framework of the nation. In Relief Map, the town itself is a main character. Lomath becomes almost an island during the search for Revaz, but Gilligan’s Island it’s not. Its inhabitants turn on each other, making me wonder how much they liked each other in the first place and whether they would even interact if not tied together by proximity. They refuse to place their individual struggles on the backburner to concentrate on the peril they’re all in as a town, even when it would be prudent to do so. Because of this, they end up suffering more than they otherwise might have.

As a protagonist, Livy doesn’t come across as overtly controversial in her likability — I was brimming with neither praise nor censure — but I don’t think she’s intended to. The novel itself is almost free of romanticism as is Livy herself: hence why she doesn’t engender the emotional judgment characters like Anna Karenina or even Bella Swan inspire. Livy is genuine and relatable but not forcibly so; she has the requisite flaws of a teenager but isn’t brimming with the self-loathing or antipathy we’ve grown to expect from main characters in young adult novels. In a strange way, Livy represents a new sort of femininity, one that isn’t intended to allure but merely to exist. She isn’t remotely androgynous, but neither is she defined by her femininity or lack thereof. Similarly, Nelson isn’t either traditionally masculine or alternative; he is just a teenage boy who seems to meander through life because he’s never had to do anything but. One of the stronger aspects of the novel is Nelson’s relationship with Livy, which is very organic and seamlessly transitions from friends to something more.

When I first read the summary of this novel, I was frightened that Revaz would be a sexual predator and Livy his unwitting prey, which sadly wouldn’t have been a remotely surprising plot twist. From Lindsay Hunter’s Ugly Girls to Megan Abbot’s The End of Everything, when adult males have any sort of contact with young women in young adult books, the interaction almost immediately turns deeply sinister. But Revaz’s appraisal of Livy isn’t sexual or romantic whatsoever, but melancholy and nostalgic, like some distant but affectionate uncle. He sees in Livy a hope for freedom, indicative of his outlook on women as a whole:

Were women naturally empathetic? He was old-fashioned in believing they were. He straightened his stiff knee painfully, until he was sitting with his legs sticking out in front of him like a child. He’d always believed women would come and save him, and usually one did. Girlfriends, here and there. His sister, until she was gone.

Livy’s choice to assist Revaz reminds me of what Jess Zimmerman recently wrote about the emotional labor women undertake on a daily basis: “Housework is not work. Sex work is not work. Emotional work is not work. Why? Because they don’t take effort? No, because women are supposed to provide them uncompensated, out of the goodness of our hearts.” Livy feels obligated to help Revaz in a way I doubt Nelson would have, risking her own safety and that of her entire family, and I found myself asking, why does she care so much? It gave me a profound feeling of anxiety that Revaz was going to hurt her, or that she was going to sabotage herself into some unbreakable fix.

As I read the novel, I got to thinking how I would respond to the chaos faced by the citizens of Lomath, and I realized why Livy as a character fundamentally puzzled me. I’m disinclined to stand down when I know I’m being lied to, or when I’m treated the way the police regard the citizens of Lomath. I would throw a massive fit in this situation, because I’m obsessive about the truth and would go stir crazy being denied it. Livy, on the other hand, is not remotely recalcitrant to the town lockdown, but contemplative and almost matter-of-fact about it. It’s as if she regards it as a slight deviation from her normal life, a summer mishap of sorts. Livy shows more maturity than the adults in her town, including her own parents, not running and hiding but simply going about her life the best she can — perhaps because she’s so young, she doesn’t have that many secrets about who she is yet that she’s worried about being exposed.

Revaz, on the other hand, comes across as more emotionally wrought than Livy herself, with too many secrets to share within the scope of the novel: as if he were intentionally suppressing his past. His prospects are dim given his criminal status, and his constant state of hunger is indicative of his deeper issues, but at the same time, he remains philosophical and contemplative, similar to Livy herself. Despite his constant state of hunger and flight, he never loses hope of a brighter future.

But as a whole, the novel differs from many others in the coming of age genre because its conflict is almost entirely externalized. Not to say that Livy herself doesn’t grow from the town lockdown or its resultant effects, but she doesn’t internalize the issues she faces like many other teen protagonists. She takes actions that could be deemed as extreme but she resists blaming or condoning herself, overthinking their moral quandaries, driving the reader to evaluate the actions themselves free of bias. Livy reserves her philosophical musings for the race relations in her town and contemplations on the sullen summer heat, setting her apart from her contemporaries. Her attitude is refreshing, albeit slightly jarring, given her age and her background. Hamlet she’s not, but perhaps that’s a good thing. (For her, anyway: after all, Hamlet dies.)

Fundamentally, the novel tells a story that isn’t commonplace and needs to be told. The effects of deep-seated fear and misinformation drive the narrative as well as a valid mistrust in the authorities designated to protect the townspeople: all of which are highly prudent and relevant topics in the world we live in. What happens when the world outside is far bigger than you can imagine? When a situation is out of control with no sign of closure, how do we restore the status quo? How do you deal with not being able to rely on the people who are supposed to protect you? Relief Map answers those questions and many more, and it’s a tribute to Rosalie Knecht’s skill that the novel is so thought-provoking despite its brevity.