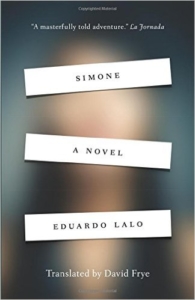 Eduardo Lalo’s Simone is a book for writers. His narrator is miserable, for reasons that he himself has never been able to fully define, though there is a sense that his misery is somehow connected to Puerto Rico’s invisibility to the rest of the world: a reflection of his own alienation. A university professor, as well as an author of some local renown, his vitality comes solely from observing other people and writing about them. He takes care to pay attention to people’s actions, but, to take one lively vignette out of many, his obsession is always their words:

I walk toward four women and from a distance I perceive an aura of stupidity. As they pass me, one of them says, “Addy is famous among the world of homosexuals.” The sentence doesn’t hold together, not only because of the misused preposition. She pronounces the world clumsily, partially swallowing the sound of the m, as though it were too big for her mouth.

He reads the newspapers, he says, because “the wealth of absurdities in them amuses me.” We only watch him do this once, but events themselves seem to be less of his concern than the language people use to describe or obscure them:

In a column listing the opinions of people whom the reporter interviewed on the street, six citizens were asked whether they thought the war in Iraq, which seems to be right around the corner, will go on very long . . . A man said, “Short. Our technology (our?) is much more advanced, and the American people will never agree to that.” (That? What is that?)

With the exception of another Puerto Rican author, the fictional Maximo Noreña, this narrator’s obsession with language and words is not one that other people in San Juan share. We get the sense that at one time, he might have had feelings about this — anger, perhaps, at what this lack of overall passion for reading and language says about Puerto Rico’s place on the global literary stage. These feelings are a hum in the background now, one that makes him accept a general sense of hopelessness in his day-to-day life. Then the messages come. They are unmistakably for him, they seem to be comprised of his own subconscious thoughts and musings — but he has no idea who is sending them. They are there for the public to read, scrawled across sidewalks and university chalkboards, but no one seems to see them, they are his alone, words as ignored by the public overall as those in his own published books. If he had any doubt as to their personal nature, this is obliterated when the messages show up in his own mailbox, then sporadically as emails, and finally, on his answering machine, on which,

my pursuer took the trouble to record a female computer-generated voice (one of those generic, spectral voices with extravagant vibrations at the end of the syllables): FROM WHICH REMARKABLY ENOUGH NOTHING DEVELOPS. I’ve written it in all caps because that’s how it sounded.

All of these messages are signed Simone, adding an era of feminine mystery to the enigmatic fragments. Directed by encoded clues, the narrator chases Simone through cafes and bookstores, until at last she introduces herself as Li Chao and suggests that they meet. Li emigrated to Puerto Rico from China at age six, diligently learning Spanish and paying for her college education with relentless work at the low-paying Chinese restaurants owned by her distant family members. Her own complicated story could be its own book, but at the forefront of Simone, Li is an art student with a voracious array of interests. Her relationship to language is no less complex in person than in her cryptic written notes:

Before we sat down, Li picked up a chess set and brought it to our table.

—I’ll be white, she said, and I realized that behind the grammatical perfection of her words lay an unusual intonation, a peculiar way to attack certain sounds . . . After a few moves, I’d lost three pieces, and when I hesitated for a long time over whether to move the bishop, I heard her say,

—Every four seconds a child dies of hunger somewhere on the planet.

She must have seen that I didn’t understand because she added impatiently,

—At least two hundred have died by now.

As her romance with the narrator intensifies, they embark on a series of anonymous collaborative public art projects, successfully bewildering the inhabitants of the surrounding neighborhoods. They also have a lot of sex, unfurled in pointedly poetic but graphic passages:

Li would take me in her mouth, with the total devotion that she reserved for her drawings, until a graceful and solemn overspilling came almost from beyond my body. My semen would fall, sprinkling on lips and neck and then running down to the belly or dripping from her chin like a teardrop, dense and enormous.

Such scenes would be more satisfying overall if not for the underlying trope here. Li is a lesbian. This writer is the first man she has had feelings for in decades, because he, more than anyone else, understands her relationship to words. In turn, the reader understands what this book, overall, is trying to say, that literature matters, and that, specifically, Puerto Rican literature should not be ignored. This latter point is made more explicit when a debate erupts at a literary cocktail party, leading to a dramatic throw-down — and, ultimately, manifesto — pitting the narrator and his fellow author Maximo Noreña, against a popular Spanish author who serves as the voice of the commercial publishing industry and its colonial underpinnings. This debate crackles with wit, and it takes a particular strength on Lalo’s part to pull it off as a convincingly character-driven sequence.

This book thrives on thought-provoking questions, uniquely described vignettes that can be at once humorous and deeply despairing, and a vivid cast of characters that include San Juan among them. Place as identity is an overriding theme here, particularly when one’s place, as in Li Chao’s case, is only recognized in a closed-off community that has almost nothing to do with a country’s general society. All of these strong points not withstanding, however, there is little to hold one to Simone if they do not come into it believing that the redemptive power of art is the most redemptive power, and even more specifically that a driving need to write is, in itself, consequential. This is ultimately a story about love as language, historical retribution as language, feeling itself as language. Perhaps this is why the book is, at its core, an argument, even a challenge: to bypass a country’s literature is to also ignore its history, its people, its love and its pain, and to care about them is to read them.

Sarah Neilson is a freelance editor in Boston. She writes a column for Full Stop on America’s emotional condition, and is on Twitter @sarahmneilson.