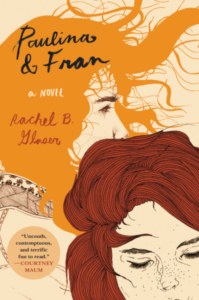 So much of friendship takes the form of a shared secret. An unexpected alliance can grow out of mutual confidence, a joke, or a lie — the truth quality matters less than its currency between two knowing glances.

Paulina and Fran’s friendship starts in such a way. They meet on a study abroad trip to Norway. Paulina scorns the other students on the trip, but takes an interest in the more reserved Fran. She’s drawn to her curls, so much like her own. They look at an old Viking tapestry together, make up a story about sleeping with a Norseman named Blood Axe, then elaborate on the story upon returning to school.

“We must be very beautiful to feel this beautiful,” Fran thinks in a private moment to herself, caught up in the powerful friendship she has made. Much of Paulina & Fran relies on these two art students’ shared assumption that a lifestyle — that life itself—can also be an art project. As such, an artist might find it necessary to be unforgiving, even cruel, in their pursuit of beauty. But the lesson of this friendship seems to be that art and life, one’s work and one’s personality, as much as they now seem inextricably linked, finally do differentiate themselves in the realm of human relationships.

In Paulina & Fran we see young women, and some men, eager to shed conventions — artistic, sexual, professional — but ceaselessly drawn into their current when it comes to the ways humans traditionally relate to each other: with jealousy, longing, pity, hatred, love.

Glaser, who trained as a painter as well as a writer, has written the latest campus novel, but imbued it with energy and humor to make her characters feel like more than art school caricatures. The powerful and complicated relationship between the two women is at its best when it transcends their situations. Jobs and projects are often secondary to one’s standing in the other’s eyes.

Paulina is drawn to the more demure and serious Fran. We get the sense that Fran is the more talented artist of the two. She is a painter. It’s never really clear what Paulina does. Fran fears Paulina’s approval, and waits upon her like a god, a god whose love is as terrible a bestowment as her judgment.

Meanwhile Paulina longs for Fran’s un-self-consciousness, that mark of the artist that she cannot master herself: “Befriending Fran has been like finding a jewel—a girl whose powerful naiveté was wholly her own.”

The two float through art school, dancing at an off-campus house called the Color Club and waging a silent turf war over a Video major named Julian. Glaser reserves the most interesting stuff for her characters as they try to transform art-making into viable careers, though. For the second half of the novel Paulina and Fran are not even really on speaking terms, but their presence in each other’s lives seems even more potent.

After graduation Paulina creates a kind of lifestyle in New York, relying on her magnetism for subsistence — and lovers for housing — until she sells her homebrewed shampoo recipe to a beauty conglomerate and becomes the figurehead and founder of SUPERCURL, a line of hair products for the overlooked curly.

Hair plays a large role in the book. It stands in at times for one’s creative faculties, others for the human spirit, personality, health, self-worth. Once Paulina sells her recipe, however, she feels spent as an artist. The best she can hope for is to be an icon.

Post-graduate life is not so kind to Fran. She drifts around, mostly unhappy, first as a house painter upstate, then to Ohio to write standardized test questions for art students (“She ruined her eyes looking at tiny JPEGs of masterpieces.”), all the while caught up herself on Paulina and Julian. “Forget style or talent; now it seemed the best thing a person could have was a house,” she thinks on the job one day.

A reunion with Julian provides her momentary optimism and certainty. The surging everything’s alright of intoxication, of approval in another’s’ eyes, of being again someone’s good graces.

Fran looked at a spider’s web that stretched between Julian’s dresser and the wall. The spider was alive like her. Some life energy connected her to it and everything. The future was going to be easy! Fran thought, rummaging through her bag for underwear. She didn’t need a new person! She didn’t need to change!

Soon another dawning certainty: change isn’t up to us. Friendship and fortune work like weather, fickle and fast-changing.

And despite Paulina’s cultivated self-image, her wiliness, her self-made career, she too is quite prone to being caught up on people. Her need for control and influence is hardly satisfied by her work at SUPERCURL, and Paulina longs after Fran as she lounges in her Manhattan apartment, surrounded by boring new friends and acolytes.

Being “caught up on” someone feels like perhaps a modern predicament. That kind of repetitious-compulsive relationship to the idea of someone, apart from their actual presence, is greatly amplified by modern life. Imagine Zuckerberg, sitting alone, hitting refresh on Erica Albright’s Facebook page, and you have the right idea. Much of Paulina & Fran seems to take place just immediately pre-smartphone (early 00s, say?) but these characters both demonstrate the impulses of their generation so well, obsessing over their feelings for the other, but faltering when the opportunity for reconciliation arises.

If elements of the plot feel familiar, Glaser’s prose deserves attention. She is a master of the left-field statement-sentence. This kind of strange non-sequitur speech that seems like it shouldn’t work, but somehow does. As Fran begins to work as a house painter, we’re told that “it felt human to trust ladders.” Others ring with a fantastic specificity. In an unguarded moment Paulina “looked and felt like a shipwrecked alien whose mission had gotten horribly derailed.” Or this simple evocation of the leafy college town streets: “The leaves on the trees rustled in that scared-horse, about-to-rain way.”

The singularity and strangeness of Glaser’s observations and style bristle a little bit against the more traditional campus and post-grad setting. But they also give this genre, which risks being mired in its convention, a new field of possibilities. This is her first novel, and it certainly feels different from the strange, more free-floating stories in an earlier fiction collection, Pee on Water. While the move to a more conventional plot for a debut seems smart, publishing-wise, some of Glaser’s more off-the-wall conceits are missed. In her story “The Jon Lennin Xperience,” for example, we see Glaser using video games, celebrity and a classical sense of fate to address the disparities and odd unity between solitary virtual lives and time spent with other people.

Another standout from Pee on Water, the title story, has just been anthologized in Ben Marcus’ New American Stories. It’s a completely different creature than Paulia & Fran: a metaphorical mediation on human civilization, progress, our mobility as a species. You sense Glaser’s interests are bigger, even universal or galactic in scale. In Paulina & Fran that bigness is suffused through the mystery of human personality. We can still hear distantly the swirl of galaxies that makes the hair frizz and stand on end.

Charles Thaxton is a freelance writer living in Brooklyn, New York. His Twitter is here and his Tumblr is here.