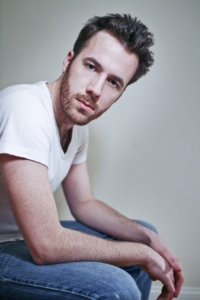 Miles Klee, pantsless, lay sprawled on his bed, his dogs making little effort to distinguish his body from mattress, while his wife slaved over a hot meal of leftovers to the tune of what he described as “trashy hip-hop.” Some fifteen hundred miles away I sat, variously on the toilet, bed, office chair, and the backseat of a car that my next door neighbor left out on his curb some five years ago. Except for the toilet, I could say I was wearing pants the whole time.

It was probably around the time I reclaimed my neighbor’s trash as room décor that I started following Miles Klee’s blog “Hate The Future.” I was jealous. Still am. No one, including myself, would have blamed Klee if he had done what so many people get to do, and turned his blog into a book. Instead, in 2012, he published the novel Ivyland. A 2013 Tournament of Books selection, it depicted a slight future, or perhaps an alternate present of the eponymous and fantastical New Jersey suburb. His newest book True False visits similar dystopian territory, but is much more than that. The collection is not about a place or time, but the uncomfortable dichotomy of fact and fiction, intimacy and enmity, real and fake, true and false.

Nathaniel Heely: Your first novel Ivyland came out in 2012. Were you writing the stories of True False before, concurrently, after?

Miles Klee: The oldest stuff in this book was written around the same time. “Assembled in the Light” was written even before, like college, and had existed as a chapter in Ivyland. But it completely derailed a thing that had more than enough derailings. I published a version that I don’t really like anymore in 2009, under a different title. I’m hoping I can finally lay it to goddamn rest.

Did you write those early stories with the mind that you’d put them in a collection?

Ivyland was a craven attempt to splice a lot of short stuff into what you could get away with calling a “novel,” since I didn’t have the focus or stamina for something recognizable as such—and maybe still don’t, as I’m finding out. So I tried to jam in everything, and a lot just didn’t fit or wasn’t ready, and some of those ideas survived to fight another day. At one point I kind of had a whole story about the rural swamp people the soldier in “Drone” is dispatched to wipe out, but in the end it was just this phase to another story.

In general, I did think that getting a novel out would let me publish a collection in which separate stories didn’t have to cohere in any expected way.

Well and I think I read that the original Ivyland manuscript was something like 500 pages. Are you an overwriter by nature? Because the stuff you get published has a kind of refined concentration. “Drone” is a great example because the activity moves so quickly, yet it takes up only four or five pages.

Maybe even longer (just to self-mythologize). It was a kitchen-sink, first-book mess for most of its life. I’d actually rather things move along at a breakneck pace, taking every shortcut and gestural advantage. There are writers who can really unravel a sweater with slow deliberate style, but, if anything, I must underwrite. I’m always trying to get out of explaining or defining anything.

Was it harder to sell an agent/publisher on a story collection that’s as diverse in lengths and styles as this? At the very least you seem to have latched on to OR Books pretty well with these two books and the Watchlist anthology.

Well, being in something as savvy and star-studded as Watchlist is a clear benefit to being with OR in the first place. Share a credit with Robert Coover? Sure, why not.

I was pleasantly surprised by how agents and editors reacted to True False, whether or not they were interested in pursuing it themselves.

From your popular blog Hate The Future (may it rest in peace) to the novel Ivyland to several stories in True False you have a distinct taste for dystopia—perhaps dystopia’s a bad word, but it sounds better than “sad stories about a future that’s kind of terrible.” Does this come from a place of fear? Entertainment? Shock and awe?

Maybe dread? The future’s where we’re all gonna end up someday, man.

I also enjoy thinking about the things that will happen when I’m already dead.

It’s funny. When you put it like that it makes me think that these stories are something like a contemporary vision of the afterlife. Since Nietzsche killed God with his words, the stories we make up for when we’re dead have to be grounded in the world that’s around us…but still not totally in the present.

And it’s not all like this of course. There are stories of Pythagoras (personal favorite of mine), depression era bank robbers, a mid-century milk man. But the way in which pretty much everything is told there’s that tangible speed to your storytelling that mimics this onslaught of information in modern life. Am I far off here? And is that something that’s more universal to our history than we give credit?

To me every human has always seemed overwhelmed. Even those who are “doing well” must be vexed by their circumstances, their own decisions. Or at least that’s one reliable way into their heads when you want to write them. It’s worth asking whether people have always been this way or that—a question I dropped into “A Syndicate of Angels”—but you’d need a team of expert anthropologists, sociologists, neurologists and historians with a working time machine to tell you the answer. For me it’s just a maddening riddle.

Speaking of riddles, a number of the microfictions, to me at least, read like jokes. Not just in that there’s humor to them, but there’s an emphasis, a punch in that last line. There’s no time or space in that form for a denouement. Is there a lot of influence out there for short stuff like this and how does a story of a hundred words or so formulate for you?

With the short stuff I am mostly embarrassing Lydia Davis and Thomas Bernhard, both respected for their spring-coiled, one-paragraph mousetraps. There’s a bracing finality to their shortest pieces, and an almost cavalier telling that gives the sense of venomous gossip—which, of course, makes for fantastic reading. I’d like mine to have the effect of little epitaphs on askew tombstones in a shabby cemetery.

Is a short story more satisfying than a novel?

I don’t think I could say so in a voice that wasn’t deliberately pretentious. They’re both good! A story does sometimes sting all the more for being small. Shirley Jackson could write these slices of domestic life that cut all the deeper because you imagined them as slight.

During the day you’re a Daily Dot reporter, where they apparently think you’re a character in your own fiction. You’ve constructed and used a homemade fleshlight, used Whisper to contact drug dealers, kept a diary of you and your wife’s sex life via smartphone app, as well as attempted to boost your sexual virility with herbal teas. Do you seek work or experiences that are strange in the same way you seek different and multiple forms/ideas of fiction?

Thankfully I made editor at work and can farm out most of the stunt reporting, which at the time was I suppose a function of my shamelessness and the thrill of terrifying transparency. The Daily Dot is all about the Internet, and the Internet is all about being too out there, all the time. To the extent that my characters reflect the forms of my own incipient madness, yes, life is imitating art, or vice versa.

One of the cool things about the novella “Love” is that dialogue is often stripped down, almost sloganized like an advertisement. Does dialogue come naturally to your ear or do you have to hammer away at it like a team of Madison Avenue execs trying to formulate the perfect three words?

To return to the notion of linguistic shortcuts: Everyone uses them all the time—otherwise they blather on, and we hate them for it. That said, dialogue in fiction is a lot as practiced day in and day out: Either you fuck it up, in which case revision gives you a chance to fix it like you never can in life, or you absurdly get it just right, right off, in this zen, not-even-trying way.

Did you have much of an instinct to tinker with stories in this second incarnation? Was there some stuff that just couldn’t make the cut?

I knew of tinkering that had to be done, and the wonderful agent I worked with on a big overall revision—Leigh Huffine—identified the rest. Some published odds and ends didn’t square with the manuscript as we reshuffled it, though because I can’t bear to throw anything away I will probably have to salvage those in the coming years.

Any follower of your Tumblr can tell that you’re a big music fan. Short story collections remind me of albums—very often concept albums. Do you consider yourself True False to be a concept collection? (Bonus Question: Feel free to ignore: And do you have a soundtrack for this book?)

I’m trying to put together a soundtrack for it for Largehearted Boy, but all I have on there right now is Yo La Tengo’s “From a Motel 6,” and that may just be because I’m obsessed with it.

Not sure I’ve thought of the whole book in music-analogous fashion but there are entries that rely on that—“Sonata” being a more glaring example. Let’s call it a compilation of killer B-sides.

Nathaniel Heely is a graduate of the University of Arkansas. His fiction has appeared in multiple places online and off including Workers Write! The Gambler, decomP, Vine Leaves Literary Journal and several others. For more of his work visit Nathanielheely.com