The Sleep of the Righteous – Wolfgang Hilbig 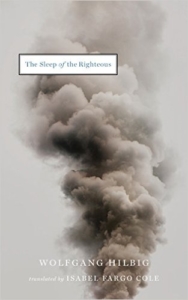 In his beautiful, autobiographical novel, The Sleep of the Righteous, the late East German poet and prose writer Wolfgang Hilbig masterfully reveals the acute self-consciousness of his unnamed but same-self narrator, an emigrant to that porous and shape-shifting borderland that divides reality from perception.

Meuselwitz, the East German coal mining town where Hilbig grew-up, is the nucleus that binds the novel’s seven individual stories. It is a poor town, air thick with the dirt of the mines, neglected and stagnant since the end of World War II. In this depressed, uninspiring place women outnumber men and the kids, many of them fatherless from the war, are bored and listless.

At that time there were a dearth of men in town; most of the children were fatherless, and many remained so forever. Time refused to pass, bearing down on them like a weight that stunted their growth. And the sole liberation from boredom lay in growth, in the adulthood that all the others had achieved some incalculable time ago and no longer wasted a word on. And the books we read, the stories we made up and told, as a rule featured only adults, and for the most part only men. — The mere thought that you were still small made you sick, you sickened with boredom . . . There were no fathers to take pride in your growing up after them.

Although the stories in the novel’s second half take place when Hilbig is an adult and no longer lives in Meuselwitz, the town’s atmosphere and the memories it evokes continue to envelope Hilbig like a damp, wool cloak.

The exigencies of life in Germany after unification exacerbate Hilbig’s preference of the past and create a sense of alienation. His wife accuses him of an inability to live independently or take initiative. To her, his passivity is repugnant and incongruous with the new freedoms and market economy. But Hilbig cannot adapt. He recalls his work as stoker in a boiler house during his youth, an occupation in which he was needed, and in which he belonged, because his labor was integral to the factory’s operation. In contrast he now feels outside the system, his life and attitudes superfluous to the engine that is propelling society on its new course.

Hilbig’s incomparably fine powers of description, so eloquently translated by Ms. Cole, are everywhere apparent in the novel as here when under the grip of Hilbig’s childhood imagination even ordinary household objects such as wine bottles assume monstrous qualities:

Oh, the bottles spilled from the ruptured drawers; if, when seeking an object of deliverance such as a hammer or some other tool, one opened one of the still-shut drawers, one again found bottles, arranged in oddly obscene rows and layers: they lay neck to belly, belly to neck, seeming to copulate in a peculiarly inflexible fashion which was lustful all the same and appeared not to fatigue them in the slightest. And indeed, it seemed as though the permanent unions at once gave rise to the progeny which had slipped behind the tables into the Beyond of now-impassible corners where the bottles had long since entered a state of anarchy and rose in randomly scattered heaps: as if baskets full of bottles had been dumped out, from overhead and at a proper distance, in an attempt to bury the other bottles and finally make them invisible.

Perhaps more than anything it is the natural world that molds the impressionable young Hilbig’s demeanor and thoughts. In Meuselwitz nature provides but never satisfies. The thick summer air is choked with the dirt and dust from the mines, but the rain showers that temporarily clear the air of grime make muddy streams in the deeply rutted dirt roads; the hot sun ripens the summer fruit, but much of it rots, becoming putrid before it can be used. While he can appreciate the soft, verdant, natural beauty of other places, Hilbig feels compelled to express himself only when he is writing about Meuselwitz with its persistent ugliness, the place that exposes his fears and disillusionments and enables him to write with a heightened sensitivity that reaches the sublime.

Throughout the course of the novel, Hilbig engages in ritual, nighttime walks to his mailbox, and these strolls are the point of departure for journeys of the mind where memories are distorted by time and dreams have the solidity of reality. In these transports darkness is the pervading hue — the coal soot that enshrouds the town, the night’s impenetrable vastness, the calculating, self-loathing and deceitful souls of men — and serves as a metaphor for the weight of Hilbig’s regret and guilt. It is a burden that he will continue to bear because, as the novel’s title story indicates, only the righteous are able to find rest from life’s dark evil and cruelly this “sleep” can be reached only in death.

The Sleep of the Righteous is the second novel of Hilbig’s to be released in English translation in as many months (the first, ‘I’, also translated by Ms. Cole, was published by Seagull in August), and it is a real gift to English language readers that finally, albeit posthumously, we have the opportunity to discover and admire a portion of this wonderful writer’s oeuvre.

Lori Feathers is a freelance book critic. Her recent reviews can be found at Words Without Borders, World Literature Today, Three Percent, Rain Taxi and on Twitter @LoriFeathers