Turtleface and Beyond – Arthur Bradford 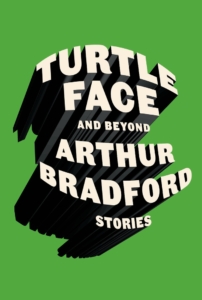 The narrator of the twelve stories in Arthur Bradford’s new collection, Turtleface and Beyond, is Georgie, a conscientious bumbler without guile or self-awareness. Despite his best intentions, Georgie spins in a revolving door of misadventure. The reader spins with him, and enjoying Turtleface requires the reader to like Georgie as he works his way through an entire catalog of slapstick mishaps. Fortunately, Georgie is supremely likable, an amiable victim of the comic violence into which he falls and flops. Take the story “Wendy Mort and I,” for instance: Wendy, Georgie’s ex, has a new boyfriend, a director, and Georgie thinks he’s an asshole: “He wore an ascot sometimes though, and this really drove me nuts. Who does that?” Intent on telling Wendy his opinion of the director-boyfriend, Georgie crashes into her apartment, swings at director-boyfriend, fails to land the punch, falls to the floor, lurches out the door and tumbles down the stairs to bang his head on the railing. He’s like Buster Keaton, but without the rubbery grace and stoic sobriety. Like Keaton, Georgie’s fumbles read as a lack of affectation. He’s comic and disarming, but genuine as well. His plight feels real: without the usual barriers of discretion and embarrassment, he is susceptible to adventure — when he’s not stumbling into it, it’s stumbling headfirst into him. As a blunderer, Georgie is reliable, but too much so: after a while his tendency towards mishap feels predictable. The mishaps are farfetched, delightful, but Georgie, plodding along, is the same old guy. And here’s where the collection falters: if Georgie can’t surprise us, the stories can’t either.

A challenge for story collections is to work in harmony. More often than not, their stories expose and out each other, reveal their shared tricks and hinges, show too clearly the author’s hand. Despite their comic dexterity and tight construction, the stories in Turtleface suffer from their union. Bradford uses physical humor effectively but relentlessly: Georgie pokes an old man’s ass through a hole in an outhouse toilet; Georgie and his traveling companion wrestle in a kitchen then burn the house down; Georgie gets hit over the head with a bottle; Georgie rescues a baby that barfs all over the inside of a truck; Georgie gets socked in the face and squashed by a mattress. Bradford subjects his protagonist to these physical trials to move things along. But the series of mishaps comes to feel like a pattern we know too well, like a performer who gets an apple pie in the face, then a cherry pie, then a rhubarb pie, then a chocolate cream pie. After a while, we get it. Even Georgie’s charm cannot save this book from redundancy, and he doesn’t help to vary the course of the stories — he doesn’t do much that’s unexpected, and despite the onslaught of episodic oddity, he’s somehow intractable, stubbornly unchanged at book’s end.

It’s unfair to compare any short story collection with Denis Johnson’s titanic Jesus’ Son, but Turtleface seems to invite the comparison. Hospitals show up frequently in both, as do idiot escapades, knocks on the head, and babies in cars. It’s hard not to read the name Georgie as an act of homage to “Emergency,” the masterpiece in Johnson’s collection; in Johnson’s story, Georgie is an orderly glutting himself on pharmaceuticals. Like Bradford, Johnson relies on physical comedy and an aimless narrator to bring his stories around, but Johnson plays the game of fiction with more chips — his stakes are death, addiction, self-destruction, and the slender chance at salvation. Below the surface of Johnson’s stories are endless, unknown depths. How far will his protagonist fall? For Bradford’s Georgie, we never truly worry for his fate. This is an important and somewhat unfair distinction from Jesus’ Son: Turtleface is lighter fare. It digs just below the surface of events, but never deep enough to set off shockwaves. Because Georgie has so little self-consciousness and no thought for self-scrutiny, the ramifications of events go unexplored. The effect is comic, but exclusively so. This is not such a bad thing — entertainment and humor are achievements in themselves. But as I read on, I yearned for something new — a change in the tone or register, a new element of surprise or discovery. Again, the comparison with Jesus’ Son is unfair: Johnson’s book is far more ambitious, a work that angles for wonder and mystery even while enumerating the desperate and aimless lives of addicts. His stories are irreducible; they dare to be complex, they risk misstep to reach profundity. Bradford’s project is smaller, less sweeping and severe. But there is something too tidy about Bradford’s stories, which shy away from the true substance of life, its confounding messiness. Were Bradford to apply his formidable gifts to exploring that darker territory, I imagine his fiction would be formidable as well.

Even so, it’s pleasant enough to read a series of well-executed stories. The outlier in this collection is “Orderly,” in which Georgie works at a mental institution and begins sleeping with one of the patients, Elsa, until she finds out she’s pregnant. The story is Bradford’s most concerted attempt at tethering one of his tales to real emotional weight. It’s not the best story in the collection, but it shows he’s willing to attempt something that might have an outcome of which he’s unsure. When Elsa has a miscarriage, the Georgie that emerges is different: tender, self-searching, penitent. “I’m a bit older now,” Georgie tells us in the story’s concluding lines, “and I find myself wondering about the child that Elsa and I could have made. Children, I believe, can exceed the sum total of their parents. Perhaps in their little genes lie lessons learned from all their past mistakes. We never could have raised that kid right, but maybe she would have grown up to be beautiful and strong.” Who is this Georgie? He is surprised and surprising, a Georgie who bumps against the limits of language. All he can do is speculate, dream, feel the slight alterations turn in his being. If only there had been more of this Georgie, this one, perplexed by feeling and by the arbitrary range of experience.