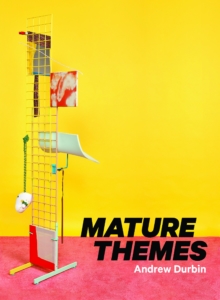 Andrew Durbin’s essays, strewn across the web-iterations of various art-world forums, offer a somber screen capture of the modern bourgeois subject — the individual, the ego, the monad — stepping calmly into a warm bath with her razor blade. Conversely, his first book-length collection of poems, Mature Themes, provides the same artsy-pop flash mob convergence, but in the form of a selfie. The composite voice occupying the book self-implicates, especially in the mandarin stew of consumerism and consumerist critique that brands the author’s 4G pronouncements. Set in a thin, near-flickering sans serif, the broadband data of his verses moves wirelessly among the various containers of contemporary poetry, from prosy blocks to single-line prison stripes and retro-Herbert Easter wings.

There is something a little too literal, too positivist, in the conceptual turn responsible for that edgy aura emanating from all ostensibly cultural enterprises that aren’t being willfully or winkingly retrograde, the post-object turn resulting in the programmatic nullification of artists and discrete works on the materialist technicality of social determination. The Anti- vibe — anti-art, anti-comedy, anti-narrative — is as foundational to mass presentations and campaigns, dependable and comforting as Springsteen at a Republican convention or multi-national corporations summit, as it is to the fine art intervention that can’t help but celebrate the institutional malaise it attempts to subvert. In ceaseless retellings, a clique elects a fool’s Midas who touches their hearts (those in on the joke) by railing the straw man dupe, projecting the doubts of the initiated onto a hypothetical exterior Oz of false wizards and blissful Munchkins. A bored affect displaces the properly melancholic disposition of earlier eras and, surprisingly, takes great pains to guard and sustain enduring concepts like “artist,” “poet,” and “work,” inside the self-designated art world’s fortress of esoteric knowledge.

Durbin’s poems radiate this bored affect while craftily unearthing a more traditional melancholy. It is a tricky gambit that for the most part avoids the perils of a post-Warhol race to the bottom while retaining a bookish romanticism that would certainly be taboo if not so carefully hidden from light. After all, artists of the digital age are supposed to be spending all their time on social media or they are disconnected from their times. It is as if they have joined the high school cafeteria’s popular table, geeking out in a cool programmer’s code of consumer critique that results in just another language of permission. Daring to invoke the canon, even the hip Leftist canon of an earlier generation, surely results in disqualification. But Durbin’s elegy of the ego everywhere wades in the moor of Adorno’s gloomy Minima Moralia, where “people who are no more than component parts of machinery act as if they still had the capacity to act as subjects, and as if something still depended on their actions.” The subject in Durbin’s present is dissolved into data and exported through Instagram, where its particles stream into the accelerating unidirectional flow of capital along with the fleur d’Adidas pixelated on its tracksuit. Introspection is an obsolete notion that assumes integrity, a solid body to palpate. Instead, Mature Themes searches for pieces of people in the streaming media as if panning for gold.

Admittedly, when Durbin approaches Katy Perry or Lil Wayne, the territory recalls something like David Foster Wallace circa Girl With Curious Hair, everyday characters chilling on a game show set with simulated celebrities, a brand of Image-Fiction Wallace memorably distanced himself from in his “E Unibus Pluram” essay, a supposedly fun thing writers never had to do again. What has changed in the ensuing twenty-plus years is that once-expert media connoisseurs have become entirely consumed. If, as Wallace wrote in the 90s, “television’s real pitch . . . is that it’s better to be inside the TV than to be watching, outside,” then the web provides the infrastructure to enable just that. The industry lingo for content across all devices is telling: TV Everywhere. In the narrative poem “The Canyons,” Durbin interprets Paul Schrader’s titular film from within as a co-creator, following the form of a pitch to the film’s producer. In “Landscapes Without End,” the collaborative ethos of the mature Web is, in turn, cautioned for its top-down command as Durbin’s speaker awaits Hurricane Sandy on his power-depleted phone:

Am I my own vision? I am stretched beyond it, but beyond that, other oceans we hadn’t known, lost continents restored in code. Where should we enter? The point where the digital camera clicks to record dusty boys playing by the side of the road? Weather in Google is fixed.

Fixed perhaps, but is there any possible way for artists to salvage their “own vision,” to make competent choices among the various rigid channels that would best serve the sharing of ideas? To confront these anxieties in a grown-up way is to acknowledge how innocent notions of originality or artistic freedom are, to some extent, adolescent abstractions. Nonetheless, Mature Themes often squirms in the mass culture maelstrom. By mapping the disputed territory between galleries and Google in a melange of relevant topics and dialects, the troubled strictures of social media seemingly accede to the interconnectivity of artists.

Durbin takes a respite from pop in “Monica Majoli,” an encounter with Majoli’s paintings at the dedicated scene of the 2013 Frieze Art Fair. In truth, he will get no further than exactly halfway through this mid-size poem before he finds himself ruminating on the King of Pop, but this through the mediation of critic-poet Bruce Hainley’s writings on Michael Jackson’s mangled features. As much an appreciation of Hainley as Majoli, the ode maps the circulations of thought that come to Durbin through the sensual perception of Majoli’s brushwork, with Hainley’s words — from the critic’s essay on Majoli — seemingly hanging in the air around the spectator’s head as ready receptors. Hainley is Durbin’s remote docent, beginning our encounter with Majoli’s sexually charged icons by first referencing Michael Jackson’s “face and its occlusion.” Earlier, Durbin described a Google image search for tennis stud Rafael Nadal as “radiating solar joy.” In the later passage borrowed from Hainley, we find a possible source for the expression, when from Hainley: “[Jackson’s face] became a brutal inversion of all the solar joy he beamed as a young performer.” This complex fabric of ephemeral objects and subliminal sources is effortlessly reproduced by Durbin’s mature style. We sense him caught in the whitewater currents of dataflow grasping for the tangible artifact, the painting or the print edition of a low-circulation art magazine.

to a sex without romance,

formats desire on these

the fantasy that drives it,

to match a present system

of behaviors we are already aware of

and introducing within its grid

a notional set of inputs

outputs. Nothing is veiled

in order to forefront

the point of the act

in the first place,

and from this the world’s

Here it is worth returning to Durbin’s art writing, specifically to his interpretation of recent developments in Net Art and Post-Internet — creations that are receptive to the Web’s overwhelming cultural influence and engage with online media, even while, in some cases, cultivating an offline second life in the gallery. Durbin detects a lack of critical awareness (or purposeful blindness), especially in how he sees some of this art “incorporating and aestheticizing accelerationist capitalist strategies of branded production on social networks.” Visual art that mimics advertising can’t be distinguished from actual advertising and so gains a secondary, unintentional audience. “We might consider leaving that strategy to corporate PR departments rather than continuing to use it to accent the conceptual discourse that surrounds art production today,” Durbin suggests. One example he cites is the art collective the Jogging, who crank out a high volume of Tweetable meme compositions that take cues from right-wing propaganda, images that Tea Party operators began displaying on their own Facebook pages “in earnest.” Though Durbin contends that a composition by the Jogging is still somehow operatively different from a message made by Tea Partiers for Tea Partiers (the former brings the outside non-art matter into the warm circle of art-art), the fact that content of such markedly different origins looks and moves identically is telling. It strongly indicates that the aesthetic is, as reported earlier, an aestheticization of similar strategies across social media.

In a further investigation of how the character of a message can be determined by a particular kind of medium investment, Durbin moves on to the “trend-forecasting group” K-hole, who advocate for a therapeutic dialing back of fashionable tech in night clubs to address “the migration of the Internet into the space of the real and its attendant culture of alienation . . . by proposing ‘Normcore’ as a new social category for the ‘strategic misinterpretation’ of the varieties of cultural ‘experience.’” Like students issued school uniforms, ravers who leave their iPhones at home are liberated toward a more communal IRL experience. But Durbin remains suspicious. If he has learned anything from utopian Web optimism, it is that there is always a political and economic structure behind any non-hierarchical pledge. “That structure,” Durbin writes, “is most thoroughly locked-in when it affirms that it does not exist, that within it you are ‘free’ to ‘lose yourself’ to communalized pleasures. But whose sameness are we opting into?” Yes, our carbon-based husks all step out of the shower looking more or less the same and sign on to seemingly equivalent accounts on shared billion-dollar networks, but then the invisible forces of privilege and brute power take over.

Mature Themes personalizes the superstructure by cribbing from the same cast of personalities that the structure thrives on. Perhaps this is Durbin’s own precarious instance of adopting corporate PR strategies, except that he manages to rupture the 2D sameness by introducing historical considerations that disturb our amnesiac omni-present. The poet finds his vision in reliable memory. How did Durbin, who self-doxes in one poem as a child of 1989 (as Taylor Swift would have it, the year of the year), come to be so fluent in our current digital fix while the rest of us remain clueless? The third poem in his collection, “Next-Level Spleen,” is a statement of purpose enclosed in an origin story. Durbin credits the Alicia Silverstone vehicle Clueless as the “visionary film that produced the frenetic self I embody today.” He places the site of the re-viewing of the film in a redundant coastal setting, visiting a friend during spring break, a girl, who like Silverstone’s Cher, has free reign over her house while her father is away on business. Cher’s navigation of blue-skied Beverly Hills is unimpeded, even without a driver’s license. Cher is peak Paris Hilton plus Jay Z and Kanye, privileged apathy to all obstacles that anticipates post-crash 1% decadence. Her slogan betrays a poetic efficiency:

“As if,” Cher says in the film a total of four times to vent contemporary spleen against those who misunderstand her. Get rich. Live life to the fullest. Destroy the world.

Durbin vents his spleen with a similar concision by plying the force of his prosaic language to unbend the Mobius Slinky of ideology and point it at the offending center of excess. The main conflict of the film is that Cher — in 1995, “on the cusp of GPS” — doesn’t want to go anywhere she has to know how to get to.

Not driving allows her to give directions, to be picked up, to be taken somewhere. It’s executive, easier — a non-problem.

Poets aren’t supposed to solve problems. Their ideal is the flâneur. Or, in the case of Durbin’s muse vénale, what he deems an antiflâneuse. Baudelaire, French father of modern poetry, was also an antiflâneur in Durbin’s estimate. He strolled the Parisian streets with financial backing from his mother, legitimating his idleness by sending her his decadent reports. In a vocation that keeps asking can poetry matter, Durbin wonders if it ever did and if anything does now.