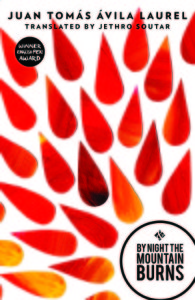 “I was not old enough to see such a thing, nor will anyone ever be old enough.”

Written in the repetitive and elaborate style of oral storytelling, Juan Tomás Ávila Laurel’s novel By Night the Mountain Burns reminisces about a series of events on a small island in the Atlantic Ocean, presumably recalling the author’s childhood home of Annobón off the coast of Equatorial Guinea. Translated from Spanish by Jethro Soutar, the novel dwells in language itself, musing over words that cannot be translated from the local language into Spanish. This untranslatability is amplified in the English version, as Soutar leaves an intriguing trail of words in the islander’s language and Spanish.

By Night the Mountain Burns reads almost as if it were a transcript of this storytelling, copied down with all of its moments of indecision and belated remembering. It is a melodic text rife with images of hollowed canoes and mist-enveloped mountains that would be almost too mythical were it not for the hilarious commentaries of the speaker. As much time is spent on discussions of bedwetting as of the local hospital, keeping the story more personal than historical. Above all, the narrator warns of eating chilis and not washing one’s hands: “Wham! Blowing on your lips, and ouch if you touched yourself where you shouldn’t.”

Laurel’s novel entrances the reader with its vibrant sense of place. Each of the characters knows every beach and path with such clarity that it feels as if each tree is recognized, when in fact, even the people are given no names by the narrator beyond that of their role in the community.

By Night’s narration loops back on itself, finding new details in its retellings. As the story circles round, certain words and phrases become familiar, even comforting, like the musical call and response used to haul a new canoe down to the shore:

In a plot that meanders unpredictably, such repetition grounds the text for its readers just as the song helps guide the characters within the story. These sounds resonate through the island where everyone is connected to everyone in some way.

Stories as momentous as the making of a new canoe, as brutal as a murderous riot, as horrific as a cholera outbreak perpetually resurface in the novel. The narrator returns to these moments of rupture in his community, perhaps trying to process them through repetition. If these moments can be difficult to read, it is because they mean so much.

Himself a political activist, Laurel thoughtfully portrays of a community deeply influenced by imperial powers. Scarcity dominates island life; too few men means too few fish and items such as cloth, kerosene, and coveted tobacco arrive only on unpredictable, “friendly” foreign ships that leave more behind than cigarettes. Although the trade ships carrying rum and fishing line come all too rarely, the resident white Padre, the western-educated doctor, and the Spanish-obsessed schoolmaster, perpetuate colonial ideologies between shipments. The novel’s real interest, however, lies in its sensitive representation of these roles, their powers (and lack there of), and the fusion of cultures.

When cholera rips through the village, Laurel marks a cross on the page for every person buried and lists the name of each dead adult (children don’t have fixed names). This poignant page of names remembers each of these people in his or her particularity, rather than as some easily skimmed-over statistic, illustrating the greatest strength of the novel: its care for each individual within the community. Remembered in Laurel’s novel by a child too young to attend funerals, this tragedy is a space of confusion as much as it is one of sadness. “With so many of our adults crying, we lost the will to eat,” the narrator explains, “and when we did eat the food tasted bitter, because of all the crying, the bitter taste of tears.”

Reading By Night the Mountain Burns is like listening to an old man tell a story that is so clear to him that his eyes look out through his child self onto a world he no longer inhabits. The novel’s multi-faceted narrator drives the novel; he is an adult, yet one still pondering questions that infused his childhood. At the end, the narrator expresses the hope that this story might be found by someone else who inhabited this small island with him. It is not a text of voyeurism or tourism; it is a text for remembering together.