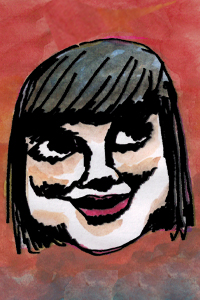 Helen Stuhr-Rommereim edits the blog at Full Stop. Her monthly column discusses literature written by people from outside the USA.

As a small child, I sometimes used to sit and wonder: how is it that I have this name and brain and life, that I have these parents and live in this town? Where do the thoughts that I think come from? What machinations of the universe brought all the things that constitute me into existence in this particular arrangement of body parts, family members, and geography? Slowly coming into consciousness, I became aware of my mind taking shape as a specific, individuated organ producing thoughts that, it would seem, belonged to me and me alone.

With age, I didn’t find answers to the questions, but there was an acceptance that set in. I got used to being my self.

In Soviet author Andrey Platonov’s 1936 short story, “Fro,” the title character, her life thrown into suspension as she suffers the absence of her beloved husband, considers a little orphaned boy who plays the mouth harp, and compares his situation to her own: “He had not yet singled out from the whole world a one and only thing for eternal love; his heart beat empty and free, not stealing any of life’s goods for itself alone.” Fro struggles to disconnect her love from a single other individual, and looks at the child’s mode of awareness as an idyll where consciousness and desire are still not completely solidified and individualized.

In another story, “The Cow” (from the same collection, Soul), Platonov writes of how this gentle beast experiences grief in a purposeless, shapeless, helpless way: “Her dim mind did not have the strength to help her deceive herself; if something had once entered her heart or her feelings, then it could not be suppressed there or forgotten.” Her calf taken to slaughter, the cow drifts towards the railway tracks, and to her death.

It might seem unreasonable to attribute grief to a cow, but in Platonov’s stories plants, animals, and inanimate objects are granted a particular kind of passive agency; the fact of their existence entails a kind of engagement, if not intention or choice. The cow has no self-awareness, but the fact of its existence implies some amount of living intelligence, an intelligence that can be affected by loss.

There’s an important difference between this consciousness-in-potential that extends from children to cows in different ways, and a more anthropomorphic endowment of plants and animals with a human-like isolated, command-center consciousness. In a recent article in the New Yorker, “The Intelligent Plant,” Michael Pollan explains advances in understandings of how plants perceive and process information. The idea of “plant consciousness,” has held some appeal among new-agey circles for decades, going back to the 1973 book and movie “The Secret Life of Plants.” But really considering what thought might look like for a plant means getting out of a Cartesian conception of mind divided from body, preceding one’s physical existence. Descartes argued that only humans possessed self-consciousness, as Pollan also points out, but calling plants “conscious” takes Descartes’ solipsism, reserved especially for humans, and imposes it on plants as well.

Pollan argues, through a combination of science and common sense and a little bit of philosophy, that it might be necessary to grant “intelligence” to all living things, but this means understanding the intelligence of plants as operating entirely differently from human intelligence. Plants perceive on a different time scale, they respond to changes in their environment by creating various kinds of chemicals, their array of senses is expansive, they exist in a perpetual state of hyper-reactivity. That is to say plants are, it turns out, alive. Life is alive, a mesh of experiencing, adapting, evolving, feeling forces. As Pollan writes, “Brains are just one of nature’s ways of getting complex jobs done, for dealing intelligently with the challenges presented by the environment. But they are not the only way: ‘Yes, I would argue that intelligent behavior is a property of life,’” he concludes, quoting one plant-intelligence researcher’s assertion.

The question of what constitutes intelligence, and the complex answer that emerges when one attempts to account for the intelligence of plants, provides a useful window into the particular utopian vision put forth in Platonov’s stories. Platonov’s writing comes with an acute sense of the potential for misery and disappointment in any and all human lives. In “The River Potudan,” he writes, “Not every grief can be comforted; there is a grief that ends only after the heart has been worn away in long oblivion, or in distraction amidst life’s everyday concerns.” The stories he tells show that to be true and insurmountable — almost.

The stories in Soul, written mostly in the late 1930s, were part of a turn in Platonov’s writing away from earlier, more explicitly anti-Stalinist work (for example, the novels Chevengur and The Foundation Pit, in which a part of Platonov’s project is a pointed parody of Soviet propagandistic language) to more realist, apparently domestic concerns, with an emphasis on interpersonal relationships and family life, and on poverty, loss, longing, and disappointment. Platonov’s work is deeply political, but in his later stories, written in the wake of the most brutal waves of Stalin’s repression, the politics are shrouded in the everyday, and that everyday is very sad. Nonetheless, these tales of human hopelessness and tragedy contain moments of connection and togetherness that provide a hint of a different kind of future, of the stuff of living that keeps hearts beating. That hope lies in a vision of humanity that you could say starts to look a little like the plant that, with a distributed and interlinked awareness, “can lose up to ninety per cent of its body without being killed,” as researcher Stefano Mancuso, quoted by Pollan, explains.

Platonov was influenced by the 19th century Russian philosopher Nikolai Fedorov, whose futuristic and eccentrically Christian ideas have also inspired thinkers as notable and diverse as Konstantin Tsiolkovsky, a founder of rocketry and aeronautics, and Ilya Kabakov, one of the most celebrated Russian artists of the post-Soviet era. I give these credentials because although Fedorov’s ideas were very strange, they also offer a rich and transformative way to view the world.

Fedorov’s primary aim was to rationally think a way out of death. In service to this project, he argued for a move towards greater human unity and kinship, to fight against entropy, dissolution, and decay. All divisions and differentiations between people, Fedorov saw as toxic. But he wasn’t calling for conformism, rather “brotherhood” as a deep and guiding principle of existence. In his book The Philosophy of the Common Task, he writes, “By refusing to grant ourselves the right to set ourselves apart . . . we are kept from setting any goal for ourselves that is not the common task of all.”

The possibility for undifferentiated, undirected love, love embedded in the unity of humanity, is a concept that Fro, to return to Platonov’s story, struggles with directly as she grapples with her singular desire for the presence of her husband. He, in contrast, insists on leaving her to work for the collective good, building Socialism far away from her, on the other side of the country. After her husband has left, alone and lost, Fro wonders about the personal versus the universal, about giving one’s love and energy to society versus keeping it tied up in another, about putting her personal happiness above collective good. Platonov doesn’t resolve this conundrum or cast judgment on Fro, but leaves it as an open question. She ponders, “Maybe she was foolish, maybe her life was worth only two kopeks and there was no need to love it and care for it, but then she alone knew how to transform these two kopeks into two rubles.” Ultimately, she tries to find a way to love humanity through her love for her husband.

Fedorov wrote, “The exclusive attachment to a woman leads the man to forget his fathers, introduces political and civil strife into the world and, at the same time, makes man forget that the Earth is a heavenly body and that heavenly bodies are stars.” For Fedorov singular, couple-bound love causes humans to forget their relationship with nature and the universe. But Platonov writes of the personal struggle that emerges with an attempt to actualize Fedorov’s utopia.

In “The Return,” a father who has been absent from his family for the duration of World War II comes back to finds himself alienated from his wife and children, observing with hurt and selfish anger how their lives have gone on without him. He boards a train to leave behind his family once and for all, and sees two children running after the train, tripping and falling and beckoning for someone to get off and come back to them. They are, of course, his own children, but in the moment of disassociation from them, seeing them for a second as strangers full of hurt and need, he is able to love them again. And with that love, “He suddenly recognized everything he had ever known before, but much more precisely and more truthfully. Previously, he had sensed the life of others through a barrier of pride and self-interest, but now, all of a sudden he had touched another life with his naked heart.” In these stories, particular and universal love are connected; they exist in tension, but with the potential to create pathways between each other.

Plants and animals, grief and happiness, love and entropy, all dance around each other in contentious, unbalanced communication. Platonov’s utopia through radical intimacy comes out of an almost animist relationship with the world, where beings and objects exist together at different levels of consciousness and alienation. Becoming an adult, or falling in love, can come at the expense of a person’s most pure humanity, the humanity that Fedorov sought to make eternal through uniting it into a universal oneness. Like the plant that can lose all its leaves and still lives, because its thought is everywhere in every one of its cells, this united humanity moves towards immortality.

Back in my childhood, in another, opposite sort of existential thought-experiment, I would sometimes concentrate very, very hard in the backseat of the car with my parents, on the way to see a movie in Des Moines or eat Indian food in Iowa City, and see if I could make myself feel like the vehicle I was in was moving backwards. Loosening my awareness from my head into all the little cells of my body, I would try to trick myself and dissolve my motor senses and knowledge of the reality around me.

If I could unthink the world hard enough, I could feel pure motion.