The Last Days of My Mother – Sölvi Björn Sigurðsson 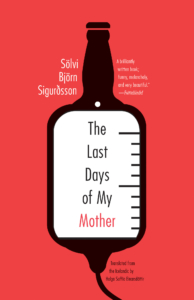 As a book of drinking, endless binges of drinking, and of constant comedy, The Last Days of My Mother is a perfect book to drink to, reminding you of the shame that follows the pleasure, but comfortably letting you know that you aren’t drowning like the protagonists. In the opening pages, Sölvi Björn Sigurðsson’s two protagonists, Mother/Eva and son/Trooper, do not have the same self-censorship that most of us have, and their adventure is all the better for it. Neither seems to manage happiness, but with Eva dying, Trooper sets himself the goal “to make Mother happy during the last days of her life.” Uninterested in attempts to cure her cancer or extend her life, Eva refuses treatment. Trooper (not his given name, but his mother’s nickname, and given it comes from a place of love, and I’ve grown to love him, I’ll stick to it), the loyal son, grumpily accepts, does some research, and takes them to Amsterdam to a clinic, Libertas, where she will try a miracle cure, and barring that, be allowed the peace of euthanasia. This will be their pattern throughout: willful mother, forging on ahead, bullying her son into following, while he then takes care of the smaller, practical details of anything resembling a plan.

Even in their humor, these roles hold. On the second page, dealing with airport security, Mother is having none of it: “Nine-eleven? Do we all speak American now? Do you mean November 9th?” Then Trooper, recounting his recent, ongoing depression and where it has taken him: “My intoxication was such that I had difficulty discerning the gender of the person and didn’t realize until I was alone again that whoever it was had been sexually stimulated by beating me with a stuffed animal. The experience was unpleasant, but necessary for my personal growth.”

Their efforts only resemble plans because for the vast majority of the novel, they are in varying stages of drinking, drunk, very drunk, stoned, and planning their next drink. Throughout it all, there is dark, brutal comedy, hysterically playful comedy, and immediate switches to the serious, the poignant, without pain from whiplash. The emotional, the ongoing sadness of loss, of dead hopes, isn’t a contradiction to humor; instead they exist together, and the closer they come, the less Eve and Trooper struggle. Comedy, with all its nuances, is sometimes impossible to communicate between two people who speak the same language, so translator Helga Soffía Einarsdóttir keeping it so alive proves great skill. Last Days is a book funny enough that my housemates laughed at my laughter while otherwise quietly reading, without reading a word.

Drinking novels are familiar, death of a family member novels are familiar, dark comedies, familiar, but Last Days brings something new: a mother and son with absolutely zero boundaries between each other. Trooper, looking back on his absent father, knows one thing: “he had the perfect cock. This I deduced from a carved ebony dildo Mother kept on the top shelf of the living room cupboard, and which she’d taken down on my thirteenth birthday, handed it over to me with gusto and said: ‘This, Trooper, is your father’s penis.’” At other times, Eva displays a discomfortingly heartwarming mixture of motherly concern and the cruel ball-breaking of a best friend, as when she tells Trooper “unless you’ve been molesting the furniture it seems pretty clear that the only pleasure you’ve had in that area is that which you give yourself.” This openness, the abandonment of ridged, traditional mother/son roles is essential to their happiness together, and to either of them finding any fulfillment in their pre-death binge, as Trooper well knows: “She had a knack for putting the events of my life in context; the harsher the statement, the truer it rang.” Yet the proof of his wanting the safer roles shows through when we realize that though as a narrator, Eva is always “Mother,” when Trooper speaks to her, she is ever Eva. It’s in his private space that he can call for her as Mother rather than as drinking buddy.

In Amsterdam, they befriend others at the clinic, patients, including one who apparently resembles Milan Kundera, according to Eva, “the most beautiful man I’ve ever set eyes on; Dr. Frederik, who runs the clinic; Helena, the daughter of the Kundera look-alike; Steven, the doctor’s son and provider of copious amounts of marijuana, to take that edge off of drinking; and eventually a professional match-maker, Gloria. Quickly, Amsterdam becomes like a small town, and the characters a group of close friends. The welcoming community is one of the true positives of The Last Days of My Mother. As much as the humor is brutal, and Trooper’s life looks bleak and his mother’s short, the raucousness, the warmth and liveliness of the characters make it an often joyful novel.

This joyousness is driven relentlessly forward by Mother herself, infectious to the rest. Sometime before the start of the novel, in the midst of relentless shopping, she is diagnosed with a toxoplasma infection, causing loss of impulse control. In her mind, this can only be a good thing, “The fact of the matter was that Mother was not at all displeased with her toxoplasmosis; she just wanted it to be crystal clear who was to blame when she returned from a trip into town with a seventy-thousand krónur, 100% silk pashmina.” As her death approaches, she has two aims: to have one last worthy lover, even if it means going to a Nazi ball and dragging her son along, and for Trooper to somehow learn from her, to be positive about anything, even if it’s self-destruction.

Instead, Trooper is so defeated, so passive, that he’s a man who can catch crabs from a prostitute without even having sex with her. He sees a world against him, against life, “Even here in Amsterdam you could find buildings that were acts of terror towards people with human emotions.” As the Icelandic economy crashes, fault resting on the shoulders of extravagant bankers, the most Trooper can muster is disgust, vague disgust, watching a party of bankers head over to that Nazi ball. This is a man who looks in the mirror and, in that outlandish, hysterical humor he learned from his mother, describes his body:

My torso actually resembled another face: the eyebrows of the red nipple-eyes had not been groomed for a very long time, the round bellybutton-mouth was slightly droopy and adorned with a mustache, surprised by an ever-expanding chin that seemed to stretch further out into the world, munching on the only organ of mine that had the slightest potential of having an impact on the future.

Part of this stagnation is the support system that keeps his blood moving at all: his love for his mother and her love for him. Trooper looks for allies against her, because he wants to change her life so that he can change his, but when her charm wins them over without dragging them down, he continues his despairing binging. Their shopping, drinking, smoking, and half-assed attempts to get laid continue, and become a new version of the utterly mundane. Trooper recognizes this effect on himself clearly, “The mundane seemed to rule both my body and soul, not unlike a cold.”

As Trooper becomes tired, as we wonder just how long Mother can continue on, how their bank account can keep up, how much longer till the complete collapse of the Icelandic economy, everything that works so well in Last Days threatens to lose the entertaining edge. Fortunately, Sigurðsson doesn’t just know laughs and the complexities of being a singular human in a society with little tolerance for that; he also has a keen sense of plotting. Right after some calmness is settling on, as drinking abates and healthiness seems possible, as Trooper senses “that we had something new and unforeseen in store for use,” the inevitable happens. The miracle cure fails (it is named Ukrain after all . . .), and all that is left is the decline before euthanasia.

Instead of being with Mother when she most needs him, when he most needs her, Trooper quickly runs, hides. Isolated, he becomes more depressed, more obsessed with his past, yet begins to find a certain clarity: “The havoc we wreak upon our own body makes sure no one ever suspects you to carry such primeval grief; that behind the calloused skin, guilt the size of a small child still survives.” Trooper’s endless spending, his avoidance of phone calls from his Amsterdam family, that botched visit to the prostitute, become a true journey. He may be low enough to vomit on the street, but it is “between car bumpers that exchanged information about my soul.” At this point, Trooper is the most unexpected of the men with a thousand faces. He is on the hero quest and knows it, “I was going to discover a new continent and become a pioneer, fight the beasts of the underworld until I died and was reborn, more powerful than before.” When he comes through the other side of his ruination, he will be a man ready to abandon his mask, accept his broken self, and be with this new, odd, caring Amsterdam family.

The Last Days of My Mother could not be honest to its depth if it were to commit to a happy ending, to a satisfied, new Trooper. In the way that it neither avoids that which must be taken seriously — cancer, the right to a peaceful death, the greed and lack of compassion that led to economic devastation, the confusing paths of sexuality — nor confronts them with announced agenda, but instead laughs again and again, Sigurðsson and Einarsdóttir open the book up to life, to the wonderful characters, capable of great kindness. These moments, of odd humans simply being there, responsive to other odd humans, relieve the tension behind all that humor, and are what the hero returns to after his quest, hopefully seeing more clearly than before.

The Physics of Sorrow – Georgi Gospodinov