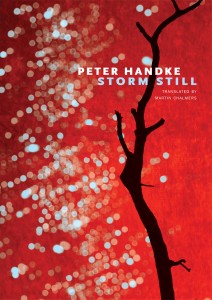 It is not uncommon in discussions of Peter Handke’s work for both Handke and literary critics to refer to a “text” of his rather than to a novel, a play, or a memoir, which seems the best way to regard the latest work of Handke’s to be translated, Storm Still. This text first reached audiences as a play (performed in 2011) but is now being published as a book that can just as easily be read as a short novel (although its origins in the theater are apparent enough in the book’s structure as a series of spoken set-pieces). The book’s dual nature as both play and a form of prose fiction (a “read drama”) is its most immediate confirmation of Handke’s status as a formally adventurous writer who doesn’t so much experiment with form or create new forms as disregard the rules and requirements of established forms altogether in favor of a less constrained practice of “writing.”

Readers will readily be able to discern that this text was written to be performed. But a reliance on speech — both monologue and dialogue — has long been a distinctive feature of Handke’s novels so that Storm Still will certainly seem recognizable as Handke’s work to those familiar only with his novels, while at the same time, will exemplify many of Handke’s preoccupations and literary strategies for those readers not much familiar with his previous writings. Its relative brevity aligns it with some of Handke’s best known books such as The Goalie’s Anxiety at the Penalty Kick and Across, both of them novels of fewer than 150 pages, although it is certainly more compact than Handke’s bulkier novels such as My Year in the No-Man’s Bay and Crossing the Sierra de Gredos. Like most of Handke’s work, both plays and novels, this book is essentially plotless, although that doesn’t mean nothing happens, or that what does happen is of minor importance. Indeed, “what happens” in a Handke text often rises to the level of the allegorical, but he does very little to organize his narratives according to the artificial requirements of “plot.”

Another way of describing the allegorical nature of Handke’s stories (which usually do have beginnings, middles, and ends) is to note their dreamlike qualities, the way in which the borders of “reality” are not strictly patrolled. At the beginning of Storm Still, the narrator draws our attention to “A heath, a steppe, or steppe-like heath, or wherever. Now, in the Middle Ages, or whenever.” He recalls images of this scene from his childhood, and then opens his eyes to see that

. . .My forebears are approaching from every side, with the typical Jaunfeld gait, one foot firmly following the other. Each one comes along alone, except my grandparents as a couple, alone the more or less or perhaps not at all deranged sister of my mother, and likewise, walking alone, their three brothers each one on a separate path or not-path. The youngest is doing somersaults, rolling along, as if in high spirits. Each one makes for the place to stand that seems prescribed for them, again apart from my grandparents, who sit on the bench. . . .

Although clearly enough this appearance of his forebears is a phenomenon of the narrator’s own fancy, it is not uncommon in Handke’s other, more obviously “realistic” novels that palpably strange, sometimes surreal or fantastic scenes or events emerge in relation to characters and situations otherwise grounded in recognizable reality. Quite often Handke’s narratives feature a writer character (often exhibiting clear similarities to Peter Handke) whose presence metafictionally reminds us that writing shapes and transforms experience in order to clarify it, even if that means leaving its literal depiction behind. Handke’s work manifests a remarkable freedom of approach, ignoring most formal and narrative conventions, while at the same time always seeming carefully composed.

Thematically, Storm Still also has strong affinities with Handke’s previously translated fiction. The “heath, steppe” or “steppe-like heath” (with its echoes of King Lear, clearly signaled in the book’s title) where the narrator’s forebears manifest themselves is the Jaunfeld Plain, the ethnically Slovenian region of Carinthia in southern Austria. This is a common setting in Handke’s work — Carinthia is Handke’s home region, and he is himself of mixed German and Slovenian descent — and there are enough similarities between the family members invoked in Storm Still and characters featured elsewhere in Handke’s fiction that it would seem justified to conclude that the family represented in this book is a version of his own. Perhaps Handke’s most concentrated previous treatment of the “borderland” of Carinthia and its Slovenian roots is in Repetition, which chronicles the journey of a young man, also from Carinthia and of Slovenian descent, across the Austrian border into Slovenia proper in search of a brother who had himself crossed into Slovenia years earlier and not been heard from again. Most of the narrative is taken up with the ways in which the young man (who narrates the story as an older man) comes to be aware of and appreciate his Slovenian heritage, as well as his brother’s action in deserting from the German army during World War II.

Storm Still is framed even more directly as an attempt to consider this mixed Austrian/Slovenian cultural inheritance. The narrator’s forebears provide accounts of the family’s history, focusing specifically on events before and during World War II. Their testimony concerning their own actions works to portray the Slovenian Austrians as offering resistance to the Nazi occupation of Austria, one of the uncles in particular actually joining a Slovenian-based resistance group “in the mountains” after he too defects from the German army. If Repetition ultimately transcends its travel narrative form to become a powerful rendering of its narrator’s discovery of identity, both familial and existential, Storm Still seems more directly the attempt to recover the Slovenian presence in Austria, the distinct cultural legacy of the Carinthian Slovenes, and especially their defiance of the Nazi-imposed anschluss. It is also a moving meditation on memory and loss, culminating in the final image of the narrator and his vanishing forebears receding from each other, “recognizable at most by the movement of our hands as we still wave to one another.” But certainly the strongest impression the book makes (an impression probably even more pronounced when the work is performed theatrically) is in its invocation of a minority culture that might otherwise remain invisible.

For readers familiar with the controversy in which Handke was embroiled when he seemed to defend the government of Serbia as it was committing atrocities in Bosnia and Kosovo, this work might plausibly help to put Handke’s actions, which might otherwise seem inexplicable, in a more comprehensible context. Handke’s attachment is not to Serbia, but to the former Yugoslavia, as a part of which the Slovenes presumably were best able to express their cultural identity — Handke apparently prizes especially the linguistic diversity within cultural commonality that characterized Yugoslavia, especially as a sign of the South Slavs’ refusal to accede to the domination of Austria and Germany as centers of “European” influence. Whether this quasi-romanticized view of Yugoslavia (according to which all of the South Slavs at one time “just got along”) elevates either Storm Still or Handke’s rhetorical interventions in the Balkan wars to more principled efforts to preserve the dignity of its people is open to dispute, although that Handke sincerely holds such a view seems less so.

The hybrid form of Storm Still, however much it might contribute a kind of dramatic immediacy, also unfortunately affords us much less of the most consistently compelling and satisfying feature of Handke’s works of fiction, his prose style. (The prose of Storm Still is much more purely functional, the non-spoken passages often a more extended form of stage directions.) Even in translation, Handke’s prose has a distinctive quality — it is simultaneously precise and unconstrained, highly attuned to the concrete and the “real,” but also almost mystically reflective. The protagonist of Slow Homecoming (translated by Ralph Manheim) stands on a river bank:

The dried shore mud at his feet had broken up into a far-flung network of almost regular polygons (for the most part six-sided). As he examined the cracks, they began little by little to work on him, but instead of fragmenting him like the ground, they joined all his cells (a void that he hadn’t noticed until then) into a harmonious whole. Something that rose from the split surface of the earth struck his body and made it warm and heavy. Standing there motionless, looking out over the patterns, he saw himself as a receiver, not of news or a message, but of a twofold force received on the two levels of his head. On his forehead, he felt the bone disappearing, simply because he had no other thought than to expose this obstacle to the air. . . .

The mud cracks form a network specifically of polygons, predominantly “six-sided,” at which the character, Sorger, is clearly staring intently, closely attending to the appearance of the mud. But the effect on Sorger, although clearly profound, can only be expressed in the rather vague notion of a “harmonious whole.” “Something” rises from the ground to make Sorger’s body “warm and heavy,” but this thing remains a feeling, not a “message” that can be articulated. If Sorger is the ”receiver” of an intangible communication from his surroundings, it is again manifested in a very tangible way, a “twofold force” to the forehead causing him to feel “the bone disappearing.” Interludes such as this are the real focus of interest in Handke’s fiction. While it may seem that, taken as story, nothing is happening in a Handke novel, much is happening in moments like these. In the interaction between character, world, and the writer’s attempt to reckon with the encounter between self and world through purposeful language (which always might fail), consciousness happens.