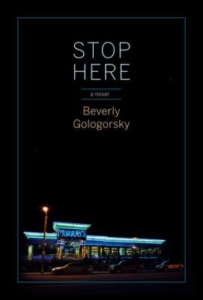 There’s a particularly American sort of isolation, a way of being alone while in a group, that can be seen most clearly at a twenty-four-hour diner during the thin hours of night. No squalor or violence present, just the sinister hum of neon and the clanking of coffee spoons as strangers politely sink to the bottom of their own personal hells. It’s that same rootlessness and dissatisfaction that the painter Edward Hopper mined so thoroughly. You see it of course in his most famous work, “Nighthawks,” but it’s really present in everything he ever did. It’s a consciousness of sinister despair in the angular shadows of a building. It’s in the way two people leaning towards each other in conversation seem to be engaged in an existential conspiracy. It’s how a broken aerial jutting off to the side might be a thin finger pointing towards oblivion. This isn’t necessarily realism that we’re dealing with, but a very realistic look at the way depression soaks through the American landscape. Stop Here, Beverly Gologorsky’s second novel, is a sort of literary Hopper painting. She works in a simple and very naturalistic mode that moves beyond mere realism in the same way that “Nighthawks” suggests meaning beyond the simple plot of its image. Stop Here is about average Americans who are haunted. Money, death, regret — whatever torments the characters of this novel also thickens the atmosphere with an almost spectral presence. To say that Gologorsky is a master of mood would be an understatement.

The plot of Stop Here orbits around a diner called Murray’s and a handful of characters who are connected to the twenty-four hour Long Island dive. Most of the focus is on three waitresses and their families. There’s Ava, haunted by the death of her husband in the first Gulf War. Doing her best to raise her fatherless son, she leaves herself vulnerable to romantic betrayal in a heartbreaking way. There’s Mila, whose daughter thinks that enlisting and serving in the war is the only way out of their claustrophobic town and on to a better life. And there’s Rosalyn, an emotionally wounded cynic who augments her income from the diner by moonlighting as an escort. These three women and their everyday, but nonetheless epic, struggles account for the bulk of the novel but by no means the entirety of the cast. For instance, one of the most interesting characters in the book is Sylvie, the new wife of the relatively (at least as compared to his employees) wealthy diner-owner Murray. Sylvie’s unfulfilling marriage to the Neoconservative and loutish Murray is perhaps one of the most intriguing relationships in the entire novel. Left at home, bored and unattended upon by her husband, Sylvie discovers an elderly artist living in a seaside lean-to who appears to be on the verge of death. Their conversations, though meandering and strange, give us one of the most emotionally direct relationships in the entire novel:

He hands her a bunch of paintings as easily as if they were sandwiches at a picnic. Winter beach scenes. White, gray, silver without a drop of color, yet they shimmer. Could these be the landscape she finds so forbidding, cold, and untouchable? She catches him staring at her.

“No. The opposite. Is that how you really see what you see out there?”

“There’s no metaphor for the ocean, only how I feel when I try to capture it.”

“In this one the waves are ferocious. They’re filled with warning . . . ”

“Because my fingers were stiff and my knees hurting, the waves spoke to me of what’s impending.”

“Was that depressing?” Is she probing?

“At my age death is a comrade, a way of leaving, an exit.”

“I don’t believe everyone your age feels like that.” Nothing about him seems tired or worn, though he must be near eighty.

“Maybe not. But there isn’t much I’ll miss. I love the beach, but I’m alone now. Do you have children?”

The sea, the sky, his death, his son’s. He says it all in the same matter-of-fact way.

“How awful,” she finally says.

“It was worse than that.”

“…without a drop of color, yet they shimmer.” The same could be said of Gologorsky’s prose. And this chance encounter with a hermetic quasi-mystic on the beach doesn’t only serve to broadcast where most of the characters could very well end up, but also serves as a sort of spirit of the novel itself. He’s the physical embodiment of the crushing desperation that has come to rule the lives of these very flawed, yet very sympathetic, characters.

Unlike some of the recent works of war fiction by and about soldiers, Fobbit and Yellow Birds, for example, Gologorsky’s exploration of the suffering caused by American wars isn’t soldier-centric. Moreover, she isn’t just asking us to take notice of how Americans suffer financially, emotionally, and physically — she’s asking us to care. This is a tender book whose spare and suffering prose masks a big, bleeding heart. But what gives the book its tension, its bite, is the unresolved concern that our sympathy might not be enough.