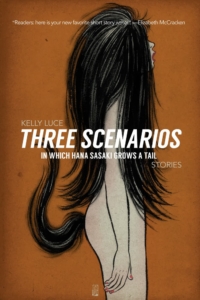 Three Scenarios in Which Hana Sasaki Grows a Tail is not only the first collection from Austin-based writer Kelly Luce, but also the first book from Austin’s new independent press, A Strange Object. This revelatory debut that orbits around Japanese themes has been compared to the work of Haruki Murakami, but it has considerably more heart. It also evokes Karen Russell with similar deftness when handling the adolescent voice in all its heartbreaking transparency. I would happily suggest that Luce contributes as much to the contemporary renaissance of the short story in her first work as Russell, Aimee Bender, and George Saunders have with their recent masterpieces.

In an interview with the Rumpus, Karen Russell describes short story collections as a singular way to “come at some of the same themes and preoccupations from different angles, sort of like turning the facets of a little jewel.” In Hana Sasaki, motifs recur as blips on a radar, subtly flickering in the reader’s subconscious, especially apparent when the collection is read ravenously as a whole. In subsequent stories, a unique word is reused in another character’s mouth. A quotidian image is re-seen by other eyes. A tail repeatedly sprouts out of a different girl’s backside. These repetitions function not as an overwrought device to tie the stories together thematically, a trap so easy to fall into. Instead, they evoke a multitude of dimensions and alternate realities. The reader is forced to ponder how much these stories exist in the same universe. Are they in fact aspects of parallel worlds, past lives? Such is the mysterious and haunting intrigue of Hana Sasaki.

Compact and economical, it is hard not to consume Hana Sasakiall at once as a light but satisfying meal. Its simple construction allows for bright truths to emerge from the page, unencumbered by showiness. Between stories of a death-divining toaster and the titular tail of Hana Sasaki herself, Luce elegantly walks the tightrope between magical realism, the supernatural, and the strange in the everyday. Alienation, love, fate, and magic are major pillars of her tales, and Japan is the perfect overarching pattern. Americans are placed in Japan; Japanese into America; square pegs coming to grips with round holes. Communication is fraught, whether it’s the problem of the correct usage of the word ‘broken’ vs. ‘broke’ in “Pioneers,” the misspelled Clam Island in “Cram Island,” or the quantifiable capacity to express love in “Amorometer.” The dialogue is sparse and minimal, pared down to the essentials, just like Luce’s masterful storytelling.

“Rooey” stands out as the most complex and personally bewildering piece, as well as one of the longest. However, it wouldn’t have quite the same impact without being flanked by world-building and aura-enhancing stories, ranging from three-page slices of life to lengthier surrealistic scenes. “Rooey” puts all of Luce’s greatest strengths in a blender and presses ‘pulverize.’ The result is an intensely moving but confounding story about a young woman grappling with her brother’s death, becoming increasingly obsessed with the girlfriend he left behind. With simple but meticulous storytelling, this piece blurs the lines of identity in the face of wrenching trauma. I re-read the last page, composed only of three sparse sentences, over and over and over, completely floored.

This small but mighty debut has a quiet power that’s hard to shake. If you’re like me, you will surely carry Hana Sasaki’s multitude of peculiar, jewel-like facets inside your head weeks after you turn the final page