My Father’s Ghost is Climbing in the Rain – Patricio Pron 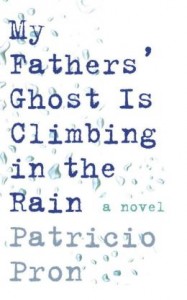 Patricio Pron’s book My Father’s Ghost is Climbing in the Rain, the first by the young Argentine author to be translated into English, is one of those novels that seduces the reader into reading it as an autobiography. Notable material details of the narrator’s life resemble those of the author’s — he’s a writer, and his parents are journalists. In fact, Pron has written on his blog that most of the events of the novel are true. But perhaps more than any of this, what most strongly persuades one into this reading is the realistic way the narrator writes about his family history, one that is shaped, like that of so many of his contemporaries, by decades of state terrorism in Argentina — and in this case, parents who fought against it. Pron invites his reader into a slippery, liquid landscape, an unstable structure built on trauma and uncertainty, one just barely held together by its own surface tension, but vulnerable to the slightest pressure. The landscape gradually solidifies as the narrator begins to uncover a family history that has, until this point in his life, been only obliquely present. Pron’s novel weaves out of all this instability a beautifully fragmented book about the difficulty of locating tragedy in the post-traumatic worlds of nation and psyche, and the difficulty of writing when one’s own story has been broken.

When we meet our narrator, he is returning home from living abroad, having learned that his father has been hospitalized. The return is also a return to consciousness. The narrator emerges from a deliberately medicated haze as he returns to his family home, and begins to sift through his father’s papers only to find a story that needs writing — a mystery of which his father is the writer, the protagonist and, in a way, the victim. The psychological complexity of the story in My Father’s Ghost is distilled into lucid, simple prose and discrete, numbered paragraphs, which in turn are organized into four numbered sections, each with an epigraph. Though the paragraphs have a simple, satisfying solidity, the narrator himself swims in and out of clarity — lucid prose does not always indicate lucid meaning. Often, the narrator seems to emerge out of his cryptic fog only at the end of a paragraph, arriving at an insight, an accusation, or a truth at what seems to be the last moment, as time runs out and there’s no way to continue. Of course, a paragraph’s end, one would think, is under the control of the narrator; this seeming ability to face something only in the moment before it must be abandoned is an artifice that suggests a sense that narrative is unbearable. The truth at the end of a paragraph comes with such violence that its only proper sequel is silence.

Some paragraphs in the book are just lists — for example, a list of books found on his parents’ bookshelves, followed by a list of authors they’ve never read: “Once again: my parents haven’t read Silvina Bullrich, Beatriz Guido, Ezequiel Martínez Estrada, Victoria Ocampo or Ernesto Sábato. They’ve read Jorge Luis Borges, Rodolfo Walsh and Leopoldo Marechal […] One could spend hours thinking about this.” One could spend hours thinking what about this? The list of authors is an attempt at defining the borders of a world, but it’s unclear what this world means, why it matters. Does one of these lists correspond to the world the narrator describes earlier, a world of “books by those dead writers I’d read when I was a poor teenager in a poor neighborhood of a poor city in a poor country and I was stupidly insistent on becoming part of that imaginary republic to which they belonged, a republic with vague borders”? This world is one that has rejected him, or that he has rejected himself from. And furthermore, it is a world separated from him, and from his entire generation, by death: “That a writer could be Argentine and still alive is a fairly recent discovery and still shocks me.” The worlds our narrator knows are graveyards or gated communities, and he wanders outside them.

But in his broken pieces of a story, the narrator begins to inhabit the world of narrative and the world of his family. He discovers in his father’s study a stack of papers related to the disappearance of a man from the town his father grew up in — news clippings, photographs, maps. The narrator identifies right away what he calls a “symmetry” between his father’s search for this man and his own search, through these papers, for his father. We read clippings of articles from the local paper, terribly written excerpts with “abstruse syntax and ridiculous police jargon,” “superfluous commas that brought to mind a fetid flower,” and frequent lacunae of information created by illegible text — the narrator’s consistent distaste for the writing again underlining his difficult relationship with narrative. Through these fragments, the narrator follows the story as the search becomes frantic, and the townspeople begin to rally around the missing man, who, though a simple janitor who the narrator describes as “some sort of Faulknerian simpleton whose presence had gone unnoticed by everyone except a small circle,” becomes an icon of injustice. The case escalates as the townspeople demand justice: “what emerged was a collective fear, the fear of a recurrence and the fear of losing the almost proverbial tranquility [… ] to put it another way, the inevitable shift occurred from individual victim to collective victim.”

The story of the missing man turns out to be tawdry, sordid and sad, a story in which greed preys on loneliness, a story that lends itself more easily to distaste than it does to the kind of sentimental memorializing with which the town has treated it. But this story, like so much in My Father’s Ghost, isn’t really about itself, but rather another trauma. The missing man’s sister, the narrator finds, had been a friend of his father’s who was disappeared by Argentina’s military dictatorship, her body never found. So for the narrator’s brother, the search for her brother is a search for her, just as following this story, for the narrator, is a search for his father. The search is a recovery, too, of narrative. Early on, as part of one of the lists of facts with no organizing structure, our narrator tells us his parents are journalists: “No psychoanalytic therapy has ever worked for me. My parents are journalists, newspaper journalists. I like ravioli, empanadas and breaded steaks… ” Later, he tells us his father “in fact taught the journalists who in time would be my own teachers.” Slowly, we put these details together as our narrator painfully manages to dig them out for us. Narrative and family have been broken together. Now, finally, comes the attempt to rebuild.

Pron’s book is a deep, complex exploration of coming to terms with a traumatic national and familial history. If it strays, at the end, a little too far into concrete documentation of the narrator’s parents’ resistance organization, well, maybe that can be chalked up to the exuberance of rediscovering language after devastation.