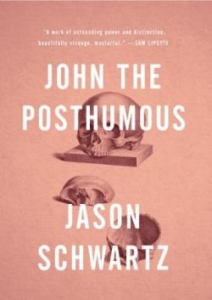 The title of Jason Schwartz’s John the Posthumous refers to the shortest ever reign of a French monarch — John I — a child who lived a mere five days, possibly poisoned by his usurping uncle. But this paltry elaboration on the book’s title will not demystify its content, for, like many of the half-explained half-histories Schwartz half-takes on as subjects, John I is pure MacGuffin.

Schwartz’s second book (the first being A German Picturesque, a collection of short stories) is not at all an experimental rehashing of the reign of this king, nor does its buried narrative have much to do directly with most of the hideous acts of violence — or birds, or bed types, or biblical references, or houses in Colonial Pennsylvania — that the book rattles off in lieu of story. Rather, this prose-poetry-ish collage of antediluvian gruesomeness and domesticity creates a feeling akin to diving into a Joseph Cornell assemblage — or perhaps a mismanaged Restoration Hardware. Just 30 pages in, you might find yourself thinking, or asking a significant other, “Will one more distressed fetus hide actually make the pages pop? Does this patinated bedpost clash with these pickled chicken’s throats?” The author certainly won’t answer these questions for you — he’ll only address them by continuing his inundation of gore and household objects — charred adulteresses juxtaposed against 1800’s mantelpieces, and the like. But if you’re at all like me, you will finish John and appreciate its power and boldness — its refusal to settle on being merely haunting — its insistence on seeming, itself, a haunted object.

If this is a tale of anything, it’s one of cuckoldry (John the Posthumous’s three sections are “Hornbook,” “Housepost, Male Figure” and “Adulterium”), and ensuing matricide/infanticide — every so often, the narrator will speak in the first person, and through these rare moments, we can infer, with the help of a not-too-generous back-cover description, that he has been cheated on, then, it seems, killed his wife and children, and afterwards, perhaps, become an unreliable historian and written this . . . thing. Despite the titular specificity of the sections, the division of the book into its three parts seems a mere formality — the voice and rhythm are adamantly static, providing little in the way of revelation from chapter to chapter. Just as every description reads as an erroneous passage in a madman’s encyclopedia, the differentiation between chapters reads as another decoy from a deeply hidden story, another false and distorted factoid.

In John, images ceaselessly interrupt the rare fragments of narrative. Then these images, themselves, are hijacked by other images before they can ever become complete:

The orphan swallows a small bird, a finch or a sparrow, even a parakeet, wings clipped, eyes excised—at least as the narrative survives in the upland boroughs and in several Eastern towns. (Bloodbirds, so-called, are said to produce a rueful sound.) A bloody bone is thunder, in one version, and timber and chimney smoke, in another—or a pile of sticks near a river, just before the war. (The treetops seem to shriek.) A rag doll gives way to a stump doll—the face stained red, for the frightened child, or blue, for the dying child—which gives way, in turn, to a toy horse, describing a faltering voice. The rattlebox contains a hook and a blade, and is buried in the margin of the yard.

Through the abstract beauty, blood and rot of this book, the first person surfaces from the heaps of inanimate objects, reminding us that, despite Schwartz’s anonymizing lists of “household accidents,” beds through the ages, and colonial Pennsylvanian architecture, there’s one specific man with one specific (murdered) family at the heart of this book. These moments keep the reader going, and lead us to think we’re wandering toward epiphany (we probably aren’t):

In our house: there are ten windows on the ground floor.

Through some of the seeming randomness, there are a few deliberately recurring images, one, in its quietness and simplicity, more disturbing than any of the violent visions with which it’s juxtaposed: a man and wife on different levels of a stairwell. At various points in the book, their positions on the stairwell shift.  The potentiality of this image — given what we assume becomes of man and wife — is tremendously terrifying.

Then, of course, there are the “are-you-joking?” moments (and often, it turns out, Schwartz is kind of joking), as in the three-page section where the narrator abruptly begins describing his recipe for tripe.

Just as I would never expect to hear 4’33” following Ellie Goulding at a club, I wouldn’t recommend reading John the Posthumous following a good day at the beach. I’m sure there is a time and place for this horrifying little Madlib Jason Schwartz has written — I just can’t figure out what it is.  I’m not being hyperbolic in saying that the reason this very review is a week late to be filed is that I could not find an appropriate place to read this book, lest it become tainted by its deft and oh-so-pretty insidiousness.