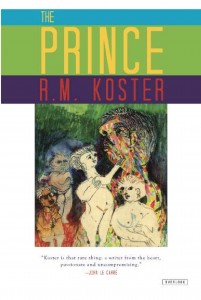 But then — and you can trust me on this one, gentle skeptic readers — it gets hilarious. Revenge, and the aesthetic of excess that supports it, drive the plot, and provide a locus for the book’s satire of masculine aggression, ambition and political commitment. Our narrator, Kiki Sancudo, the prince to whom the title refers, is the recently paraplegic second son of a powerful political family in a fictional Central American republic. When the narrative begins, Kiki’s father is running for his fourth (non-consecutive) term as President. Kiki, as Koster explains in the preface, is a hybrid of Bobby Kennedy and Tito Arias. Like Arias, Kiki is paralyzed by a gunshot; an Italian movie star for a wife stands in for Margot Fonteyn. He’s a sex-driven playboy from an elite family who stumbles into political ambitions as he stumbles into any number of wild adventures — drug running, gun running, brothel running, going to Yale, an anti-U.S. riot, an accidental coup d’etat.

Tinieblas seems to be largely modeled on Panama, where Koster has spent much of his life. Tinieblas is Spanish, very literary, for darkness or shadows — the book’s epigraph is a Spanish translation of these lines from Genesis: “And the earth was without form, and void; and darkness was on the face of the deep.” Naming is one of the book’s many artisanal touches of hilarity, revealed only by crossing the language barrier: holding places on the long list of presidents of the republic from 1821 to 1966, listed at the beginning, are men with surnames like Mocoso (snotty/full of mucous), Mosca (fly — the insect), Piojo (louse), Chinche (bedbug), Gusano (worm), Tirador (roughly, shooter or marksman), Aguado (watery, sometimes with the connotation of lifeless, limp), Ladilla (crab — the pubes kind), Canino (canine), Cebolla (onion). The list sets up the quality of the satire, tells you which Latin America you’re going to see here — Tinieblas is the bloody, shit-smeared version, the foul circus crawling with vermin, the geography onto which is mapped the most aggressive elements of the masculine psyche. There are all kinds of potential here for misreading, offense, insensitivity to the real traumas of corruption and misrule, and certainly that potential resides heavily in the presumably largely North American audience. But the writing is tender, careful and smart — Koster’s attention to tone extends even to some awkward English dialogue that mirrors natural-sounding Spanish — and the satire hits its mark.

While stewing in his revenge fantasy, Kiki thinks through his life and his country’s history. The book is comprised mostly of the flashbacks; after initially seeming aimless, these soon begin to take shape in a recognizably narrative way, building up to the shooting, matching the past with the present narrative. Kiki walks us through his father’s early life and first presidencies, as well as the administrations of many a past president. In these stories, Koster’s touch for the absurd and ear for pith come out: “Olmedo Avispa received the presidential sash at eleven o’clock in the morning on the first of June and choked to death that same evening on a piece of filet mignon from his inaugural banquet.” The country goes from one corrupt maniac to another, each with his own flair — Kiki’s father’s is a strange mix of lycanthropy and astrology. His mistress also has a tail and pointed teeth (there’s the occasional element of magic here, periodic and bizarre enough to be gratifying, not gratuitous).

Particularly enjoyable is Kiki’s casual skewering of his Northern neighbors. This is the era of the Alliance for Progress; Tinieblas has the requisite section of land rented out to the yankee military, here called the Reservation. Kiki describes the Reservation Club building as “a fine example of Early Gringo Imperialist architecture, whose swaybacked roof and sagging veranda were said to symbolize Uncle Sam straining beneath the White Man’s Burden.” At one point during his father Alejo’s second term, Kiki finds himself in jail for having screwed the presidential mistress — but unlike our friend Oedipus, with great intentionality — where he observes: “A dozen or so communists rotted placidly, three to a cell, to ease the sleep of the American Ambassador and keep up Alejo’s credit with Washington.” It’s the nonchalance that dials in these barbs. Later, he travels to New England to pursue, nominally, an education. While there, he starts a brothel to service the local elite private schools with a son of one of the region’s finest families; the latter inducts him into the Protestant work ethic, “saying that no one exploited workers any more since it was simpler to corrupt them.” In Gringolandia, Kiki waxes corpulent, so much so that IRS agents fail to recognize and therefore fail to arrest him for tax evasion. Only another bracing stay in one of his home country’s jails restores him to his accustomed physical prowess.

Koster’s evocation of virulent masculinity is extremely well pitched. Kiki is the kind of man’s man for whom the homoerotic never threatens his gender identity, but who, having lost his ability to pleasure women (and, to be fair, his ability to wipe his own ass and to lift food to his own lips) thinks of himself as dead. He refers to the event of his paralysis as “my assassination.”

Several unsettling prison scenes, which I will not quote, crystallize the striking intersection of lust, shame, empathy and raw violence. Bountiful are the scenes in which Kiki picks up and then discards women — in one episode of his New England idyll, Kiki recalls, “a beautiful girl, the daughter of a millionaire, fell in love with me, inevitably as the sun comes up or autumn trees turn gold. She fell into my hand before I reached for her, and I enjoyed her as I enjoyed all other lovely things which had obviously been created for my pleasure.” On top of this, even, Kiki’s domestic situation from which he remembers earlier escapades like this one is that of a happy love triangle. Both wife and mistress dote on him in his infirmity. The few uncomfortable sentimental scenes, conversations with his lady companions that sound like they come straight out of a Humphrey Bogart movie, only add to the deliberate excess of machismo.

It’s unclear at what point you start to feel the depth behind Koster’s acrobatic balance of elegant narration, disgusting violence and acerbic satire. It’s this subtlety that takes the book beyond caricature and into complexity.