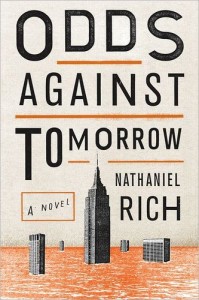 The end has been nigh for some time now. Between Y2k, 2012, and every other rapture being trumpeted from some soapbox or other, it seems like doom is always lurking. But those scenarios often amount to little more than eschatological bogeymen. They have no precedent or context, so situating destruction of that magnitude into a mental framework is nearly impossible. The Ends that we truly fear, we fear because they’re put into terms we understand.

Fear is a manifold thing: it’s primal, but material. It’s individual, but communal. At the heart of Nathaniel Rich’s Odds Against Tomorrow is the assumption that our fear binds us to others. Fear is the point of entry for human interaction for Mitchell Zukor (like “sucker”), the withdrawn UChicago alum who occasionally wears a hand-screened shirt with Leonardo Fibbonacci’s face on it. We first see him as a solitary, hypochondriac number cruncher, but he comes into his own after a horrific earthquake in Seattle in the not-too-distant future (read: our times). “For the first time in his life Mitchell hadn’t been alone with his fear. On that Tuesday morning, everyone was Mitchell Zukor. Everyone obsessed over Richter magnitudes and fatality tolls and worst-case scenarios.” The earthquake was a convenient nexus for everyone’s collective fear, the occasion for a preternatural dread to come to light. For an introvert like Mitchell it’s intoxicating, never mind that event or emotion-based communities like these can only offer a limited amount of kinship.

Mitchell is preternaturally fearful, but without being skittish. His fear is more akin to dread: that nothing is wrong somehow announces that we are on the precipice of something horrible. It’s an instinct he manages to sanitize through number-crunching: calculating worst-case scenarios and their costs. Somehow, it makes these cataclysms seem more unreal, reduced to a series of complicated metrics. It’s a compulsion he puts to use during the working week, when he works as a fear monger for a corporation called FutureWorld. FutureWorld acts officially as a consultant for protecting corporate assets from natural disasters, but unofficially they’re a hired scapegoat. When Acts of God occur, corporations can say that they were advised by FutureWorld, and that FutureWorld’s advice was insufficient. Headed by the dubiously named Alec Charnoble, FutureWorld represents corporations who find themselves defendants in class action suits brought on by the fallout of disasters like Seattle. There’s an indictment implicit here, though it is a heavy-handed one: that corporations (once writ large as Wall Street, now not so much) are only interested in capital, so to protect their asse(t)s they need only don a façade of concern. That’s the primary locus of the FutureWorld folly: they are robbing the amoral, and the amoral are complicit.

Charnoble and Mitchell’s snake oil sales pitches make for some of the most entertaining parts of Odds. Charnoble sees himself as an agent of panic, deadpanning to Mitchell that “in this line of work, it’s essential to frighten clients.” And Mitchell, the morbid statistician, has a virtuosic gift for frightening them. At Charoble’s behest, the FutureWorld office is slightly hot and cramped. The hypothetical disasters Mitchell spins to his clients range from a Chinese-instigated nuclear war, to rivers of blood flooding the streets of New York. It’s a potent combination: between Mitchell’s ingenuity for the macabre and Charnoble’s penchant for sowing discomfort FutureWorld is able to amass a client base of powerful, scared corporations. The duo is only strengthened when Jane joins as a third banana, with a seductive personal style that makes FutureWorld’s empty promise seem all the more enticing. Rich is merciless as he lets Charnoble’s giddy profiteering and Mitchell’s Technicolor apocalypses run wild. The proposed FutureWorld slogans follow suit (some favorites included: “FutureWorld: hope springs infernal,” and “FutureWorld: you made your bed, now die in it.”) But like Don DeLillo, he manages these grotesque scenes without pandering or becoming self-consciously schlocky.

As fear takes on an increasingly central role in Mitchell’s life, living without fear becomes a seemingly untenable prospect. But it is possible, as he learns from his snail-mail correspondence with Elsa Brunner, a former UChicago peer who appears to live fearlessly. Elsa lives with Brugada syndrome, a genetic anomaly where the person afflicted is at an abnormally high risk of going into sudden cardiac arrest. After a Brugada episode while watching news footage of Seattle, she drops out of college to till an overgrown summer camp in the Northeast with her boyfriend. Rich treats her with a degree of caprice — he stops just short of mentioning dreadlocks and patchouli — but seems to concede that her approach to impending doom is a healthy one: if the end comes, no amount of preparation will save you. Brugada syndrome is fickle and volatile: it can stop a person’s heart without any warning. Where Mitchell mires himself in fear, Elsa chooses to live fully in defiance of the prospect of sudden death. Rather than living in fear, it’s imperative to live period.

At first glance, there’s something innately Romantic about Odds. Nature will run its course, and it laughs at our attempts at taming it. When New York is wracked first by a drought, then a flood, FutureWorld can’t offer them any sort of respite. Both disasters bring the city to its knees, and FutureWorld serves only as a reminder that predicting the worst isn’t the same as preventing it. Elsa’s pastoralism is also a farce: the garden she builds to divert herself from the prospect of sudden death ultimately becomes the staging ground for an alarming collective regression in the wake of the NY disaster.

Thankfully, Rich’s interest in this kind of futility is only a part of Odds’ project. He seems more interested in the feeling of liberation from being so close to something so tempestuous. Mitchell is right that we should rationally be afraid of natural disasters, but nature doesn’t obey the laws of rationality. The best we can do is protect ourselves, and actually diminish our risk. If anything, the kind of worry that Mitchell engages in on a daily basis — the kind that ultimately grants him mythic status in the post-flood Eastern Seaboard — is wholly irrational. The same goes for war, catastrophe, violence, or pandemic breaking out at any time: there is a quantifiable risk for these things happening, but their occurrences often obey their own perverse internal logic. Palliatives like FutureWorld, or Mitchell’s number-crunching, are often misdirected attempts to assuage fear. If these things actively duck rationality, then our attempts at rationalizing them are pointless.

It’s to his credit that Rich skews neither too morbid, nor too touchy-feely. He’s frank without being dogmatic, and glib without being smarmy. In fear he’s chosen a knotty subject to study, one where the easiest answers are often the most reductive, but he addresses it with poise and the kind of gallows-humor that would make Don DeLillo, Joseph Heller and Gary Shteyngart proud. It would be easy to simply say either “be afraid” or “don’t,” but Odds Against Tomorrow warns against taking this kind of path of least resistance. Fear is as natural a feeling as warmth, or lust, or hunger, so it deserves to be managed as honestly and healthfully. If our community is predicated only on the assuagement of fear, when the worst happens we’ll be just as prone, and additionally motivated by panic. And then the real nightmare will begin.