I Dreamed a Dream, Goddamnit 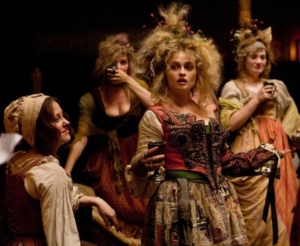 The impending cinematic release of Les Miserables heralds, to many, the apex of the Oscar-baiting season. Any film whose ad campaign relies on the steady drumbeat of its thematic checklist — “Fight. Dream. Hope. Love” — hopes that, with each emotionally delivered ballad, the viewer will go through all the motions of imaginative empathy. We are meant to cheer, cry, clasp hands, and swoon…the best of musical theater does this well. Especially when seen live, as I first saw Les Mis at the impressionable age of 11 years old, the spectacle of hearing real cannons, seeing a real barricade, all spread out in front of my eyes, swept me away. Almost 20 years later, I retain a Pavlovian response to the show, squealing uncontrollably every time I watched the trailer, Anne Hathaway’s plaintive warble moving me to tears each time.

Yet because the genre of musical theatre carries with it so much overt pathos, it has been falsely labeled as schlock, as treacle entertainment, as melodrama, and worst of all, as schmaltz. To be a lover of musical theatre is to be without a critical leg to stand on—a friend once told me that, upon hearing a boyfriend had stood online for Rent for rush tickets a week before, she immediately ended the relationship. “There’s no way I could date a ‘Rent-head’,” she scoffed. “I just could never take him seriously.”

In theory a critic is supposed to be discerning at all times — carefully selecting their cultural intake piece by piece, constantly refining their repertoire of good entertainment choices so that what they produce, what they speak and write about, consist of nothing but quality content. But much like the chocolate-covered potato chips finding their way to the office pantry, I can’t help but let my health drop in the face of sheer pleasure, especially when it comes to musical theatre. As I watch the early reviews trickle in for Les Mis, it’s amusing to see how begrudging the complements can be. In his review for New York, David Edelstein calls the film a “tasteless bombardment”, but ultimately folks because of a built up “tolerance for those it’s-alive-alive-alive! close-ups.”

What’s frustrating in reviews like this is the suggestion that somehow taste for musicals, like taste for bitter coffee or too-sweet wines, can only be built up with relentless exposure to the form. Like a critical form of Stockholm syndrome, affection for emotions expressed in song is not something anyone would naturally possess. But I hold, even when it’s uncool to do so, that a love of musical theatre indicates a willingness to suspend snark in defense of schmaltz. When you spend more than 75% of your cultural life disdaining the popular in favor of the little-known, you can miss all the wonderful qualities that make the popular works popular. There is an emotional satisfaction to a musical, as much as there is to a series of sexy yet deeply misguided novels, or to a meme-ready song of the summer. And when too many of our cultural critics, brilliant as they often are, will spend weeks upon end flicking off cultural trends simply for the sake of doing so, they don’t look well-cultured anymore-they just look plain crabby.

And so, for at least a few weeks this Christmas season, I refuse to apologize for my lack of cultural discernment. I will read shitty books, watch shitty movies, and refuse to apologize for my non-shitty love of musical theatre. When the opportunity presents itself, I will drag myself down to my local piano bar, where countless dorks like myself will gather around an old upright and guzzle cheap white wine while belting our lungs out. And I will do this all without explanation or apology, if only because this should be the season of our better angels. Or maybe because, after a full calendar year of being on guard with our opinions and emotions, I’ve simply run out of the energy to be discerning, and just wish for everyone to join in our crusade.

Who will be strong and stand with me? Somewhere, beyond the barricade, is there a world you long to see?

After all, it takes less effort to stay silent than to sing along.

Jessica Freeman-Slade has written reviews of literature, film, and music for The Millions, The Rumpus, The Kenyon Review, The Los Angeles Review of Books, Bitch Flicks and Specter Magazine, among others. She works at Random House as a cookbook editor, and lives in Morningside Heights.