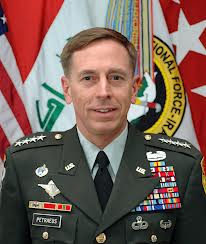 On December 3, a relatively unnoticed bit of news appeared in the “Style” section of the Washington Post. Penned by legendary journalist Bob Woodward, the piece was headlined, “Fox News chief’s failed attempt to enlist Petraeus as presidential candidate.” The gist of it is this: In 2011, while General Petraeus was heading the war in Afghanistan, Roger Ailes — the chairman of Fox News — sent Fox News analyst Kathleen McFarland to ask Petraeus to run for president. Ailes would consider running the campaign, and News Corp. baron Rupert Murdoch, the owner of Fox News, would “bankroll” it.

Now, if Murdoch and Ailes are trying to destroy whatever is left of Fox News’s credibility, then they’re doing a pretty good job, but that’s not really the story here; Fox News behaving like a political operation rather than a journalistic one is hardly news. The most newsworthy part of McFarland’s and Petraeus’s conversation is the future-CIA director’s candid diagnosis of the of American national security state: Woodward writes, “[Petraeus] went on to say, ‘We’re going to be retrenching militarily.’ In contrast, the CIA and the intelligence agencies, ‘I think, are going to be a growth industry,’ Petraeus said.”

Putting aside all of the tired tragic hero pathos and tawdry appeal of the recent sex scandal, General David Petraeus is a fascinating man. He handily manipulated the media, which, in the height of Petraeus-mania, meant adulatory profiles in pretty much every major news outlet. (In my personal favorite, Vanity Fair’s “The Professor of War,” Mark Bowden writes — as best as I can tell without a trace of irony — that “Beyond his four-star rank, he possesses a stature so matchless it deserves its own adjective—call it ‘Petraean,’ perhaps.”)

Now that Petraeus has resigned, the press has started to realize that they might have been a little star-struck. CNN and Newsweek’s Howard Kurtz writes that:

As questions swirled about the CIA’s role in the Benghazi tragedy, he said nothing publicly. A CIA director without the deep media relationships that Petraeus enjoyed would have faced a torrent of stories about why he was missing in action and whether he had bungled the job of diplomatic security. Instead, the press gave Petraeus a pass.

But old habits die hard, and Kurtz can’t quite make it through the article without saying something about Petraeus’s Roman Triumph-worthy performance in Iraq:

This is not to say the plaudits weren’t deserved. Petraeus literally wrote the manual on counterinsurgency, made important gains while leading George W. Bush’s surge in Iraq, and adjusted strategy when President Barack Obama asked him to oversee the war in Afghanistan.

“Adjusted strategy,” if you’re wondering, is Kurtz’s way of saying “counterinsurgency didn’t work in Afghanistan.” Michael Hastings (who accidentally got Petraeus the Afghanistan job by quoting in Rolling Stone Petraeus’s predecessor, General Stanley McChrystal, and his aides being insubordinate) puts it another way: “Petraeus didn’t win in Afghanistan … [r]ather, he proposed and followed a counterinsurgency strategy that was expensive, bloody, and inconclusive.” Hastings sees even less to love about Petraeus’s work in Iraq:

We took the Shiites’ side in a civil war, armed them to the teeth, and suckered the Sunnis into thinking we’d help them out too. It was a brutal enterprise — over 800 Americans died during the surge, while hundreds of thousands of Iraqis lost their lives during a sectarian conflict that Petraeus’ policies fueled.

But regardless of what you think about Petraeus’s work in Iraq (where fatalities dropped during his stint) or his failures in Afghanistan (where, according to Hastings, there were more attacks this summer than in the summer before the surge) the general-turned-spymaster has touched nearly every facet of the new American national security state. As the Washington Post put it:

Petraeus has served as commander in two wars launched by the United States after the Sept. 11, 2001, attacks. If confirmed as the next director of the Central Intelligence Agency, Petraeus would effectively take command of a third — in Pakistan.

The Post is, somewhat surprisingly, talking about the drone war, wherein our military and intelligence services team up to send unmanned planes to kill suspected terrorists and whoever is standing next to them. That, if you’re wondering, is the “growth industry” Petraeus was talking about.

Now the Petraeus’s star is waning and parts of the media aren’t actively begging him to run for President, you’d think that we might be able to have a quick chat about the national security state he represented — the erosion between the military the traditionally civilian-controlled CIA. Alas, we didn’t get that. Instead, as Frank Bruni points out, we got the Daily Beast telling us about Paula Broadwell’s “expressive green eyes,” and the Washington Post telling us about her form-fitting clothes. We heard about her 13 percent body fat, “and like so much else about her — her long-ago coronation as homecoming queen, her six-minute mile — it was presented not merely as a matter of accomplishment, but as something a bit titillating, perhaps a part of the trap she laid.”