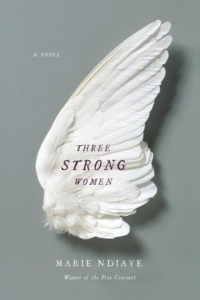 Tr. from French by John Fletcher

Marie NDiaye’s Three Strong Women lingers over the troubling powers that pull lives apart. Herself the daughter of a Senegalese man and a French woman, NDiaye depicts the strained movement of people between France and Senegal. The 2009 recipient of the Prix Goncourt, Three Strong Women drew particular attention in France because NDiaye was the first black woman to be awarded the prestigious literary prize.

Although deeply connected both by place and by metaphor, Three Strong Women consists of three distinct sections whose characters overlap by no more than an almost forgotten cousin. The first part describes the return of a French woman to her father living near Dakar, where he’d once created a vacation village that has since fallen into disrepair. The second story follows a man who met his wife in Senegal and brought her back to live in France. The final story portrays the emigration journey of a young Senegalese woman for whom Europe is no more than a distant, but longed for, word.

Though it is written in the third person, the prose of Three Strong Women rarely transcends the muddled perspectives of each section’s main character. Key information arrives late or not at all, making the story itself sometimes difficult to follow. NDiaye’s composition is intentionally opaque. Sagging under the weight of what they cannot remember, each character repeatedly questions what has passed:

But what had pushed him to let slip those words that ought never to be uttered by a man who passionately desired to be loved as he had always been, that was what he couldn’t recall, as if the terrible phrases (but what were they, exactly?) had exploded inside his head, obliterating everything else.

Paralleling their inability to keep hold of their too-fluid thoughts, the three main characters each manifest some lack of physical control: incontinence, excessive itching, a festering wound. NDiaye’s women are not “strong” due to their ability to overcome their trials or by doing something extraordinary. Rather, their strength comes simply from being. As her life degenerates, the novel’s final character retains her strength of spirit by grasping onto her individuality: “a wild surge of joy would make her exhausted body quiver all over as she recalled suddenly, pretending to have forgotten, that she was Khady Demba: Khady Demba.”

NDiaye’s meandering and languid prose style perfectly suits her plot. In the novel, as well as in the characters’ minds, what has happened before becomes interwoven with forgetfulness and conflicting memories. In its translation to English, translator John Fletcher occasionally loses the subtle momentum that French so easily maintains, falling instead into a mire of clause-ridden, sluggish paragraphs. Yet the novel, which initially evades its reader by never offering enough information for full understanding, becomes vivid with the wrenching conclusion of its final storyline.

At times exhaustingly tangled in the depressed and circular thoughts of its characters, Three Strong Women nevertheless concludes with unanticipated connection and meaning, even as complete understanding and success for its characters remain illusory. NDiaye presents a compelling novel that deserves a second, as well as a first, reading.