You & Me – Padgett Powell 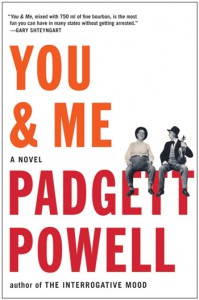 There are two types of people in this world, as far as I can tell: shit-givers, and shit-shooters.[1] Shit-givers are those who care deeply about politics, justice, morality, the environment, cars, flossing; they are sports fans and religious zealots, soldiers and single-mothers, artists, movie stars,  jihadists, members of the Senate and the Illuminati, people who wear bicycle helmets or own a clipboard, farmers, careerists, air traffic controllers, venture capitalists, people who comment on internet fora or construct elaborate jumpsuits to keep them warm as they walk to the liquor store,  those with ambitions to actualize and dignity to defend — in short they are the people who give a shit.

Then there are we others. Us. You and me, the shooters of the shit.

It is not always easy to tell into which camp Padgett Powell falls, nor does it seem especially helpful or germane to speculate on the matter. However You & Me, Powell’s latest novel, makes it abundantly clear that the National Book Award nominee has a profound affinity for shit-shooters. The man may or may not embrace shit-shooting as his own personal lifestyle, but he certainly understands why a body would,[2] and has a keen appreciation for the pleasures and sorrows that shit-shooting has in store for its lifetime devotees.

The novel takes place “somewhere between Bakersfield, California, and Jacksonville, Florida — we think spiritually nearer the former and geographically nearer the latter . . . on a porch in a not upscale neighborhood,” where two unpretentious, unidentified southern “dudes”[3] shoot the shit. For just under two-hundred pages, the two unattributed, virtually indistinguishable voices trade quips, coinages, stories, and rants. I guess they probably die at the end, but that part isn’t so important.

Which isn’t to say that death isn’t a central and recurring theme in their exchanges. Underlying the apparently freewheeling dada of their conversations[4] there is a simple and beautiful progression from gestation to mortal expiry. Attentive, structure-hungry readers may find themselves “becalmed”[5] by the interpretation of You & Me as a kind of grand, sweeping, willfully sloppy fugue, a meditation on human mor(t)ality in which meaning is created ex nihilo by the skillful and subtle repetition of banal elements which weave in and out of memory and forgetting only to crumble into nothing before the obscure and terrible fate that awaits us all. The novel offers quite a lot for shit-givers, that is, if they are willing to invest a bare minimum of imaginative sweat to dig it out.

But as a shit-shooter myself, I found that I was perfectly content to simply be in the company of these “codgers”[6] for as long as they were willing to have me. Powell is a master of wordplay, and it is a delight to see him taking such delight in the practice of his craft. In You & Me, the author has gifted his readership with some of the most exquisite nonsense the English language has ever known. The lackadaisical manner in which the conversations transition from existential lament to poetic reverie to stupid joke is weirdly thrilling. Almost every single line of dialogue is clever, colorful, and strange enough to maintain the reader’s interest despite the novel’s complete unconcern with narrative of any kind. It doesn’t hurt either that when the novel isn’t being hilariously absurd, it occasionally slips into truly beautiful prose.

I would be remiss in my duties if I failed to mention at this point that You & Me is extremely funny.

There is something quite comforting about following the contours of Powell’s imagination through the voices of these two characters — like walking a labyrinth while reciting Zen koans and cradling a bucket of chicken. This experience can be traced back to a stroke of formal genius on Powell’s part. The two geezers speak to each other in a way that is more familiar even than a single person talking to himself. It would be impossible to convey the casual tenor of their words with only one voice; it would be lost in the oppositional relationship between author and audience. The characters’ namelessness maintains the possibility that both voices could spring from a single mind. The rhetorical move of dividing the novel’s action (or lack thereof) between two voices and denying the reader the ability to differentiate between them sets up a triangle that includes the reader as a silent third voice, an equal participant in the novel’s thought-lobby. Just as you lose track of which character is speaking, at a certain point you begin to lose track of the distinction between author, character, and reader. Forgetting which one is “you” and which one “me,” your mind begins to incorporate itself into the novel’s oddball meditations.

You & Me is thus possessed of a “remarkable”[7] ability to convince me that I am not alone in my loneliness and fear. What more do you want? Chalk it up as a win for the shit-shooters.

[2] Because that body is inevitably going to grow old and feeble and die, is the reason.

[5] “I am terribly becalmed by a washing machine. Is everybody?”

[6] “Telling a codger who says quite properly we ain’t doing shit to eat a lard-and-hair sandwich does not in the long term constitute a life.”

[7] “Because if the combination of Ban Lon and walnut and deformity moves you only to remark, as the word remarkable suggests, then you suffer a catastrophic failure of the imagination.”