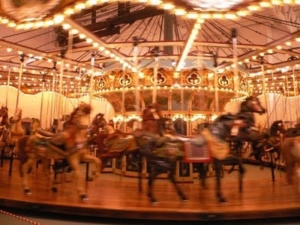 Ray Bradbury died a couple weeks ago, so there aren’t many accolades left to heap on him about his vision and his prose. Both are astonishing, and gave rise to my extensive Bradbury phase between sixth and eighth grades. I loved Farenheit 451, The Illustrated Man and The Martian Chronicles, but those didn’t stick with me like Something Wicked This Way Comes. In particular, one image has haunted me since I was twelve: the carousel playing Frederic Chopin’s Funeral March backwards as the carousel spins backwards and the riders age in reverse, while the ringmaster (Mr. Dark) siphons each rider’s soul.

On the one hand, the Funeral March seems like an obvious choice for the theme music. Reaping souls is explicitly funerary, after all. It’s the same logic that most likely led John Williams to nod to Chopin when composing the Galactic Empire’s theme music,  since Darth Vader and the Emperor were death’s right hand men.

Part of Something’s virtue is that Bradbury lays bare that moribund focus. A “dark carnival” materializes in a thunderstorm a week before Halloween (in autumn, when everything is half dead), and characters have names like “Will Halloway” and “Jim Nightshade.” Bradbury is unapologetic in stating his concern with the dead and the living, living and dying. As Bradbury uses it, the March is a literal harbinger of death; if the carousel playing the March spins forward and the theme finishes a certain amount of times, the rider ages into death. If it goes backwards, then they regress out of existence. But the March hasn’t historically been used as a stand-in for death itself; the Funeral March is for mourning. It was played at Chopin’s funeral as well as JFK’s and Joseph Stalin’s. *

There’s a degree of separation here that Bradbury ignores: mourning is contingent upon death. Mourning allows us to deal with the symbol of death while sidestepping death itself. Converting the act of mourning to something as abstract as a piece of instrumental music serves to further isolate it from death itself.  Bradbury skips a step or two: the March is death. It’s the same kind of dream logic — read: literalism — at work in Lewis Carroll’s Alice books, e.g when the Hare tries to fix the Hatter’s watch by smearing butter on it.

Bradbury is particularly unsentimental when presenting death in Something. Death is a slow process; aging (in real time) is a slow death. His Manichaeanism goes a little further; youth is bliss, as death is a far-off thing. Adulthood is agony, as it’s borne of the awareness of an encroaching death. He shows his hand early, in a conversation between Will Halloway’s father, Charles, and his bartender:

“I don’t need it,” said Halloway. “But someone inside me does.”

The boy I once was, thought Halloway, who runs like leaves down the sidewalk autumn nights.”

As it was for Carroll in Alice, adulthood is a kind of lapse. You don’t lose your sense of wonder as much as you forget it. But in Something, it’s something you can get back. Without giving too much away to potential readers, that’s all I can say. It’s a kind of zest that transcends life or death, and keeps ones malaise at bay.

When I saw Bradbury speak in 2000, he claimed to be a ten-month baby. He said that extra gestation time gave him the ability to remember his own birth. He spoke about swimming towards a light into the world — it sounded a lot like the way people who have come back from the brink describe death.

Having seen Bradbury speak, Something seems less dogmatic. Bradbury spoke at length about his youth, but he didn’t seem bitter. Totally the opposite: he lit up when he spoke, so much so that I didn’t realize he was as old as he was until I asked him to sign my copy of Farenheit 451 — he seemed ageless. If Something indeed does come on strong, it’s because it’s what Bradbury truly believed. That life is a march towards the grave only if we lose our sense of wonder, and wonder is easy to come by if you’re looking.

*The number of funeral processions to feature the March is too large to even guess, both in the US and the Soviet Union. In his article “Chopin at the Funeral” in the Journal for the American Musicological Society, Leonard Kramer writes of the Soviet Union that: “Arrangements of the march were used so regularly used to bury state officials […] that radio broadcasts of the original music had to be banned, lest people think someone important had died.”