On Not Doing Rome 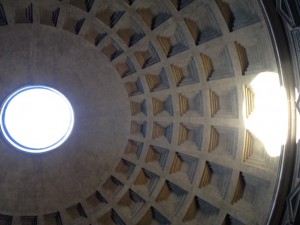 Forgive me, please, for demanding a usage favor while I sit in the shade of a tree and flower-infested courtyard in one of the quieter neighborhoods of Rome, where I am living for the next several weeks. (It’s 95 degrees, to be fair.) The favor, related to traveling, is simple: do not use the verb “to do” when you mean “to visit” or “to see.”

I have eliminated this usage from my speech as part of my own efforts to seem less of a dolt while traveling, and I will be so bold as to prescribe the excision to others. Examples of this extremely common “to do” offense include:

“I did Bangkok” for “I visited Bangkok,”

“Such use of the verb “to do,” smacks of just the sort of arrogance from which many tourists wish to (and would do well to) escape. To suggest that a city or site can be “done,” like dishes, the laundry, or homework, reduces said city to the limits of the do-er’s consciousness or experience. And to suggest that reality ends with your experience is to be narrow-minded, or ignorant.

Like most American tourists — perhaps like all tourists — I am painfully self-conscious of my tremendous cultural ignorance. Like most American tourists in Italy, I speak barely a word of Italian (I am here to study Latin, as it happens), and like many American tourists I want to place the greatest possible distance (both physical and metaphysical) between me and that “other” type of American tourist. You know — the obese whiner who sports a fanny pack and sneakers and thinks that speaking English more loudly will jolt an Italian into understanding. (This is hardly necessary, actually; Italians often switch to English as soon as they register a foreign accent.) Perhaps by avoiding “doing” places, I feel that I’m somehow expressing greater cultural awareness than my bloated counterpart.
The use of “to do” as a travel verb is neither particularly new nor particularly American. In Virginia Woolf’s 1922 novel Jacob’s Room, the naïve and privileged Jacob imagines “after doing Greece he was going to knock off Rome,” with the absurdity of the second verb underscoring the inappropriateness of the first. And in E. M. Forster’s 1908 novel A Room with a View, the well-meaning if brusque Mr. Emerson asks protagonist and fellow Florence tourist Lucy: “Are you doing the church? Are you through with the church?” Forster is, of course, too clever to sacrifice Mr. Emerson in order to elevate Miss Honeychurch and her more rarefied class of travelers. He also gets on the case of those who, like me, decry the use of “to do” in relation to traveling, though for quite a different reason. The outrageously pedantic Mr. Eager, a British resident of Florence, riffs:

“‘…we residents sometimes pity you poor tourists not a little — handed about like a parcel of goods from Venice to Florence, from Florence to Rome, living herded together in pensions or hotels, quite unconscious of anything that is outside Baedeker*, their one anxiety to get ‘done’ or ‘through’ and go on somewhere else. The result is, they mix up towns, rivers, palaces in one inextricable whirl.’”

Readers who have the benefit of the narrator’s excellent taste can chuckle over what we know is Mr. Eager’s stuffy arrogance: he seems to think the “doing” and “getting through” are false merely in the sense that the average tourist simply doesn’t know enough, or know the right information about a given location to be “done” with it. Whereas Mr. Eager, who would never dream of mixing up the Arno and the Tiber river, might claim to have “completed” his Italian education.

But places, not being particularly real, not being knowable, can hardly be “done” or “completed.” I would not claim to have “done” even the city where I grew up, or the city where I went to college, or the cities that have hosted me since then. Certainly I know many things about those cities, their quirks and niches and best Thai restaurants, but I don’t know far more and, unless I were omniscient, omnipresent, and omnitemporal, I could hardly claim to have “done” these cities in the done-the-dishes sense. How much less, then, could I claim to “do” a city simply by spending a few days within its borders and imposing my physical presence on its most famous monuments!

Of all the egregious errors English-speaking tourists inevitably make when we venture forth from our respective nations — ordering cappuccino after 11am! Wearing shorts in the city! Tripping on cobblestones! — excising “to do” from travel vocabulary must be one of the easiest to amend. Much as it pains me to say it, only trifling material differences and a splash of snobbery separate me from the flabby fanny pack wearer. Her errors are my errors; her joys in traveling are my joys; her luck in having the resources to travel is my luck. It would serve us both well to remember that a place is not a chore to be “done,” and that our individual experience of a place does not constitute that place’s essence — indeed, to remember that a place doesn’t have a unified essence. It only impresses us with memorable examples of its patchwork whole.

*Baedeker was a ubiquitous travel guide brand — the Edwardian version of Lonely Planet.