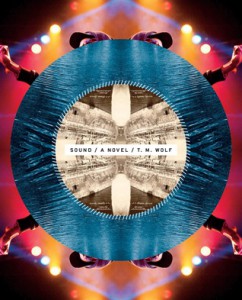 “So full in the air, ear, mind. So flat in hand,” writes T. M. Wolf, opening Sound with an invocation of a vinyl LP. For its iconic quality, the LP is a convenient framing device for Sound. As records became ubiquitous in everyday life, they half-superseded the live performances they immortalized, dislocating music from its original time and space. Suddenly, you could listen to the music you chose, in your home, when you chose to listen, beginning and ending a side as you saw fit. With hip hop, records moved from being convenient to being useful. The sounds of others could now be used to create something original. Unlike mp3s, LPs never rendered sound intangible. Inside the record grooves are sound waves, and the stylus essentially reads them to us, moving closer to the center over time.

The image of the LP frames the entire novel. Structurally, the book is divided, like a record, into an A-side and a B-side, The novel’s graphic form also resembles aspects of an LP: the dialogue takes place on lines drawn across each page, like concentric record grooves; volume and emphasis are conveniently shown by the text’s varying size; and each speaker is consigned to a different “track.” This attention to sound is particularly evident in Wolf’s remarkable poise in crafting dialogue: from narrator/protagonist Cincy, to boat mechanic Tone, to Mike the perpetually stoned teenager who works at the yard, each character has such a distinctive voice that keeping track of who’s speaking is as easy as it would be if we could actually hear them.

Cloying as it is, Cincy’s memory is literally a record of his past. Returning home, Cincy replays the record of his past along the grooves of Jersey Shore’s boardwalks. Every place he goes has a backlog of memories waiting for him to read aloud, lying in wait like the sounds on wax. As he sands down his childhood patio, we learn about his childhood through the abrasions he left behind. On the boardwalk we learn about his adolescence, of old friends gone derelict. Even as he works at the boatyard, we learn about summers spent working there as a kid, time spent on his family’s catamaran. Cincy’s memories often have no clean beginning, in the same way that cueing up a song on a record it’s easy to mistakenly drop the needle just ahead of the down-beat.

That Cincy’s memories have such a material basis explains why he dropped out of his Philosophy PhD program to return home to the Shore. Cincy seems chiefly moved by place, by the material. Thought seemed farther removed, consigned to its own abstract realm. He’s most interested in making sense of his past, and doing so on his terms.

While Cincy’s project is to feel out the texture of his own past and so reclaim it, his best friend, Tom, devotes himself to aurally counterfeiting a more communal past. Tom means to cover all the records in the juke box at a local bar — each record its own perfect “Shore-Rock” song — and to mock-up each one so meticulously that listeners won’t be able to tell the difference between his version and the original. “If you nail the cover right, people shouldn’t be able to tell the difference,” he deadpans at one point. (Their friend, Frisco, astutely calls Tom’s project “the sonic equivalent of wallpaper.”) He makes his backing band dress like whoever’s cover they’re recording, simulate any physical handicaps the original bands might have had (including sticking tissues in his mouth so that he’s forced to enunciate like the singer he’s mimicking).

Cincy’s desire to hit replay and reclaim his past by returning to the places that hold his memories flies in the face of the counterfeiting operation of Cincy’s Shore, and in tourist traps more generally. In these places, your experience is carefully controlled, since your experience is their most salable product. But their attempts to forge an ersatz Unique Experience of place out of nostalgia amounts to placing a stock photograph where a memory should be. However, it’s couched into terms of originality, special memories, etc., which makes it all the more duplicitous. So it goes for the boardwalk in Sound (not having been to the Jersey Shore, I can’t speak to the real thing). Occasionally, Wolf’s overemphasis of the novel’s experimental form has a similar effect of hedging the reader in. Helpful as it is to graphically emphasize certain details — the volume of sounds, different fonts for different speakers — it can be intrusive and diverting.

At the heart of the ideas of counterfeiting, tourism, and of the LP is the idea of repetition. It’s a hallmark of all kinds of popular music — including Wolf and Cincy’s beloved hip hop — but Cincy takes it to an extreme in mentally replaying his past to the point of obsessing. It’s a tendency at its most insidious with Vera, the girl with whom he’s more or less romantically involved. Cincy all but exhausts every instance they meet up, parsing apart her every word trying to figure out What She Means. With every remembrance, Vera becomes less of a person to Cincy and more of a thought. Though it becomes decreasingly clear why she’s on his mind, that’s where she stays.

In spite of his obsessive nature, it’s hard to fault Cincy for giving due diligence to his memories. While he overindulges, the sounds of his memories never cloud his instincts. Those sounds are his instincts. There’s a bitter quality to his replaying of memories of Vera, just as there’s a bitter quality to their relationship. The more he replays his memories of her, the more salient that quality becomes. The same goes for Cincy’s treatment of the police throughout Sound. The cops lurk around the boatyard, and circle around Cincy and his coworkers. At one point one actually accosts him, at another they ransack the boatyard. He constantly flashes back to both, as tries to make sense of something that seems amiss. Eventually he learns that something is.

Repetition is a double-edged sword: on the one hand, it’s easy to get caught in cycles, spinning around the same point you’ve spun your whole life. On the other, the only mistakes characters can learn from are ones that they’ve made. So it becomes necessary to revisit them as cautionary tales.

In Sound, leaving one’s baggage behind seems beside the point. Personal progress instead means figuring out how to manage it, and reassessing over and over again. The same goes for sampling culture, specifically hip hop. The sounds of the present are merely rearrangements of the sounds of the past. Cincy chalks his admiration of hip hop up to artists’ ability to be “historical simultaneously, the true present, flipping the old into something new, or something old-new.” The first artist Wolf acknowledges at the end of the novel is J Dilla, who Cincy may as well have name-dropped in that statement for Dilla’s uncanny knack for creating new songs out of old ones.

Musicians who write commercial music aren’t known for writing with shades of grey. There are exceptions, but for the most part pop songwriters deal with longing in the broadest of strokes so as to appeal to the broadest audience. In that sense, popular music has some catching up to do with Wolf for his multifaceted ambivalence towards reckoning with one’s past. Nostalgia is a fetish; in Sound it’s a compulsion, a habit to be tamed. Whether or not it can be isn’t clear.