From the Umberplatzen – Susan Tepper 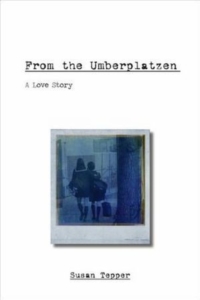 At the end of every chapter of Susan Tepper’s new novella From the Umberplatzen, the main character gets something small in the mail: a ceramic frog on a key chain, a jar of peanut butter, a “little star made of kite silk,: etc. Each small thing tokens a moment from her brief romance with a German man while traveling abroad. The chapters themselves tell the stories of those moments, placing the tokens in context, as the narrator hints at what caused her to run away to Europe in the first place.

The story is told in the past tense, in both senses of “tense:” the narrator remembers her German fling with that complex and worn resignation unique to failed love. Thus, every token has an odor of garbage; that is, something used up, something to throw away, something to dispose of. The memories these objects recall are pleasant but somehow disgusting as the narrator, at the time of the telling, is alone, kept company only by her freedom and dissatisfaction.

So she tosses the tokens away, holding them out to us as she holds them away from herself, sighing at them and pushing them aside like useless gifts or cheap souvenirs whose significance have expired.

This sense of disposal isn’t just an aura glowing around objects in the story. A throw-away glow haunts the form of the book, too. It’s a novel told in Tepper’s preferred style: flash fiction. Every page of this slim novel composes an entire chapter, each with a beginning, middle, end, and room at the bottom to announce what’s come in the mail.

There are nearly 800 journals that publish this kind of content in English (new ones appear online every week), and Tepper’s incisive little book raises a tension inhering in the flash fiction form: Are these stories — under 1,000 words at most — anything more than throw-away tokens of being? Are they just disposable remnants of expired thought, feeling, and image, or is there something more to them?

The cover of Tepper’s novella is telling: it has a polaroid photograph of a couple holding hands against a blank white background. The name “flash fiction” evokes something photographic. The flash going off and illuminating a scene — a vignette, as Faulkner would say — for just long enough to see it, capture it, and expose it; at least, the flash makes a scene exposable, ready-to-develop; makes something frameable to look at again and revisit. “Flash” also connotes the amount of time this all takes: here and gone, fast, as in flash crash or Flash Gordon or The Flash. A burst; evanescent. Ephemeral. A bulb’s pop.

So if these thousand-word stories feel shallow (in the way that Clay Shirky uses that word), you might be onto something. They’re just pictures. Pretty images standing alone, finite in time and space. But if you get the sense that, though quick, there’s something there to see, something exposed, a “point that wounds” to quote Barthes’ Camera Obscura, then you’re right too. Case in point, I read From the Umberplatzen in a day. But it left me with something more than just a series of disposable images. It gave me frame-worthy moments.

Correction: An earlier version of this review incorrectly listed some of the objects the main character receives in the mail. The review listed a rabbit’s foot and kite tail instead of a ceramic frog key chain and a “little star made of kite silk.” We regret the error.