Arrrgh, Achtung! The State of Piracy in Germany 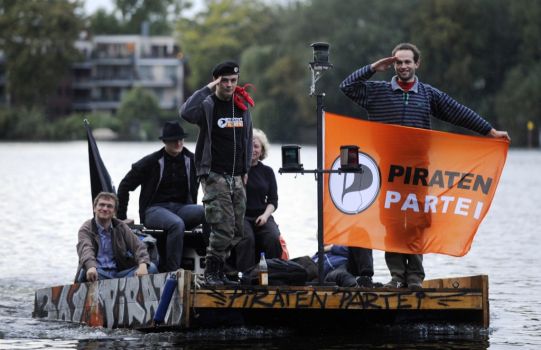 Last September, the Pirate Party shocked Germany (and themselves) by walking away with 8.9% of the vote in Berlin’s regional elections, which gave them two seats in the city-state’s house of representatives. In March, they proved their one-issue platform (decriminalizing internet piracy) had surprising staying power, when they won seats in the house of representatives in the more provincial (and tiny) German state of Saarland. A recent poll shows that nationwide support for the party is currently at 13%, making it the third most popular political party in Germany.

When I was living in Berlin in 2009, the Pirate Party was all over the news for having won a seat in the Swedish delegation of the European Parliament that June. (The Pirate Party is multinational.) That same summer, I saw Pirate Party members take to the river Spree in makeshift pirate ships and post intriguing notices for Pirate Party meetings on what seemed like all available surfaces. Almost a year since the collapse of the housing market and two years before Occupy Wall Street was a phrase on anyone’s lips, the rising legitimacy of the Pirate Party in 2009 felt something like a much-needed “fuck you” to the neoliberal political establishment.

Interestingly, as Occupy Wall Street never quite caught on in Germany, so the Pirate Party has (so far) failed to truly catch on in the U.S. (While the American Pirate Party has existed since 2006, as of 2011 it only had 3,000 members.) It’s also interesting to note that the countries where the Pirate Party has the strongest hold (Sweden and Germany) are countries that managed to escape the recent economic turmoil relatively unscathed. In both countries, it seems that the disaffected youth have seen in the Pirate Party’s antics a movement more suitable to expressing their unique dissatisfaction with neoliberalism’s status quo. And while both Occupy Wall Street and the Pirate Party have been criticized for failing to articulate a broad political platform, Occupy has, so far, not sought solutions through established political processes. The Pirate Party, in contrast, has only existed as a legitimate political party working within the strictures of legitimate political systems. And while it started out as a joke — internet denizens making the “pirate” insult their own, and mocking their opponents in the process — isn’t the point at which they hold real political authority the time to start taking things seriously? Not to some Pirates, it seems.

This past December, the Pirate Party in Berlin recently voted on and passed a resolution allowing a Ponypause (“Pony Time”), in which the assembly at any of the party’s caucuses must stop deliberations during a meeting and watch an episode of My Little Pony: Friendship is Magic whenever any party member calls for it. It’s an example of an important aspect of the party’s M.O., which is to lampoon the real world political process via the insertion of off-line references to internet in-jokes and memes. Another example is the Swedish Pirate Party’s creation of the “Missionary Church of Kopimism,” a religion whose central commandment is to download files and share them. They’ve adopted ctrl+V and ctrl+C as holy symbols. (The religion was created in response to a copyright lawyer’s statement calling the party “a cult.”)

The Pirate Party revels in inserting the anarchic, meme-based sensibility of internet culture into the dry and stuffy world of government process — devaluing it even as the party relies on it — but in the name of something akin to internet trolling in the real world, members often take license to say and do whatever they want, with disastrous results.

According to the Pirate Party’s own youth segment, who recently wrote an open letter calling for internal investigation into instances of sexism and racism on the part of party members, bigotry abounds within the party. One Pirate Party member called a women “too pretty” to take seriously; another member said another woman “should just be fucked real hard, and maybe then she’ll relax;” still another declared that women didn’t deserve to take part in the party’s Stammtische (informal meetings). And that’s just the sexism! One woman drew fire for her statement that she wouldn’t let “foreigners” take care of her, were she in a nursing home. “Ausländerkritisch” (literally, “critical of foreigners”) was also treated as an acceptable political position by Pirate Party members on Twitter.

A party speaker recently dismissed critics  by claiming that in every political party there’s “a percentage of idiots,” and we should ignore the racist and sexist ones in the Pirate Party.

A few weeks ago, a segment of the Bavarian Pirate Party claiming to be “against right-wing extremism” published a strangely defensive tract regarding claims of racism made against Pirate Party members for (racist) things they had said on Twitter. At one point, the writer argues, “We can’t read anyone’s mind. And yet we judge them. From 140 characters. Is that not also a form of racism? Not against “races,” but against attitudes and feelings.”

The existence of such a garbled and ultimately offensive piece of logic on a party blog would, I think, spur resistance to the party speaker’s request that Germans simply dismiss such behavior as that of a small minority. But it seems that whatever my misgivings, an ever-growing number of German voters would rather ignore instances of overt bigotry in favor of the novelty of seeing a Brony take office.