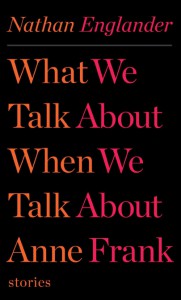 Two couples gather in a suburban home in the title story that opens Nathan Englander’s new collection, What We Talk About When We Talk About Anne Frank. The hosts are American Jews, the guests ultra-Orthodox visiting from Jerusalem. When the visiting husband, Yerucham, begins a story about his father, a Holocaust survivor, the narrator’s wife, Deb, listens rapt:

And I can see in her eyes that she wants it to be one of those stories of a guy who spent three years hiding inside one of those cannons they use for the circus. And at the end of the war, a Righteous Gentile comes out all joyous and fires him through a hoop and into a tub of water, where he discovers his lost son breathing through a straw.

At the end of the story the Righteous Gentile resurfaces as the couples, now drunk and stoned, play the “Anne Frank Game.” Pick a non-Jew you know and decide, in the event of a second Holocaust, whether that person would hide you or turn you in. While the game amuses the rest of the group, Deb insists that it isn’t really a game at all. “And I’m happy to hear her say that, as that’s what I’ve been trying to get her to admit for years,” the narrator says. “That it’s not a game. That it’s dead serious.”

Englander is fascinated with this shift from irreverence to dead seriousness. Throughout What We Talk About When We Talk About Anne Frank he frequently and forcefully transitions between the comic and melodramatic. He builds the momentum of his narratives and fleshes out his characters with humorous, incisive prose, but the last few pages of his stories always give way to a grim, moralistic end. At the conclusion of the title story, the couples play round after round of the game, afraid “to open the door and let out what we’ve locked inside.” The very stories the narrator mocked Deb for wanting to hear — persecution narratives bursting at the seams with coincidences and heavy-handed symbolism — are precisely the stories Englander seems most inclined to write.

Consider “Peep Show,” in which the married protagonist sneaks into a strip joint one afternoon and enters a world he has never “broached before — the world of dreams cracked open.” The story wants to play against stereotypical Jewish neuroses, but mostly reinforces those stereotypes: the delusional protagonist sees the dancers turning into the rabbis of his youth, then into his wife and his mother, and then, suddenly, it is him up on stage, “an object of desire” undressing for the audience. In “The Reader,” an elderly author — called Author — tours the country promoting his latest novel, a decade in the making, only to find empty bookstores occupied by the same old man, “his reader.” The titular figure’s constant presence frightens Author until, finally realizing how alike they are, Author reads to his reader “through the tears.”

For the most part, Englander’s storytelling blends humor and subtle characterization more successfully than “Peep Show” or “The Reader.” Like in the title story, however, that energy eventually gives way to overt, moralistic conclusions. “How We Avenged the Blums” and “Camp Sundown” both explore the repercussions of revenge, the first enacted by a group of young boys against a bullying anti-Semite, the second by elderly Holocaust survivors against a gentlemen they believe guarded the concentration camp in which they were imprisoned. Each story builds tension by transitioning from humor to profundity, but the greater profundities emerge before Englander tries so hard to reach them.

The kids in “Blums,” for instance, refer to their antagonist only as “the Anti-Semite.” They label him with the exact black-and-white terms with which he allegedly labels them. With a single noun Englander summarizes his characters’ entire ethical dilemma. Likewise, early in “Camp Sundown,” the camp’s head counselor (who divides his time between young guests and elderly attendees who gather to relax and play bridge) dismisses claims from the older guests about the Nazi guard living among them. Hearing this, one of the campers, Arnie, “brings out the big guns. He rolls up a sleeve and flashes the number on his arm.” By coupling a serious gesture (revealing the tattoo) with a comic phrase (“brings out the big guns”), Englander undercuts his own moralizing tendency by comically portraying his character’s moralizing tendency.

Sharp as these moments are, Englander dulls each story’s ending with his signature heavy-handedness. Having beaten up the Anti-Semite, the children in “Blums” feel confused “looking at that crushed boy. And none of us knew when to run.” Meanwhile, the head counselor and his campers, “murderers all” after the old-timers drown the suspected Nazi, watch a marching line of turtles “disappearing into the stillness of the lake.” I admire Englander for trying to wrestle with these questions of certainty, community, and vengeance — we’d be better off with more fiction that shares his ambition and restless searching. But Englander too often concludes his stories from on high, making moral decrees rather than continuing to see these situations through his characters’ eyes. These are capital-A Author moments — the scribe looking down at his creation — from a writer who proves countless times in this collection how well, how compassionately, he can meet his work at eye-level.