From the Mouth of the Whale – Sjon 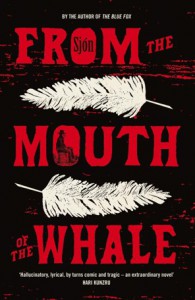 Tr. from Icelandic by Victoria Cribb

From the Mouth of the Whale is the story of a man banished. Jonas Palmason – known as ‘the Learned’ for his vast knowledge of poetry, magic, science, and religion – is expelled from his native Iceland in 1635 and sent to a small coastal island for challenging a new political and spiritual order. Written both from Jonas’s point of view and the author’s, the novel recalls this poet-philosopher’s life as a small child in late-16th century Iceland, his adventurous youth as a genital doctor and exorcist, up through his later years in desolate exile.

The story is fantastic in every sense: mythically, comically, tragically, historically. Jonas is a man of his time: a pre-industrial era where Christian and pre-Christian beliefs blended into a fabric of “savage” science and spirituality. This period, haunted by ghosts, was also haunted by the plagues modern Western medicine and technology have since made obsolete, along with the cures once used to treat them. The flesh found in conch shells, for instance, when burned and quenched in ox urine, was said to prevent husbands from cheating on their wives, as well as to cure seasickness. The business of studying and selling unicorn horns for their healing powers was well established (though, we find out, this was just a clever Icelandic trick played on eager Europeans), and many children – like three of Palmason’s four – died from common diseases.

This is Sjon’s second work in English translation, following The Blue Fox, which came out in 2008. From the Mouth has the same appeal as the first: it (re)vivifies a lost time in a foreign land through a series of breath-taking images. A book floating up like a phoenix over a funeral pyre and exploding; kittens fed on arsenic and bleeding from their mouths; powerful crystals found in the surgically-opened penises of local officials. (There’s also an imaginative, hypothetical telling of Adam’s first orgasm.) All these images, rendered impressively into English from Icelandic by Victoria Cribb, captivate. But this novel, fatter than the first, adds another dimension: political epistemology. Jonas is a self-taught Runic scholar, learned in the old ways as well as the new. His knowledge, therefore, isn’t civilized, and his enigmatic personality isn’t appreciated by the powers-that-be, who consider him a heretic and have him banished. Palmason’s heresy is that, when confronted with the new order of things, he both embraces it and refuses to give up the ‘old’ world.

The story veers structurally from its ancestor: Jonah, the Old Testament prophet who is too afraid to follow God’s commands. Instead of traveling to Nineve to announce its downfall, he attempts to escape his responsibility by fleeing to sea. Sjon’s Jonas is God’s champion, and his novel shapes its narrative antecedent into an experience that is utterly and beautifully different. Although there are some odd stylistic choices that make parts of From the Mouth hard to swallow, the book succeeds in presenting human culture before the invention of standard time and space in all its fabled complexity.