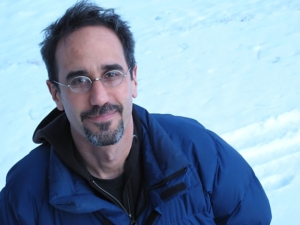 Paul La Farge is the author of Luminous Airplanes, a novel about family secrets and failed apocalypses set in San Francisco, the Nevada desert, upstate New York, and outside of time and space. Luminous Airplanes is available as both a regular book and an immersive text, i.e. this website. La Farge’s other novels include The Artist of the Missing (1999), Haussmann, or the Distinction (2001), and The Facts of Winter (2005). His shorter works have been published in Harper’s, McSweeney’s, Bookforum, The Believer, and Cabinet.

There are two versions of Luminous Airplanes that a person can currently read: one is in print and the other is online. Can you tell us a little bit about how the web-based version is structured?

Sure. The web-based version of Luminous Airplanes, what we’re calling the immersive text, contains some of the text that’s in the print novel, and eventually the whole text of the printed book will be online. But then there are other stories in the immersive text which continue the story of the novel and expand it in different directions. The immersive text is also organized differently from the book: in the book, stories are, of necessity, told in a linear way; one thing is narrated, then another. In the immersive text I don’t have that constraint, and multiple storylines can happen in parallel, inviting the reader to choose between them.

It makes sense to me to call the online version of Luminous Airplanes a hypertext, but instead I see it being called an immersive text. What does that term mean?

Immersive text means the same thing as hypertext. The reason we didn’t end up calling the online version of Luminous Airplanes a hypertext is that the word connotes a genre of online writing which was notable for a while in the 1990s but which has since fallen out of favor — largely on account of the clunkiness of many early efforts, I would argue.

The idea of hypertext has been around for a while. In your understanding, where did it come from, and how did it work before the internet?

The idea of a system of linked sections of multimedia content has been around at least since 1945, when an engineer named Vannevar Bush described a hypothetical machine called the Memex, essentially a super-advanced desk with a microfilm processing machine embedded in it. A computer scientist named Ted Nelson coined the word hypertext in the early ’60s, and he developed a working hypertext system about ten years later. Then in the 1980s there was a popular hypertext-authoring program for the Macintosh, called Hypercard. It let you create little chunks of data — text, images, sounds — and link them to each other in various ways. It wasn’t on the internet, but it was a very powerful program. It even had its own programming language, called Hypertalk if I remember right.

I heard you speak a couple weeks ago about early text-based computer games, particularly games by the software company Infocom, like Zork. What were those all about, and what makes them so interesting and relevant to thinking about interactive fiction?

Zork and its cousins were these beautiful games where you explored a world that was described to you in words, rather than shown to you in pictures. You had to solve puzzles in order to reach parts of the world that were initially off-limits, and then eventually to win the game. You could play them for hours and hours, wandering through the imaginary world, trying to figure out how to open a locked door or get across an unbridged chasm or whatever. For me, they’re relevant because they suggest one way to make a compelling story for the computer, using only words: give the reader a world to explore, and give her/him some puzzles to solve. Actually that’s two ways. I’ve only been able to do anything with one of them.

Also, pedantically, I should point out that interactive fiction refers specifically to this kind of game. People are still making interactive fictions, and some of them are very sophisticated and wonderful, but Luminous Airplanes is not an interactive fiction. My reader is still a reader, and not a player, not a participant in how the story turns out. At least not yet.

You recently told me about this thing called the hypertext cave, where words come at you from all directions and you wear interactive gear that allows you to manipulate them in space. Is that the cutting edge of hypertextuality, or is that old news by now? If it’s the latter, then what do you think has replaced that kind of interactive virtual experience?

I’m not sure the hypertext cave is even really old news; it’s more like a really interesting idea that never really went anywhere. Once you bring explicit 3-D spatiality into a work, text seems to me to fall by the wayside; what’s compelling in that space are images. When I visited the “hypertext cave” (at Brown U.), there was a first-person shooter-type game which involved wandering through a library. There wasn’t anything to shoot, I don’t remember if there was even anything to do, but it was totally absorbing. 3-D games for your PlayStation or Xbox have got to be coming soon, and for me that’s the future of the 3-D interactive space. It’s going to be a lot of fun, some of it may be verbal, but I don’t see it as especially textual.

I just read Luminous Airplanes in print after dabbling in it online, and I was struck by what a great story it is, and how well it stands on its own without the online component. That’s really different from randomly generated words flying at you in a dark cave. What dimension does good writing add to a hypertextual experience?

I guess the writing gives you a reason to keep reading — hopefully there’s some pleasure to be had from the way the immersive text is written. For me, one of the problems of early hypertext is that the writing isn’t great, but there’s also no strong narrative; in the absence of either quality (interesting writing/strong narrative) I feel like I have no reason to spend much time with a work of fiction, no matter what medium it’s in.

You’re still adding to Luminous Airplanes online, right? At what point will it stop evolving?

When my head explodes, which may happen quite soon. There have been warning signs.

Given that Luminous Airplanes online features multiple points of entry and paths of travel through the text, what differentiates it from a choose-your-own-adventure book?

The big difference here is that in a choose-your-own-adventure book, you get to determine the outcome of the story. If you go to page 12, one thing happens; if you go to page 22, something else happens. That’s not the case in Luminous Airplanes. You can choose what to read and how much to read, but the story remains the same. The idea is that the narrator is giving you a kind of guided tour of his head: there are all these thoughts going on at once, these stories which intersect and branch off and dive down cognitive rabbit-holes. You can explore his head, but you can’t change his mind. In that way it’s very much like a traditional novel.

Can hypertext exist in non-digital space, too? If so, how do you see that working?

Actually, it has been done, although the mechanics of it are a little cumbersome. Jacques Roubaud’s The Great Fire of London (Dalkey Archive) is called “a novel with interpolations and bifurcations”: there are long footnote-like passages which you can read or not, they’re outside the body of the text, after the main text; and there are also “bifurcations,” long narratives which explore related subjects or even the same subject in different ways. The novel is beautiful and heartbreaking and requires two or three bookmarks to read properly.

Are you interested in producing more immersive-type texts or will the web version of Luminous Airplanes stand alone in your bibliography?

I don’t know the answer to that one. But just the other day I was talking to a writer named Illya Szilak, who is making a massive hypertext that uses sound and video extensively, and at some point in our conversation, I began to think, gosh, I could try something like that, which is always a bad sign.