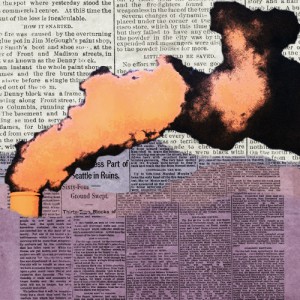 An idiosynratic lexicon, combined with a rhythmically-altered syntax, charms. These vignettes–abstract, whimsical, serious, fast–do that quote up the wazoo unquote. I particularly like the series of words used in the first sentence of the first story, and then where that story ends up, and where the next story begins. And the names in the second story. They quote throw me for a loop unquote. If you like loops and getting thrown for one, then go ahead. Enjoy these.–David Backer

It’s all so vanilla! You actually shout this. Yet out there, somewhere, you tell yourself, are surprising choco peanuts and warm gobs of fudge to gorge on, velvety-rich layer upon dreamy layer, packed with actual cake pieces, like Ben & Jerry’s Red Velvet Cake. Mindblowing stuff. You search and search, chewing your lip, in actual bodily agony now and again. And striking upon it at last – yes! – a triumphant song swelling in your breast, you realize with plunging heart it’s almost too different, too remote. If it’s not your standard vanilla, suddenly it’s Bavarian Raspberry Crunch. It’s Late Night Snack, with fudge-covered potato-chip clusters and salty caramel swirl. It’s totally whack.–Ryan Nelson

“The Peeper” by C. J. Edwards, All Due Respect

As the tired maxim goes, one has to worry about the quiet ones, but in “The Peeper,” CJ Edwards doesn’t follow the classic PSYCHO formula to a swift and bloody end. He lets us stroll along the course of an ever-more-twisted mind until we reach our fatal destination. This means the terror in “The Peeper” builds steady and lingers long. Best of all, this is not a plunge into a hot bath of homicidal mania – just one bad idea leading to another as our pitiable protagonist is lured by loneliness and lust toward an unsuspecting young woman. Creepy without being prurient, intense without having to roar, substantive without getting slow, “The Peeper” achieves what I rarely see outside of early King and Richard Laymon – a hushed little chit-chat with a sad, sorry man, in all his quiet deadliness.–M. C. Funk