East of the West – Miroslav Penkov 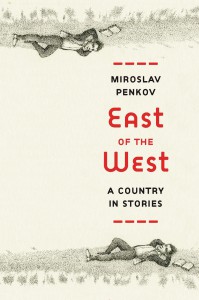 If I were to list here the number of different things that Miroslav Penkov’s East of the West taught me about Bulgaria, you might mistakenly think this debut collection of short stories was an academic historical text. But while it covers the defeat of the Ottomans in the late-19th Century, along with the rise of Communism, the fall of Communism, and the rise of the European Union, these history lessons are wound seamlessly into Penkov’s intensely lovely, and intensely sad stories. The eight pieces in this collection come together like a ball of tiny mirrors, reflecting and illuminating hidden corners of the battered history of a country.

East of the West is subtitled “A country in stories,” and that description is more accurate than seems possible. 28-year-old Penkov immigrated to the United States from Bulgaria in 2001 to attend college at the University of Arkansas, where he went on to complete an MFA, and in these stories, he has immersed himself in the country he left behind. While he draws extensively from his own experience as an immigrant, East of the West incorporates many disparate Bulgarian lives that have been shoved around by the tumultuous tides of empires.

Several stories, such as “Buying Lenin,” “A Picture with Yuki,” and “Devshirmeh,” deal specifically with the immigrant experience. As Penkov writes it, this experience is characterized by a slow-burning pain, taking on many forms, that buries itself at the heart of a life lead far from home and family.  In “Buying Lenin,” a young student at the University of Arkansas maintains a long distance, many-year fight with his Stalinist grandfather over the virtues of Capitalism (or lack-there-of). But eventually the young immigrant begins to wonder if he missed something:

“I tried to picture [my grandfather] my age…handsome face, eyes burning with Communist ideals, lips curved in a smile, a sickle readied for revolutionary harvests, sharp enough to change the world. And what could be said of my eyes and lips?”

“Devshirmeh” and “A Picture with Yuki,” though very different stories, both feature middle-aged protagonists who have left their homes to work dead-end jobs in the United States. The implicit question persists; was it worth it?

In “Devshirmeh,” Mikhail, who a few years after bringing his wife and daughter to America has found himself divorced and penniless, speaks of an angry, preoccupying jealousy:

“I cannot look at people who smile, at young, beautiful couples, at fathers with daughters, and old men with their old wives, healthy together, full of some life that I have been robbed of.”

The only subject that rivals Bulgaria for prominence in East of the West is the United States, and immigration to the United States, a harder and harder feat, in particular. The characters that leave Bulgaria do so by winning a green card in the green card lottery.  Penkov draws out that “lottery” as an emblem of the painful absurdity of the process and its consequences.

But just as East of the West is not about Bulgarian History, it is also not about Bulgarians who live in the United States. Penkov’s cast of characters is wide and varied. But as he slides in and out of skins, there is never a sense that he is doing it for the sake of writerly virtuosity. He writes simply, maybe with the tentative touch of one for whom English is a second language, but his characters are alive, fully occupied by their author, who has poured all the feeling he can muster into this work.

“Devshirmeh,” in which father Mikhail tells a long fairytale about his Great-Grandmother to his daughter, and “The Night Horizon,” deal with two inverse sides of nationalist  domination, the Ottoman practice of taking away young Bulgarian men to serve in their army, and the Communist-era policy of forcing Bulgaria’s Turkish population to take Bulgarian names.

And Penkov’s narrators are not all adult and young-adult males, either. “Makedonjia,” is told from the perspective of an old man, reminiscing of the days when Bulgaria was fighting off the Ottomans, and “The Letter” is told by the thieving teenager Mary, whose mischievous character Penkov writes as competently as any other.

The stories in East of the West are strong alone, and several have been published previously. But together they create something exceptional. Setting out to write a work of literature on the subject of one whole country would be an ill-advised task no matter how talented the writer. But Penkov tackles his subject with vigorous specificity, bringing together a flock of small, often tragic experiences into something that becomes more than a portrayal of a chunk of land arbitrarily confined by lines on a map, and begins to draw out the fraught relationships that exist between people and the things that chunk of land embodies: homes, histories, and nations.

Sometimes funny, and quite often absurd—as any work that deals with the former Soviet Bloc is likely to be—East of the West is also overwhelmingly sad. Penkov takes his characters down roads of tragedy that often end at their lowest point, leaving the reader breathless and heartbroken. And as impressive as his debut is, the end often comes on suddenly, as though Penkov were leaving his characters behind in their time of need.

This leaves the hope that we will be seeing more Miroslav Penkov in the near future, and maybe next time with a novel.