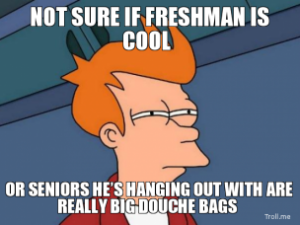 In Europe the rich man and the poor man were thought of as being two different kinds of men; the poor man might be an inferior kind but he was a man: but here the poor man was not, as such, a man, but a person in a state of poverty from which, if he were a real man, he would presently extricate himself. The newly arriving poor…were treated by their predecessors, it seems like freshmen by upperclassmen, i.e, subject to a process of ‘hazing’ so as to toughen their character and stiffen their determination to rise to a position of immunity.–W.H. Auden, Preface to Anzia Yezierska’s Red Ribbon on a White Horse

The reason the US might not change
the fact that 1%  of people own everything
is because our country is like high school
people who don’t have money are
like freshmen who see seniors
who get a lot of privileges
because they worked hard for a little while
waiting and suffering
hoping someday to reach
the promise
for freshmen it’s graduating
and senior skip day and prom, or whatever
and for people without money it’s money
it’s being the 1%
it’s being a king
because ours is a country
where anyone can be a king
–not everyone, that’s statistically impossible–
we have this dream
where anyone who waits and suffers
can make it to senior year.

Why would freshmen give up
the chance to be seniors?