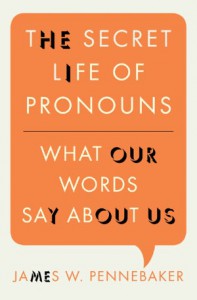 A few nights ago I was at a bar when the topic of Murakami’s new book 1Q84 came up. My friend (who is determinedly reading the 1000 page tome on her iPhone) said that while she’s enjoying it, she doesn’t think Murakami writes women well. Most of his main female characters are cold and cruel, and just don’t seem like real people.

In the ensuing discussion, it came out that the same friend, who recently finished a novel from the POV of a man, thinks that she writes “like a guy.”

This made me wonder—how exactly does one write like a woman vs. a man? Is there any way to measure this, and does it always make the writing more authentic?

The questions—the first two, at least—have indeed been answered. In his new book, The Secret Life of Pronouns: What our Words Say about Us, James W. Pennebaker uses his research in computational linguistics to break down the differences in the ways women and men speak. And in one fascinating chapter, he explores how this relates to writers.

The quick and easy answer is that women use more personal pronouns than men—14.2% vs. 12.7%, which (he tells us) is a huge statistical difference. They also use fewer articles and more social words. Of course this changes in various settings—most formal settings tend to bring out “male” talk, while casual, relaxed settings are more typically “female.”

Pennebaker became interested in how this affects writers, specifically in how they create dialogue. He wondered if talented authors write men and women’s dialogue more accurately. After he and a research assistant analyzed over 110 scripts from more than 70 playwrights, they came to some fascinating conclusions.

• Writers whose women talk like women and men talk like men include Spike Lee (for Do the Right Thing), Thornton Wilder (Our Town) and Joan Tewkesbury (Nashville).

• Writers whose women AND men talk like women include Nora Ephron (Sleepless in Seattle), Callie Khouri (Thelma and Louise) and Woody Allen (Hannah and her Sisters).

Pennebaker makes a point to say that he’s referring to characters speaking like “prototypical” men or women. He also notes that the first category isn’t always the ideal—for example, he thinks the men in Thelma and Louise are “so interesting” because they speak like women, which “reveals a deep interest in other people as opposed to concrete objects.”

I was surprised by Shakespeare, as I’ve always admired him for writing complex female characters. After reading the balcony excerpt that Pennebaker provides, though, I have to admit that despite the intimate, romantic setting, Juliet does muse more about Romeo’s options and the meaning of a name than share her personal thoughts. But perhaps these two ideas are not mutually exclusive. Not all women and men are “prototypical,” so not all characters have to be, either.

Pennebaker concludes that in the end, even if an author does write more like one sex than the other, it might not necessarily matter. “If the content is compelling,” he says, “we will probably not notice it.”