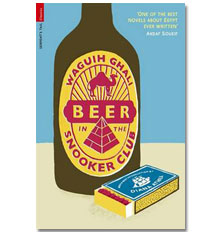 Beer in the Snooker Club begins with a long, boozy afternoon at a famous Cairo establishment, Groppi’s.  It is a typical afternoon for Egyptian Christian Ram, who is broke, but knows the bartender, and is charming enough that his friends will never refuse him a whiskey. Lost between idleness and ideals, his identity painfully split between Egyptian heritage and Western education, Ram passes his days in Groppi’s and his evenings at the Snooker Club, a plush-cushioned hideaway for drinking and gambling at snooker.

Written in English by the Egyptian author Waguih Ghali and published in 1964, Beer in the Snooker Club, takes place at the emergence of the regime—led by Gamal Abdel Nasser and the Free Officers—that eventually produced former President Hosni Mubarak, whose recent ousting by popular uprising may prove to be the defining moment of a generation.

Today, Ram would find Cairo transformed, but still familiar. Cairo’s elite are still bilingual, but speak American English rather than British English and French like Ram’s family. Groppi’s garden is still a dreamy haven from dust and traffic. It would be the perfect place to pass the hot golden hours drinking whiskey, but like most of Ram’s favorite spots, it no longer serves alcohol

Ram, who was a reluctant member of the privileged class in the stratified, colonized country that was Egypt before Nasser’s 1952 Revolution, is just as lost as still-stratified post-revolutionary Egypt begins to take shape.  Ram’s trials and follies are universal to anyone who has ever been young, over-educated, and aimless, but his story is intricately tied to his historical moment.

Snooker Club begins in Egypt, but quickly moves into a reminiscence of Ram’s days in England. After running into his old friend and love Edna, a beautiful, wealthy Jewish-Egyptian, Ram tells how she took him and his best friend, Font, on a trip to London, where they stayed for several years. The story is wrapped up in Ram’s relationship with Edna and Font and their shifting ideologies—about the Suez war, the end of British Imperialism, the plight of Egyptian peasants, and the value of Communism—which come out over long nights in London pubs and at the Snooker Club.

Ram’s narrative voice has the distinct character of a 1950s literary misanthrope, with unmistakable shades of J.D. Salinger or Walker Percy. His wry humor and freely conversational tone feel immediately familiar. He has received an expensive education in English, and longs for life in England. He dreams of seasons and the life of an artist in London, expressing the naïve sentiments that so many young dreamers have shared.

“I wanted to have affairs with countesses and to fall in love with a barmaid and to be a gigolo and to be a political leader and to win at Monte Carlo and to be down-and-out in London and to be an artist and to be elegant and also to be in rags.”

But as much as he idealizes London, the actual result of his education and upbringing is an inability to reconcile himself with his identity.

“I have lost my natural self. I have become a character in a book or in some other feat of the imagination, my own actor in my own theatre… both audience and participant in one—a fictitious character.”

When the narrative returns to Cairo, Edna has been assaulted by an army officer (a foreshadowing of the growing anti-minority wave that would lead to the ethnic cleansing of Egypt’s Jewish, Armenian, and Greek populations), and Font has all but lost his mind, now working in the Snooker Club. Ram’s politics are radical but undefined and he suffers from malaise in Nasser’s Egypt, where communists are being thrown into prison camps and ethnic nationalism is a guiding ideology. But Ram is also burdened by the necessity to choose a life for himself. He knows he should eventually fill his days with something other than recovering from the night before.

Beer in the Snooker Club is so clearly autobiographical that not only do the details of Ram’s life match Ghali’s but the man that Diana Athill, Ghali’s editor, describes in her introduction as “Gazelle-like” is immediately recognizable as the narrator who is so immediately disarming.  Ghali himself committed suicide only a few years after completing the novel, and because it is so easy to conflate Ram with his creator, learning of Ghali’s suicide becomes the novel’s tragic epilogue.

Beer in the Snooker Club is worth reading as a classic story of the pain of being both too idealistic and too cynical to make peace with the realities of living. But it is particularly interesting to come to now, in the midst of renewed political change in Egypt. The policies of Nasser, meant to equalize a deeply unequal society, also put in place a ruling military class and perpetuated a culture that suppressed dissent, eventually ossifying into the regime of Hosni Mubarak that earned the hatred of much of Egypt’s population. All of these tensions are revealed in the book as natural extensions of the plot, always intertwined with Ram’s frustration and helplessness.

The seeds of today’s revolution were planted in that earlier upheaval, but it is surprising to see how little the social structure of the country has changed. The English-speaking Twitter class is today’s version of Ram’s wealthy, bilingual milieu, even if they have become more politically empowered than he was.

The sadness of Ram’s story only comes into focus in the final pages, when it is clear that there will be no moment of revelation, no pivotal point. The novel ends not with an ending, but with the melancholic continuation of everything that came before, after a beautiful and wealthy girl agrees to marry Ram. It is almost a new beginning, even as it is a capitulation to the leisurely life of wealth that Ram, not wealthy himself, exists in so uncomfortably. Ram takes leave of his fiancée and heads to the snooker club for another long evening of talking, drinking, and gambling; his only pleasure and his torment as well. Some things change, and some things stay the same.