Daughters of the Revolution – Carolyn Cooke 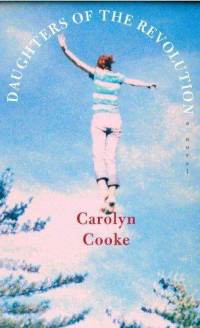 Reading Carolyn Cooke’s Daughters of the Revolution brought back a nostalgic draft of the feeling I associate with discovering literature, when reading was a process of constant blossoming, feeling like my mind was being tended by the deceptively gentle hand of a master of immense talent and wisdom. It’s not a feeling I have very often as an adult reader, and it’s a gift.

In her debut novel, Cooke returns to familiar geographical terrain, building her story among the inevitable psychoses of a setting as oversaturated with its own mythology as the New England prep school. (Cooke won the PEN/Robert Bingham Award in 2002 for short story collection, The Bostons, which took place in Boston and Maine. and has accumulated various other prizes and recognitions for her stories.) Daughters of the Revolution takes place in and around a school for boys called The Goode School in the town of Cape Wilde. The novel begins with the drowning of Heck Hellman, a promising graduate of the school and a former scholarship boy, while out for a dangerous daytrip in a kayak with a privileged fellow graduate. Details of the men’s’ socio-economic differences in circumstance cling to the narrative, told from Heck’s perspective; the drowning is a charged incident, setting the scene for the novel’s multi-faceted exploration of evolving identity politics.

From this point on, Daughters of the Revolution unwinds into a set of loosely intersecting stories about several characters involved with the school over several decades: Heck’s widow Mei Mei and daughter EV; Carole Faust, a black girl admitted to the school through a clerical error (the objection being her gender, not her race, although it’s the intersection that proves explosive); and Goddard “God” Byrd, the school’s doggedly anti-coeducation headmaster. The stories are both unsettlingly intimate and strangely detached. Cooke writes of one character: “He disliked EV in an almost impersonal way that she respected.” I get the same feeling about the way Cooke writes her characters, balancing maternal-authorial omniscience and curious observation. EV and God appear most frequently in the book, their narratives framing the story. God ages repulsively and fades from relevance, both observing and fighting the unraveling of his physiology and his ideology (here the cuteness of his nickname takes on more meaning, drawing a parallel between loss of religious faith and loss of faith in the particular establishment the character God represents). Meanwhile, EV grows up, and the convictions of her generation prevail.

Formally, Daughters of the Revolution is not much of a novel. The initial tragedy is really the climax of the book, and the rest of the narrative feels like the aftershocks. And yet the woven stories that comprise Daughters of the Revolution are resounding and full of meaning, the way we follow the threads reflecting the more organic way we often interpret the stories of “real life.” This is the bounty we reap of a short story writer crossing over into the novel, and failing to shed some of the elements of her accustomed form.

The greatest richness of the novel, for me, lies in Cooke’s revelatory narrative voice. On first impression, some of her figures of speech seemed strenuous: “He’d wanted to be a minister, had flirted with divinity until his mid-twenties. He still believed, somehow, in it. (‘That’s a strange idea,’ his mother said when he confessed it.)” But either the style or my attitude gradually gave way to Cooke’s consistently precise, clever and deeply perceptive style of narration. When Carole arrives at the school, Cooke neatly packs a body of thought on identity politics into a sentence: “Carole, too, might have seemed to the boys at that moment unspecific as she stumbled (or was pushed) over the doorjamb and appeared as a synecdoche, embodying blackness exponentially intensified by gender.”

Aunt Ruth’s magazines were my first real experience of multiple points of view, in which I played the reader, the watcher, the consumer, the pleasure seeker, yet also identified with the object, the woman, a voluptuous form of myself, my gender archetype. I became the watcher and the watched, the subject and the object.

The intimacy of the passage is temporal, as the narrative soon zooms out again, locating and focusing in on another subject. So Cooke creates a portrait of lives and times, an elegant whole from a well-chosen collection of moments.