The (Re)birth of the Author: derek beaulieu’s Experimental Poetics 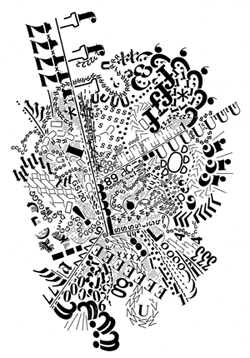 The cover of derek beaulieu’s most recent book, How to Write, superimposes the author’s name on top of two other, much older and perhaps more familiar, names: those of Gertrude Stein and Ezra Pound.  With this superimposition, beaulieu—a Calgary resident and an emerging figure in conceptual writing, visual poetry, and experimental poetics—performs that characteristic modernist sleight of hand, a simultaneous respect for and subversion of aesthetic tradition.  By acknowledging Stein and Pound as spectral co-authors of a sort, beaulieu identifies his artistic lineage, but it is a strange variety of lineage: an assortment of authors whose only common feature is a persistent (and at times downright stubborn) refusal to take the concept of “writing” at face value.  beaulieu’s cover also invokes the reputation for hair-tearing, book-chucking difficulty that literary high modernism and its spawn carry, a reputation that it doesn’t fail to corroborate: his work can seem baffling, inaccessible, and bizarre to the uninitiated.  As with Pound and Stein, however, this difficulty, if regarded with enough patience and clarity, seems somehow important or necessary.  It exists at the outer boundaries of what we are willing to permit to pass as “writing”, and as such gives us a clearer picture of what lies inside those boundaries.  By telling us about who we are not as readers, it also tells us about who we are.  beaulieu’s recent work, which encompasses visual poetry, graphic “translations” of other literary works, and conceptual or process-based prose, hardly presents a unified front.   It is, however, bound together by its persistence in forcing the use of scare quotes around the word “writing”, in imagining alternative ways of creating and reading literature.

beaulieu’s work has certainly always had an unruly relationship with the norms of literary production.  His first major publication, with wax (2003), combined laconic verse that flirts with the meta-poetical with entirely illegible visual poems that spill cataclysmically over the page like the result of a printing mishap.  This dual impulse towards the visual poem and the poem-about-the-poem has always been the primary feature, and perhaps, the primary contradiction, in beaulieu’s work.  After emerging onto the scene, beaulieu produced, as he continues to, at a furious rate, publishing several volumes of visual poetry, a graphic translation of E. A. Abbott’s Flatland and a title called fractal economies that doubles as poetry collection and manifesto, as well as innumerable chapbooks.  All of this work continued to pursue, paradoxically, both conceptual writing and visual poetry: literature reduced to self-reference and process versus literature apparently devoid of reference to anything at all, let alone itself.  This is the contradiction that is central to reading beaulieu’s work: how can literature-about-itself and literature-about-nothing function together as part of a larger poetical project?  Three of beaulieu’ most recent productions—Local Color (2008), Silence (2010), and How to Write (2010)—demonstrate the continued, and robust, tenure of this contradiction.

Local Color is a page-for-page graphic “translation” of Paul Auster’s novella Ghosts.  beaulieu’s take on Auster’s book is a landscape of colored blocks, at times sparse and at times roiling with intricacy, that float across each page in place of text, forming visual rhythms, consonances and dissonances whose derivation from the original text is entirely opaque.  A brief preface seems to hint that each block replaces a noun on the original page, but the process used to produce the “text” (scare quotes, stylistically questionable they may be, are definitely necessary here) is never fully elucidated.  Whatever the process, the outcome is a dreamlike texture of deep blues, reds, and blacks, with a smattering of other colors: think of a Piet Mondrian canvas or Gerhard Richter’s 256 Farben, but with more tolerance for collision and formal instability.

Local Color is certainly gorgeous, but its primary interest, for me at least, lies in the fact that it is printed in a book rather than hung on a gallery wall, and as such we don’t look at it so much as read it.  beaulieu’s work, unfolding across 72 pages, seems to articulate a silent narrative that remains wholly inaccessible to the reader.  Auster’s Ghosts, even if beaulieu has rendered it totally illegible, is still there somewhere, haunting Local Colour like (appropriately enough) a specter.  The preface says more or less as much: “beaulieu’s writing is a record of reading, a trace of absence.  A writing without writing.”  Auster’s novella is an absence in Local Colour, but it is also, in the sense that Derrida uses this word, a trace: a vanished presence or a not-quite-absence.  The original novella seems to be “behind” the illegible, if beautiful, surface of each of the 72 pages, speaking its story in silence.  And beaulieu himself, in performing this “writing without writing”, also performs his own “absence” and silence as an author.

Silence, a compact but intricate little book of visual poems, joins beaulieu’s growing body of visual work in assuming a frenetic, volatile aesthetic that couldn’t be farther from the canon of 60s and 70s concrete poetry.  beaulieu’s visual poems move away from Eugen Gomringer’s terse compositions, bpNichol’s clever graphic conceits, and the de Campos brothers’ heady punning by duplicating, modifying, and fusing basic typographical elements—letters, numbers, and punctuation—to create occasionally serene but more often chaotic and bewildering textures.  Published in an elegant artist’s-book edition by Scotland’s Red Fox Press, Silence has moments of weight and stasis, but more immediately remarkable are its kinetic, seething compositions, many of which seem to explode and spiral across the page from a central originating point.  Printed almost entirely in black ink, the collection reaches the height of its energy when single red bars begin to appear in the poems, which, it is revealed later, in fact compose a part of the letter “P”.  In many of the poems, non-typographical elements—dots, lines, arcs, pointillistic shading—blend with letters until the two are hardly distinguishable; as it turns out, Silence tells us, letters aren’t “abstract” idealities but assemblages of dots and lines, drops of pigment pressed into wood pulp.

The sequence closes with a string of partially-erased capital letters, which initially appears to form a word or phrase but is, in fact, a meaningless jumble of consonants.  This last poem perhaps summarizes (a dicey word choice here) the assault on legibility that beaulieu pursues in Silence.  As in Local Colour, the basic (and I mean basic) elements of the literary text—letters stamped in a certain series on sequentially-ordered pages—are rendered illegible, alien, and impenetrable to any of our accustomed habits of reading.  But one functions by substitution whereas the other functions by decomposition: in Local Colour, the illegible text is a surface placed on top of the original, legible one, whereas in Silence illegibility is achieved by dismembering text at the atomic level.

How to Write, in marked contrast to Local Colour and Silence, is written in prose: no words replaced by graphic designs, no typographical supernovas, just plain-and-simple letters on the page.  This comparative transparency belies the audacity and strangeness of the prose poems in How to Write.  Each piece in the collection is a composed entirely of recycled text: beaulieu borrows from canonical literary works, TV ads, literary websites, and street signs, and permutes and arranges the culled text into relentless prose “compositions.”  Highlights of the collection, for me, include “Nothing Odd Can Last”, a compendium of discussion questions about Sterne’s Tristram Shandy found online which often seem curiously applicable to beaulieu’s work itself; the wonderfully titled “I Can See the Whole Room . . . And There’s Nobody in it!”, a “recontextualization of all the text found in Roy Lichtenstein’s oeuvre”; the title poem, which records every sentence containing the word “write” in 40 works from the modernist literary canon; and my personal favorite, the hypnotic “Wild Rose Country”, composed of “every piece of text within one block” of beaulieu’s home—license plate numbers, car makes and models, bumper stickers, street signs—in which the titular phrase recurs at irregular intervals, establishing a submerged thread of pastoralism within an angular landscape of serial numbers, corporate names, and terse signage.

How to Write reduces the art of writing to a sheer labor of transcription—the creation of literature no longer requires genius, talent, or intelligence, but it sure as heck requires work.  However, unlike Kenneth Goldsmith’s monumental labors of transcription (the purest and most impressive example of which, as well as the book of Goldsmith’s that I am admittedly least likely to actually ever read in its entirety, is the 2003 conceptual tour-de-force Day), beaulieu’s creations seem to retain a certain place for the author, if a very limited one.  beaulieu may not choose the units of content in his poems, but (as far as I can tell) he does retain a certain amount of control over their placement, sequencing, and grouping.  In addition to being kind of postmodern scrivener or copyist, then, beaulieu is also a textual sculptor—his craft in How to Write is not one of spontaneous creation but of selection, permutation, and arrangement.

Local Colour, Silence, and How to Write offer a reasonable summary of the essential materials, as well as the essential problem, in beaulieu’s work.  On one hand, beaulieu’s visual poems and “translations” force us to view text—the basic compositional element of the literary “work”—as it really is: a material, mutable, transformable entity that is childishly easy to divest of “meaning” or “expression.”  On the other hand, beaulieu’s conceptual writing attempts to make some sense of the massive overabundance of text which is integral to our current cultural and historical situation, as well as to the realities of our day-to-day lives.  One set of work divests the printed word of its transparency as a medium of communication, while the other reduces the complexities of linguistic experience into prose, seemingly the most transparent, “invisible” form of writing.  One seeks to render the invisible visible in writing, while the other seeks to force our dynamic experience of spoken, heard, and found language to vanish into the abstraction, silence and invisibility of prose.

If one wants to try to locate a unifying characteristic that resolves this contradiction (and I’m not at all convinced that one has to), it might be helpful to recall the strange triple authorship implied on the cover of How to Write.  The decision, in retrospect, makes sense: beaulieu didn’t actually write any of the text in his book, so why should his name be the only one on the cover?  A name on the cover of a book, after all, means something very specific to us: it refers to a person who has things to say or express and accordingly writes a book to say or express them.  If beaulieu’s work attempts to move away from saying or expressing things, or at least from saying or expressing things that can be ascribed to a particular individual (a task that can be accomplished both by making writing “concrete” and by making it invisible), then the status of that ubiquitous name on the cover needs to be revisited.  beaulieu’s work, it might seem, fully accomplishes the “death of the author” announced by Roland Barthes nearly 50 years ago.  Or maybe it accomplishes something slightly different.  Maybe it models a transition to a new form of authorship, and thus to a new way of thinking about what it means to have something to “say” or “express.”  Maybe it expands rather than nullifying the expressive potential of printed literature.