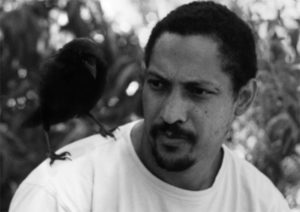 I asked Percival Everett, author of many books, to talk about his new novel Telephone. He neither did nor didn’t.

I should say I’ve already had three or four full-length interviews with “Percival Everett” in my head by now. I’d say they went well. Now I’m lost. Which seems like a good place to start because it’s more or less where Telephone starts, with its narrator Zach Wells, a “geologist-slash-paleobiologist”(-slash-professor) sifting through his data, trying to perceive some meaningful shape. Is writing for you an excavation of existing things, or discovery of work that’s already there?

Writing is an excuse to study.

What did writing Telephone let you study?

Telephone allowed me to study some geology, a little ornithology and some old chess matches.

There are these recurring instances of pure data interspersed throughout the novel that accrue meaning in relation to the narrative: the bird specimens Zach finds in Naught’s Cave, Latin phrases I had to look up, a list of supplies that grows one item at a time. Were these interluding elements somehow meaningful to you before their inclusion in the novel, or did their inclusion create meaning?

Not to be difficult, but I will never say what anything means in my work.  The elements of the novel will do the work they do.

Except in Zach’s dream, we never go to Naught’s Cave, never actually enter it, but it feels like somehow, by the end of the novel, we’ve emerged from it, or that we’re at least on our way. Zach says, “I hated the notion of redemption. But here I was in the world, in this world. I would do something” (194). Do you share either feeling? His disdain or his resolve to act?

Of course. Isn’t that where we are in the world. But the novel is not about me or what I want it to mean.

I love the scene where DeLois pulls up at Zach’s motel with her poetry workshop. It’s hilarious. Zach’s wife, Meg, is a poet, too. You, Percival Everett, have published a number of poetry collections. How has poetry, if at all, influenced your fiction?

I write poetry to offer proof that I cannot write a poem. I try. One day I will write a good poem. Does it influence my fiction? I suppose, but I am not smart enough to know how.

Do you feel the same way about writing fiction? That it proves certain limits?

There are things I want to do with fiction that I have not yet figured out. Perhaps I never will.

That scene where the poets show up is like the inverse of the scene in Vonnegut’s God Bless You Mr. Rosewater where Eliot stumbles drunkenly into a science fiction convention, I imagine in some basement, and essentially professes his love for what they do. They both point to the underdog literary hero and to a particular kind of admirability. Do you have literary heroes?

Zach’s relationship with his twelve-year-old daughter Sarah is at the heart of this novel. You’ve published something like thirty books. How has fatherhood influenced your work?

Good question. It has, because it’s influenced everything I do and think. I am smarter than I was and yet I now know less than I ever did. I have learned both patience and impatience. I have been humbled by my sons. I once entertained the notion that I have a decent imagination.

What have your sons shown you about imagination?

That imagination has no ego, that it doesn’t know who understands it.

What’s your relationship with Paris? Your past two novels both in part take place there.

Lived there for a year. Love the city.

What do you love about it?

Paris is a beautiful city, but what I admire is the love of art and books.

To riff on the root of Rachel’s question to Zach in the bar (though not with the same intentions), do you dream in color? Or in words? Are your dreams important to you as a writer or as a person?

I don’t think so.

In the scene where Hillary’s ghost appears in Zach’s dream, she says things he doesn’t entirely understand but, still, he reasons: “it being my dream, my construction, logically, necessarily, I must have understood her message” (175). If Telephone and your other books are your constructions, are there things about them you don’t understand?

Jed Munson is a graduate of Wesleyan University. He was born in Madison, Wisconsin.