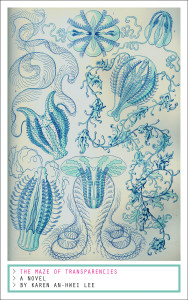 The narrator of The Maze of Transparencies, a novel set in a near future, post-technological collapse, is a data cloud named Penny. She describes herself as “a panoply of people’s data . . . a whisperer of dreams . . . a twinkle of global consciousness.” She follows Yang, the protagonist of the story she’s telling, like a little puffy cloud over his shoulder.

Remnants of a techno-centric world make up the novel’s landscape and the characters within it. Yang is a gardener of plants who used to be a gardener of data. He was a “user” of Penny, meaning he accessed (and presumably added to) her data, but now he “can’t log in.” Penny is present, but Yang can’t reach her. Penny’s narration and Yang’s conversations with others primarily consist of world-building for the benefit of the reader – in Penny’s case, directly addressing readers and filling us in on what happened during the “collapse.”

Penny’s voice, frankly, is the star of the show. As narrator and data cloud, Penny is both a (nebulous) container for and a distributor of information. Because this is a novel, and Penny is telling us a story, “information” (data) means words, and lots of them. A glossarium, as Penny might say. The prose throws jargon, portmanteau, compounds, denotative play, poetry, translation, and biblical and present-day U.S. references into sentences interrupted by em dashes and parentheticals. Words like mezzopolis, cyberfatigue, multiversity, digerati, affluenza, dataphobia, and zeroization abound.

Penny wrangles, with obvious pleasure, the data that make her. As an entity that has access to everything, her communications contain multitudes. For example, she describes herself like this:

Flushed with data, I’m multifariously cirrus, nimbostratus, cumulonimbus, cirrostratus, altostratus, altocumulus, and nacently stratocumulus in my identity authentication, introverted yet not entirely shy, sensing and cerebral more than intuiting, batteries-not-included, animated as feminine yet not animus per se, in the style of a wisdom warrior, azure-dappled … a garden of one million hertz, a sandbox with expandable boundaries, a figment of an enterprise, a fragment of a platform, and none of the above – a cloud.

For Yang, a poet as well as gardener, “a cloud is a cloud, no more.” This phrase echoes throughout the text and takes on as many interpretations as we, Penny, and Yang can throw at it. One could find oneself feeling cloudy, in a fog; something could be unclear. Penny is a cloud in the computing sense, but she’s also like a vapor made visible to us through her own voice. Yang’s poetry, which begins, ends, and sometimes interrupts chapters, drives home this idea: words don’t mean what they used to. The negotiation of denotative meanings of previous and contemporary terms in the novel is called “retronyming”: a naming back, a return. Cloud means not-Penny, since she’s offline.

The tale Penny’s been “scripted” to tell is Yang’s journey to find “a cloudfree formula for happiness.” He wants to understand love and happiness. Of course, by “cloudfree,” he means a formula independent of computing services. He travels by foot, speaks with other humans. He brings them food he’s made, trading snacks for information about an intangible thing. I think we’re meant to wonder: Would Penny have the answer? In her vast stores?

How can there be a “formula” for happiness? What is happiness’s “data”? Near the end, Yang wonders, “aren’t we all bots, to an extent? Aren’t we all fragments of code, in a way?” Yang isn’t a fragment of code, but he is a piece of data in Penny’s bank. The novel plays with these ideas: toggling among digital, virtual, and analog; quantitative and qualitative musings; the forms and languages of facts and feelings. These fluctuations are simultaneously funny and sad, which is Lee’s real achievement here. It’s a whirlwind of linguistic and intellectual savvy, sure. But as the story progresses, it becomes more about Yang’s journey than Penny’s. Penny’s strong voice fades in the final sections, allowing “human” elements to carry us to the end: Yang wonders about love. He pays careful attention to plants, and he offers his new friends, the harbingers of happiness, black sesame cakes.