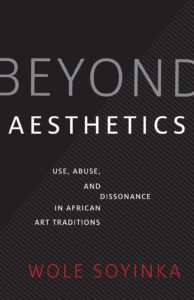 In his 1981 memoir Aké: The Years of Childhood, Wole Soyinka recounts how God entered the local church in the city of Abeokuta for evening service. “The organ took on a dark, smoky sonority,” he writes, “adapting its normal sounds to accompany God’s own sepulchral responses, with its timbre of the egúngún, to those prayers that were offered to him.” It’s a perfectly Soyinkan description, interested as it is in the ethereal interblending of distinct cultural traditions — of the egúngún, a form of ancestor-worshipping masquerade, and the stultifying tradition of Christianized organ music. For as long as he’s been writing, Soyinka’s been drawn to the cross-pollination of Christianity and Orisa, the primary Yoruba religion. In his works, the threads of both form a compound weave that, like a knot woven of water, slips and slides away at the first attempt to untie it.

In general, it would be harder to find a more sensitive and subtle scholar of cultural syncretism than Soyinka, though his newest work is marked by a change in tone. Beyond Aesthetics: Use, Abuse, and Dissonance in African Art Traditions is an impatient, frustrated diatribe in which Soyinka rails against the iconoclastic destruction of traditional African art and the careless treatment of its conventions, his indictments arriving with all the curmudgeonly vitality of a silver-haired paterfamilias. The book’s burly subtitle gives a pretty clear picture of the violence inherent in these misprisions, though, as Soyinka makes apparent, there’s also a hefty dose of absurdity to be found in the careless concoctions that can arise from the muddled heritage of African art.

The book begins with a description of the African Renaissance Monument, located on a seaside promontory in Dakar, Senegal. Erected by Senegal’s then-president Abdoulaye Wade, the structure, “a staggering tonnage of marble and earthwork,” memorializes the point of departure for the countless Africans forced into slavery during the years of the international slave trade. The problem with it, as Soyinka explains, is “that not one single aspect of its sculptural figuration bears the slightest resemblance to anything African.” The full-frontal absurdity of the glaringly neo-fascist monument — which, Soyinka later learns, “was constructed by a North Korean consortium” — along with its hefty physicality together produce an Archimedean point that Soyinka propels himself from, diving into the murkier intricacies of his text.

Beyond Aesthetics is a buffet of sorts, a feast for cynics and the dispossessed. Soyinka, a practiced pugilist, begins by excoriating the practice of translating Yoruba spirituals into English, a process that tended to disregard the dominance of tonality in the Yoruba language. This formal ignorance ended up, as Soyinka explains, producing nonsense songs. Questions of form have long dominated Soyinka’s critical writings, and it’s no coincidence that the immaterial realm of sound is involved here. In his 1976 tract Myth, Literature and the African World, Soyinka describes how the invasion of the European metaphysical tradition led to a loss of chthonic consciousness in whatever traditions it touched, with the consequence that form itself was often relegated to a lower status. This basic anxiety about the etherealizing tendencies of the Christian tradition runs like an undersong through Soyinka’s oeuvre.

It’s no surprise, then, given the primacy of form Soyinka tacitly endorses throughout the text, that Beyond Aesthetics presents as a personal tour of his collection. We’re treated to lengthy discussions of a stone-clay mug from the Korean Silla dynasty, a clay teapot of burnt-chocolate color gifted to him by Chinese colleagues, and a stony caryatid and priapic monkey figure that were stolen from his personal study. Through all of this, Soyinka comes across as a wry, glad-handing docent; his philosophy of collecting isn’t so much systematic and rigorous as personal and expansive. “The collector,” he writes, is a “compulsive mythologist,” a lustful acquirer ever in search of a system. For Soyinka, the draw of an antique art object is necessarily numinous, subjective, and irreducible. The object’s true value, he suggests, lies in the potential it provides for personal mythologization.

If that seems like a relatively reckless stance to take when it comes to the theoretical underpinnings of collecting, rest assured that Soyinka knows. There’s an odd energy propelling Beyond Aesthetics, a generative divide between the text’s ostensibly rigorous framing — which contains the lion’s share of the text’s anger — and the personal method Soyinka pursues, with his interest falling squarely and heftily on the latter. If Soyinka’s critical eye is infuriated, its partner, bent on collecting, is joyously invigorated, serving as a model example of the playful inquisitiveness which, correctly employed, would seem to head off the disastrous misapplication of artistic traditions. One thing Beyond Aesthetics seems bent on making clear is that Soyinka is cool, in that classical, unreflective, toothpick-gnawing way we tend to associate with a young Matt Dillon or any-age Brando. An activist, world-traveler, and perpetual firebrand in Nigerian politics, Soyinka’s led an objectively fascinating life. In the 1960s he took over a Nigerian radio station and demanded the cancellation of a rigged election, and after offending the dictator Sani Abacha in the mid-1990s he was forced to flee the country on a motorcycle.

But even acts of protest mellow with age. Soyinka’s current method for dealing with distasteful political figures is a strange compound of serenity and Ferris Bueller-like buffoonery. One of his antiques, a Japanese samurai sword, has been magnificently repurposed to just this end:

Tucked away in my forested home in Abeokuta, one of my improvised rituals of release into the bliss of Nirvana was to go into the surrounding woods and wade barefoot into the shallow stream where a chopping block — the trunk of a fallen tree — had obligingly positioned itself. Some moments of absolute stillness, a silent, intense summons to Ogun to guide eye and muscle in unerring partnership, and then a slow, two-handed swing around the left shoulder and head, accompanied by a blood-curdling ‘samurai’ yell that rose to a crescendo with the sword’s descent onto a cheroot cigar for a clean decapitation, having first assigned the doomed cheroot the name of some truly poisonous political villain.

Afterward, he smokes the cheroot while drinking a cold beer and dipping his toes in the stream. It’s not super clear what the purpose of this aside is, other than to remind you that you’re not Wole Soyinka and you don’t get to do that sort of thing. If pressed, you could probably come up with something about the repurposing of artistic traditions, about the ecstatic liberty found in untethered objets d’art and the vitality of circulation — and you’d probably be close to right. Though it’s never made too explicit, part of Soyinka’s passion for collecting is, at heart, animistic. When, in Myth, Literature and the African World, he complains that the modern cosmos is bereft of “the essence of the tangible, the immediate, the appeasable,” what he’s really suggesting is that the world seems somehow less alive.

What would seem to make something alive in the Soyinkan worldview is its possession of a past, preferably a thorny one. As a result, the greater share of the page count in Beyond Aesthetics is devoted to case studies in artistic controversy, careful commentaries that impugn the simplicity of objections to artistic innovation. The story of Chris Ofili, “an artist who was born and raised in Britain, but Nigerian-blooded — of Igbo parentage and, conveniently, the product of multiple artistic traditions,” is one of the more lengthy and considered cases. In the 1990s, Ofili’s painting The Holy Virgin Mary was featured in the exhibit Sensation at the Brooklyn Museum, and caused an uproar when it was revealed that the painting’s base material was elephant dung, which Ofili had encountered on a recent grant-funded trip to Africa.

This forgotten controversy — which garnered condemnations from, among other first-rate minds, then-New-York-City-mayor and still-Halloween-decoration-magically-invested-with-speech Rudy Giuliani — interests Soyinka in the sense that the roots of the objection are almost impossible to clearly discern. Instead, Soyinka attempts to justify Ofili’s painting, pointing out that “the traditional material in Isara and similar villages for what you might call a floor finish was eleboto, or cow dung,” which, mixed with special herbs, formed an apotropaic paste that “served to keep evil spirits out of the home.” He adduces as well the fact that in various traditional shrines cow dung was often smeared on sacred drums and statuary: “[T]he point one wishes to stress is that cow dung was not considered an impious presence in the sanctuaries of deities in a number of traditional societies.”

Soyinka’s careful to point out that Ofili was likely unaware of most of these resonances, and his point isn’t that Ofili’s painting is redeemed by any of this knowledge. What Soyinka wants to suggest instead is that the forceful objections arising from a misapprehended objet d’art frustrate and prevent the investigation of potential justifications for the work. If, as Soyinka believes, the “primary objective of art is to constantly reinvent itself, its own modes of expression and representation,” then the act of justifying shocking works of art — the whole faltering parade of pokes and prods, of references and allusions and endless suppositions — becomes an artistic process in its own right, a sort of life-bestowing chaos. Lastly, Soyinka is obviously aware that the whole unjust calculus that forces artists to kowtow to moralizing demands for self-exegesis tends to force itself on art works deriving from non-Western traditions.

Soyinka’s other point in excavating the Ofili controversy is to remind us how multifarious and densely ramified art traditions, Western and otherwise, are. A healthy chunk of the book is concerned with modern day iconoclasm, with the savaging of Yoruba artifacts and shrines wrought by groups like Boko Haram and the comparatively minor Beeldenstorm effected by Christian and Muslim groups in Nigeria after the rise of the country’s own Born Again movement in the 1970s. Soyinka’s culminating rant against iconoclasm and its “pitiable swathes of destruction” derives its full-bloodedness from his recognition that the “creative and intellectual property of the world constitutes an imperishable library,” against which iconoclasm can only seem a fundamentally absurd and self-aggrandizing endeavor. The web of culture is so fine and immense, its imbrications so spider-thin and ultimately untraceable, that something, whether work or influence, will inevitably survive.

Although his observations about the purpose of art are handily generalizable, Beyond Aesthetics is of course primarily interested in African art traditions, which Soyinka once again treats mythically. The figure of the àbikú — a sort of spirit that returns again and again in the form of a perilously mortal child, one who dies young and is reborn, often to the same mother — is, in Soyinka’s vision, “the pertinent metaphor for the history of African dispersal, but most especially of the Yoruba.” African art’s “cultural resilience” and “will to resuscitation” are among its hallmarks, and if, as Soyinka seems to believe, the object of artmaking lies in the lustful inquisitiveness it inspires in its viewers, then we can begin to understand not only his rage and adoration, but also the intense pleasure he seems to take in his diatribe. For all its vituperation, Beyond Aesthetics is a happy book, filled with a rambling sense of life. After reading it, you end up hoping, praying even, that the world would cast up more souls like Soyinka’s — sensitive, probing, alight with earthy fire and a marvelous, tap-dancing curiosity.