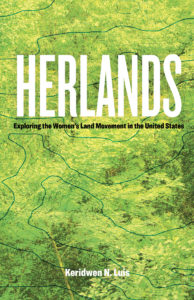 Political efficacy is a concept frequently at issue. We debate whether it is useful to tweet at Donald Trump or go to a protest, whether liking something on Facebook constitutes political activity, whether arguing with your parents after Christmas dinner is effective praxis. This kind of engagement is not the only kind of political activity that’s effectiveness can be debated. Withdrawal, too, is a form of political practice, and the one that Keridwen N. Luis deals with in Herlands: Exploring the Women’s Land Movement in the United States. In this book, Professor Luis conducts an anthropological study of the women’s land movement, examining communities from Massachusetts to New Mexico. Luis places this movement in a historical context of two waves. The first of these stretches through early America, including such forerunners as the Oneida community and the Mormon state in Utah. The second wave, the one which exists in the distant or not-so-distant memory of many of the people Luis talks to throughout the book, is the hippie movement of the 1970s.

But Luis’ focus in the present. She visits the communities (she does not explicitly identify their locations) — Turtle Mesa, Mountain View, Oaktrust — explains their history, and describes their relevance to herself and to others. An anxiety, however, runs through the book. In a time of constant crisis, is a radicalism of isolation still able to create change? More than that, is this form of radicalism, given its attendant ability to exclude, still positive?

Luis does not quite answer these questions. The book is, after all, an ethnography, and is not intended to address authoritatively issues of feminist praxis. Yet, even early on in the book, this is the way that Luis introduces the topic. The first paragraph of the first chapter discusses this idea of relevance:

Relatively few women, even within the larger sphere of “lesbian cultures”, have actual experience of women’s or lesbian lands . . . How do ideas reach from actual women’s and lesbian spaces to a wider queer space, and even into larger feminist and mainstream discourse?

If Luis posits an initial importance and purpose to women’s and lesbian lands, it is to create and disseminate these ideas. She is attentive, not quite obsessively but certainly with a kind of pervasive, worrying concern, to the continuing relevance of the practices that she describes.

From the first two chapters, Luis deals with this question, presenting several potential answers. She cites the “100th monkey principle,” which says that, for every hundred people that are exposed to an idea or piece of culture, one will be qualitatively and radically changed. She discusses the ways that the culture of the collectives has filtered into more “mainstream” (though certainly far outside the cisgendered and male-centric mainstream) lesbian and feminist culture. But these are, respectively, upstream and downstream from the communities’ political project. What the communities do, ultimately, and their immediate significance to those that live there and invest so much into their success, is a different question.

The policeman asked [her], “what do lesbians do?”

She giggled behind her hands and shyly looked up at the circle of women gathered around her.

“I said,” and she beamed knowing she had the right answer, “They go to meetings!”

The lesson of this anecdote is evoked at many points in the book. The members of these communities meet, and talk, and meet, and talk, relentlessly. They do other things, of course — they build houses, for themselves and each other; they grow and eat food; they put on music festivals and create art. But mostly what they do is occupy spaces free (or as free as any space can be, as Luis is careful to point out) from the overt dominance of patriarchal culture, and discuss who they want to be with each other and what they should do about it.

Much of the drama of these anthropological studies is drawn from these arguments. The residents of these collectives debate who owns the land itself, how property should be organized, who should be allowed within the borders of the collectives. One collective, funded by a single wealthy heiress, engages in a long and bitter debate with a break-off group of women of color that want to have their own space within the larger land area. Within this particular debate are embedded arguments over ownership and the nature of radicalism. Can a collective still be politically radical if ownership of the land rests with just one person? Can it be radical if it refuses to support the independence and self-governance of women of color, while embracing them as part of the same movement and geographical collective? Clearly, “they go to meetings” encompasses a greater swath of political work than meets the eye.

These examples do illustrate a central question of the book: is withdrawal politically effective? Are these questions, of how to build genuinely radical communities, of how to implement ideas about egalitarianism and inter-reliance, best litigated separate from mainstream society, occasionally permeated by the biases of people that, in addition to being political allies, live together? There are several subsidiary questions that rest underneath this one. Is this withdrawal borne of empathy or of self-interest? Does it matter, and, if it does, when does it? Withdrawal is, of course, a political strategy with a history. Monks withdraw, churches withdraw. Simeon Stylites, a famous early Christian saint, lived on the top of a pillar in Syria, eating what was brought up to him in a pail and occasionally answering questions that were addressed to him by writing letters, separated from the pilgrims that came to see him by a large wall. There is a withdrawal, of course, from contemporary political and cultural life. There is also a nastier form of withdrawal — the withdrawal from concern over fellow humans. While Simeon Stylites had plenty of time for prayer and concentration, one cannot imagine that this practice sharpened his concern for those humans who lived out of sight of the pillar.

These two attributes of withdrawal are primary concerns of this book. Luis makes the argument that the withdrawal practiced by the communities she describes is a productive one, but this optimism comes with a consistent unease. She describes this unease in later portions of the book, which discuss the economic inequalities that are present in the land collectives as well as the persistent denial of the identity of transgender women by some members of some collectives.  Luis describes the latter, particularly, as being undergirded by a desire to withdraw completely from a patriarchal world, and the setting of the barriers of that world through the identities of transgender women. The impulse of withdrawal can sharpen continuously to a fine point. While this may not always reach the conclusion of perching alone on the top of a stone pillar in the desert, it is a dangerous component of the practice as a whole.

It is perhaps appropriate that Luis does not resolve these conflicting impulses. The relevance of the collectives, in addition to their reach into mainstream and left-of-mainstream culture, is their creation of a space to debate and examine and critique. In some of the most refreshing sections of the book, Luis describes the unique freedom she feels in an exclusively woman space. She is able to interact with others less carefully, and to experience a sense of self-possession and awareness. She describes in one passage the strangeness of unexpectedly hearing a male voice in one of these settings (a repair man) — the women quiet themselves and rush to ensure that they are presentable for the encroaching male presence. In this moment she is able to observe the stark change in the way she is able to act and feel in an environment of withdrawal. This freedom, more than anything, may be the best argument for the collectives.