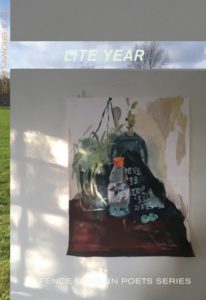 Tess Brown-Lavoie’s Lite Year is not the lyric wandering among grasshoppers of Mary Oliver or the slow growth of some 19th century sonnet. She is a mad farmer whose linearity has been devoured by the growing chaos of our climate and her body. The book-length series of prose poems she offers to readers depicts the accumulating burdens and wonders of living.

The entire work consists of short paragraphs organized into pieces a few pages long with titles ranging from “Beam me up: epic poems are where it is at” to “For a wilderness: it turns out trees live in community” to “Oxbow lake: a cute geological foundation.” The poems are what might be the love child of Baudelaire’s flaneur and Leopold Bloom: they are primarily the perspective of an observant, sardonic woman mired in the technologies, diseases, and looming catastrophes of the 21st century. Brown-Lavoie’s paragraphs stream together in sentences that are at once entirely prescient and verging on incomprehensible. These are poems for readers who like the feeling of their mind unmoored, trusting in the flow of someone else’s thoughts to take them somewhere worth going.

The early poems of the collection have a strong connection to digital communication, sometimes even writing in the format of an email or tweet. They begin the collection’s interest in what is passed down and along. The speaker writes: “Forgive my dank love and the animorph quality of it—forgive me the cruelty I inflict on you and myself — forgive my parents; it was done to them worse. Bioaccumulation; alcoholism; anger.” This entangling of the personal and the environmental, the present and the non-present is what makes Lite Year both fascinating and exhausting. It illustrates a complex web, not a linear narrative nor even a set of disparate, but self-contained images. Instead, ideas flow from one paragraph to the next, but then, just when they begin to resemble the simplified threads of thought we call stories, a mental side step complicates the narrative.

There is a gradual widening of scope over the course of Lite Year. The profound focus of a tweet fades, and we see glimpses of Brown-Lavoie’s speaker out in the world. One particularly compelling poem, “Convention Center,” describes the uncanny experience of attending an industrial agriculture convention as “a chronically ill organic vegetable farmer seated with some other cult’s council of elders at the Italian-themed steakhouse.” In this poem, Brown-Lavoie beautifully commingles the planetary concerns of waste, capitalism, and climate change with the personal horror of feeling entirely out of place and all too female as she must “press close door close door close door close door on the elevator to elude a ranger who set his sight” on her. Although undoubtedly disorienting, this entanglement of personal experiences of ill-health, sexism, and inherited trauma with the planetary concerns of pollution, climate chaos, and inequality is what makes Lite Year work. For, in both the personal and the planetary, we “don’t take illness seriously until it is sharply painful.”

Lite Year asks to be reread. It contains so many curious phrases and transitions that it would be impossible to grasp it all in a single perusal. Yet, it is also standoffish. It doesn’t welcome you in, promising rhymed beauty or a steady beat. As it becomes comfortable, though, it lets show some of its sarcastic humor (“Anybody else like to think of herself as a mountain? —bottom heavy with ice on top”) and vulnerability. One of the last poems, “For a Wilderness,” speaks more directly to the reader, asking if anyone else has read about how trees will feed a fellow stump’s roots. The poem reaches out for connection points, pulling away from the horrifying common experiences depicted by earlier poems such as “Election Year” and “SYD’s” (think orange hair and evil toy destroyer). Lite Year is not for the urban reader seeking their next fresh inhale of Wendell Berry’s exhale. Though deeply embodied and rooted in the land, Lite Year does not offer itself up as willingly as we have grown to expect from poetic farmers. I’m still not sure what will grow from these poems with more time, but the more I linger over Lite Year’s pages, the more I suspect that it is worth the work.

Arts of Living on a Damaged Planet: Ghosts and Monsters of the Anthropocene