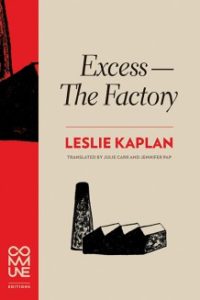 Tr. from the French by Julie Carr & Jennifer Pap

Leslie Kaplan’s Excess—The Factory has nine circles, but you don’t get to the bottom of it. You aren’t guided down to the core of a cosmic order whose regularity is comforting even in its horrors, where one thing connects to the next as surely as sin is followed by punishment. Cause and effect, meaning and referent, are rather disarticulated from one another and laid out like so many elements of a gear box on a work bench. “Things exist together, simultaneously,” the book says. You might think you can put it all together, one piece after the other until you wind up with some coherent whole, but like any normal person who’s tried to put together a gear box, you know something tends to get left out. You’ll likely as not never get it to work properly, but in this case, that’s the point.

Leslie Kaplan is a Marxist and writer, who worked and agitated in factories in the late sixties as part of the établissement movement to bring radical thought and action to the shop floor. Excess—The Factory is in part the product of this period of her life. The work accordingly seeks to “make alienation and suffering palpable,” as its translators say, bringing to bear a language “complicit with the continuing violence of the factory.” As such Excess—The Factory’s nine circles are loci of a paradoxically acentric and asymmetrical circulation, spaces in which linguistic units connect in one moment to decouple and move on down the assembly line in the next. The nine circles of Excess—The Factory do not spiral up or down, but outward in these jagged circumferences, both mirroring and enacting the movement of the capital-C Commodity. That the book is translated into the second person from the ambivalent French “on” – “one,” “you,” or “we,” depending on context – makes “you” (both the linguistic unit and you, dear reader) part and parcel of the process of circulation the book both narrativizes and puts into motion. “You are in the light, stuck. The world turns over, transparent surface. Nothing behind the windowpane. You see yourself being, endlessly.” You have never been more material and more dispersed, more concrete and yet more abounding in metaphysical subtleties and theological niceties.

I would call it a materialist poetics if the “ist” and “ics” didn’t do it so little justice; this is a material poesis in the classical sense of “making” – fabrication – and its words are prefab components. The book makes you into a machinist, not a reader or an audience-member. It doesn’t give you images to envision or ideas to contemplate; it makes you intimately aware of what you’re doing with your hands. When you’re reading Excess—The Factory, you’re in it, you are it:

Inside the factory [page one, circle one, tells us,] you are endlessly doing.

You are inside, in the factory, the universe, the one that breathes for you.

All space is occupied : all has become waste. The skin, the teeth, the gaze.

You move between formless walls. You encounter people, sandwiches, Coke bottles, tools, paper, screws. You move indefinitely, outside of time. No beginning, no end. Things exist together, all at once.

Inside the factory, you are endlessly doing.

You are inside, in the factory, the universe, the one that breathes for you.

Each circle iterates its predecessor and projects the next, so the center is everywhere and the circumference nowhere. The book/gear box/factory is founded on a “blank awakening, inhuman. No bearings, the factory. You are thrown headlong.” Succession is abolished, the door is erased behind you and it all spreads out, “entire.” It presents itself whole and in fragments, and you’re left to figure out how that might work.

You are the assembly line and the scrap yard from the first circle to the ninth. “It’s there, entire, parts and scraps. The factory. There’s no direction, it turns. And rises and falls to the right and to the left, of sheet metal and brick and of stone and the factory.” Deleuze and Guattari said that the world is not a book or a theater but a factory, and that as such meaning is not significative but machinic – it moves, it does, it stops, it flows, its couplings flicker to life or short-circuit depending on the manner of connection and circulation. “There is no image” is a unit that circulates throughout The Factory.

One of the prefab components Excess—The Factory offers you is “excess—the factory.” This is a conjunction, and as such should unite the end of one unit of meaning with the beginning of another. But it is repeated in its stubbornly insistent disassembly throughout the nine circles of the book, like a bolt separated from what parts it would connect and sent clattering down the hall. In that it is, itself, excessive, indicating as it does something beyond and behind itself in a gesture all the more maddening because of the ringing absence of any articulable beyond or behind. No wonder Blanchot and Duras liked the book so much.

I wouldn’t know where to end with Excess—The Factory. For its own part it ends with a woman asking a baby (which might be hers), “Do you think I’m going to kill you?” The book indeed does “make alienation and suffering palpable,” as its translators say. But the “continuing violence of the factory,” as we might glean from Marx, is itself the locus of liberation when wielded (read?) the right way. Leslie Kaplan elsewhere writes of a way of reading that would allow us to “think with a work, with an object both finite and infinite, made by a person or by many, and which, put into circulation,” may bring us finally and radically together. Thus the fragmented whole whose fissures constitute the contours of Excess—The Factory is at the same time a blueprint of a kind of solidarity precluded only under certain social conditions. The factory is also, after all, where things come together and where – according to the proponents of établissement, at least – where the revolution properly begins: in a passage undoubtedly written in the context of the May ’68 protests and factory takeovers, in which Kaplan herself participated, the work tells us that

people invite each other to come see their work spaces. Until then, it was not allowed to go into another work area besides your own. For the first time, workers circulate in their factory, which seems extraordinary: the factory belongs to us. Above all, you have a feeling of time.

Circulation is not just for parts on the assembly line and commodities in the marketplace. People, circulating freely, reappropriate their space, their time. Excess—The Factory attempts to offer a material poesis commensurate with this reappropriation, as well as the violence and alienation from which it must be born.