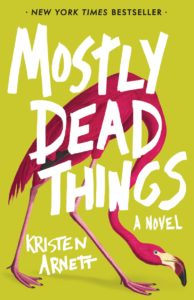 At first blush, Kristen Arnett’s Mostly Dead Things is remarkable for the unexpectedness, the strangeness, the oddity at its heart; after all, it opens with a scene of slicing into the skin of a dead deer with the same kind of care and love reserved for the most delicate of moments. The scene is one of many where the slicing, scraping, shaping, and mounting of dead things are described in painstaking and tender detail; the novel’s pages are teeming with boars, birds, bears, baby raccoons and countless other creatures whose final breaths neither we nor Jessa-Lynn Morton, its protagonist, are privy to. Who would think to write about stuffing animal carcasses? suggest the incredulous tones that tinge many of the blurbs that pepper the novel’s dust jacket and pre-title page pages; Karen Russell calls it “one of the strangest . . . most surprising first novels I’ve ever read” and Nylon describes it as “precisely as strange, riotous, searing, and subversive as you’d want it to be. And, yes, its humor is as dark and glinting as the black plastic eye of a taxidermy ferret . . . ” In the title of Parul Sehgal’s review in The New York Times, the novel is called a story of “taxidermy, love, and grief” with taxidermy operating as the contrasting, unexpected, odd man out in that otherwise classic literary equation. But sitting with the strangeness for a while has made me wonder if it might be that taxidermy and writing are, at their root, the same kind of refashioning work. Among the myriad reasons we turn to novels is because they manage to take the mangled, disparate, unlikely pieces of our lives — the who, how, and why we love, what we’ve lost — and approximate them into something recognizable, whole, nearly real. If you don’t get too close, you can almost convince yourself that when you read a novel, you’re looking at the genuine article. Which makes the art of “piec[ing] together life from the remnants of death,” as Jessa describes her trade, a fitting metaphor and device to deploy in a novel about her struggle to keep her family and the family’s taxidermy business together in the wake of her father’s suicide.

A recent essay by Katy Waldman in The New Yorker gave me the beginnings of a vocabulary with which to understand the ground I had found myself trodding in the wake of reading Mostly Dead Things. Waldman too focuses on the metaphorical potential taxidermy offers artists, even if her understanding of its role in this novel is a bit neater than I eventually landed on. Thinking about writing as the same kind of excavatory, imaginative work that reanimating dead animals demands has been my way into this novel that, despite its sticky, sexy, dangerous seductiveness, proves a bit hard to pin down when you eventually try to. Is this a story about family? About Florida? About queerness? About life and death? About art? About love? About sex and desire? About all the ways those things are close to but never quite the same as each other? I think it may be all of those things which marks the text as sneakily ambitious. I say sneakily because, as anyone who follows Arnett on Twitter will have expected, this writing is brash and funny and unpretentious. These are sentences you want to get a beer with (and quite a few of them are about doing just that) and shoot the shit. This is a book that might fall into that inscrutable category of a romp, though only a few of the literary romps I’ve encountered have aspired to such an impressive project. With such a high degree of difficulty, though, it does subsequently (like the gymnast who chooses the harder trick) sometimes miss the mark a bit. At times the lush prose tends towards purple, the complexities of Jessa-Lynn’s self-destructive tendencies inch towards caricature, and the slippage between past and present storylines occasionally tiptoe away from effectively hazy and dreamy into a confused page-flipping to make sure you know when and where you are.

But those things happen when you swing big, and Mostly Dead Things might be the biggest swing I’ve read this year. And when it nails those elements — which it does, often, to be sure — it is something special.

In its depictions of sex, the novel recasts the Florida’s sweaty, sticky heaviness as an entire atmosphere of urgency, conjuring a needing ache lodged somewhere deep inside the body. In one instance, Jessa and Lucinda, her lover, are holed up in the back of a bar. Lucinda wears a shirt that “clung to her body like a second skin” and Jessa describes the “large patches of sweat” lining the back of her shirt the undersides of arms. When the two leave, it is “dark and unusually still” outside and in this humid space, the two discuss about cicadas while Lucinda squeezes the “meaty joint” of Jessa’s hip. The language of oppressive weight of the night and of animals and insects becomes erotic as Jessa describes the cicada shell she has from childhood; Lucinda leans Jessa into the side of her truck and her hand “crept” and then “crawled” and then “scraped” over parts of Jessa’s body. Jessa describes Lucinda’s breath as “a heavy, live thing” in her ear, while her memories comes from a “static fuzz” at the back of her brain. When she climaxes, her teeth dig into her lip so hard she nearly bleeds — this sex is charged with same dangerous live wire flickering in the background of the novel’s scene of taxidermy. But while in other scenes, the atmosphere of this specific place illuminates the characters’ feelings of being trapped, stifled, or stuck, that atmosphere is transmuted in intimate moments into a visceral physicality that readers can very nearly feel off the page.

The same sort of tangible ache emerges in many of the novel’s flashbacks, as readers see the long messy timeline of the love triangle between Jessa, her brother Milo, and Jessa’s best friend, a magnetic and largely selfish woman named Brynn. Jessa, at eleven, draws hearts between her and Brynn’s names on her sneakers — a spot the two reserve for the names of boys they have crushes on — and then scrubs it out until there’s no evidence of the writing except for a big black mess. A few years later, she can hardly bear to see Brynn and Milo whispering in each other’s ears; the intimacy makes her throat hurt. Jessa and Brynn sneaking kisses and touches at a 16th birthday sleepover. An affair continues through the course of Milo and Brynn’s marriage. Jessa’s queer coming-of-age in flashback is a sucker-punch from start to finish, as Jessa navigates her relationship to her own sexuality, her body, and her role in Brynn’s life. It’s a testament to Arnett’s deeply disarming and honest voice that each of these vignettes feel so true and lived in; a brother-sister love triangle may sound melodramatic, but in Mostly Dead Things, these scenes are heart-crackingly real.

And there it is again: the urge to deem what a novel presents as real. As Waldman points out, taxidermied things can resist being pinned down as either alive or dead, art or nature, a mobility fiction avails itself of as well. This novel is in many ways a highly successful piece of taxidermy; its seams barely show, and only if you know where to look. But I wonder if the project Mostly Dead Things aims for is even more ambitious than an impeccable taxidermy. I haven’t been able to stop thinking about a scene towards the end of the novel; in flashback, Jessa and her father find a dog left for dead on the side of the road. When Jessa reaches forward to touch the animal’s side, her father barks at her not to, that she might hurt the dog. She’s shocked — the animal looks dead — and she asks incredulously, “He’s alive?” Her father’s answer gives the novel its title: “Mostly dead, Jessa. Not all the way gone yet.” Jessa recollects the way the same kind of tenderness that informs her taxidermy appeared on the way home: “I held my fingers cupped in front of that nose, feeling for breath. Little puffs of air against my palm reassured me that he was still with us. My father reached over, across the dog’s still body, and gripped my shoulder with his hand. He held on to me for the rest of the drive down the highway, not letting, not even when we turned onto the state road leading back into town.” We never find out what happened to the dog, but to my mind, the scene is the key to the novel. Yes, fiction is an attempt at reincarnation, much like taxidermy. But the even more tight-wire act it aspires to might be to care for those things that are even more liminal, even less beholden to the categories of dead or alive; what Arnett’s debut aspires to is the act of holding, tightly and gently all at once, to the mostly dead things, and not letting go.

Mary Pappalardo is a writer, editor, and teacher based in Ann Arbor. She has a PhD in English from Louisiana State University, and her writing has appeared in the Los Angeles Review of Books, Real Life, and others. She is an Assistant Fiction Editor at The Offing.