The following is an excerpt from Graffiti, the inaugural anthology from POC United, edited by Tamika Thompson, Pallavi Dhawan, and Devi S. Laskar, published with permission of Aunt Lute Books.

My life has been a tapestry of rich and royal hue,
An everlasting vision of the ever-changing view,
A wondrous woven magic in bits of blue and gold,
A tapestry to feel and see, impossible to hold.
—Carole King 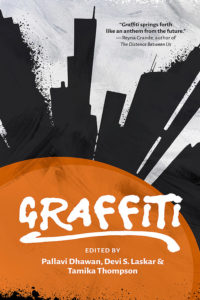 I imagine myself to be a tapestry, attached to a magical loom, holding tension in a warp of threads, running lengthwise, perpetually expanding. I am a collection of strings, constantly woven and entangled in a woof, running crosswise. I am ever-growing, made up of countless fibers, glorious and rich, dyed in many colors, crafting one vibrant story after the next, vivid and complex, a narrative so intricate it would take a lifetime to track every fibrous thread and try to unweave them all.

Exquisitely designed with a multitude of threads. Each one can be felt to the touch. The hours of labor put in by the artist. Every string runs between the fingers of the weaver before it’s meticulously woven into place. Every tapestry has a living physical memory embedded in its fibers.

For this journal, I was asked to write about graffiti. I could not. I was at a loss for words. Graffiti just does not speak to me. Not like tapestries do. Tapestries are grand and abundant. The intricacy of the details. The numerous stories being told. The lushness, the romance, the drama.

Graffiti, unlike tapestries, has no tactile fibers with memories existing in them. Graffiti stays superficial, while tapestries run deep. A tapestry boasts complexity and tells multiple narratives. A graffito is simple and only tells one. A graffito offers no physical connection. A graffito does not distinguish itself from the surface it covers in any tangible way. It always shows up flat and two-dimensional.

Graffiti often feels hurried. Not fully thought through before it is executed. It manifests through powerful sprays of paint, thrown up quickly and covertly. I don’t typically understand the messages being sent. Whatever the messages are, they never seem meant for me.

While graffiti speaks a language I don’t always understand, I can recognize the value it has in modern society. When the messages being passed from the artist to the public are immediate and relevant to the here and now, graffiti can be powerful and inspiring. When used as a rogue vehicle for public communication, for expressing the sociopolitical issues of the day, graffiti can be galvanizing and agitating.

Graffiti stretches back thousands of years to the days of ancient Egypt and the Greeks and the Romans. The hieroglyphics that can still be seen today etched on sandstone walls throughout the Nile River Valley are some of the earliest examples of graffiti known to humankind. The fact that these etchings still exist in their original state makes graffiti one of the oldest visual art forms that is still practiced today.

Egypt is the land of my ancestors, and, for that reason alone, I should feel more connected to the hieroglyphics. If it is a part of my historical DNA, then it should bring out a special reverence within me. Yet, curiously, I don’t feel particularly connected to those ancient etchings that fill my mother’s land. Like modern graffiti, the hieroglyphics appear a little too flat for me, too muted in their details. I simply don’t understand the messages.

I might not speak the language of my ancestors, but I do know how to connect to them through their most dramatic of expressions. With so many theatrical artifacts I can look to, I just don’t have the time for the hieroglyphics. I much prefer to see the Great Pyramids of Giza or the Great Sphinx, none of which are flat or muted. These are the most dramatic relics of the ancient world. Show me a statue of Ramses II standing eleven meters tall and weighing eighty-three tons, and I will shiver and quiver. Show me the painted limestone bust of Nefertiti or a pharaoh’s coffin exquisitely plastered in gold and countless other colors, and I may cry, or squeal, or faint.

I am a theatre artist. Theatre is my one true love. I always live for the drama. Nothing is more exciting to me than live performance. The theatre bug first bit me when I was cast in a musical during my freshman year of high school. Little Shop of Horrors. A musical about a man-eating plant! Ever since then, drama has been the only language I can truly understand. I’ll take in a live theatre performance any day of the week. Give me a satirical comedy on Friday night and a violent tragedy on Saturday. Show me a farce and then show me a melodrama. The more heightened the stakes are, the better. If there’s a break into song and dance, I am absolutely here for it. Show me some “Sturm und Drang” and some “schadenfreude,” and I will shake and stir. I will weep happy tears. I will laugh through the pain. I want to feel all the feelings all the time. I will emote and exhaust myself, leaving my heart bleeding on the theatre floor.

I live in Los Angeles, arguably one of the most dramatic cities in the world. There is a reason why the film and TV industry thrives out here. The Art Deco remains of the 1920s and ’30s provide the perfect backdrop for ghosts of Hollywood past to haunt the city, remembering an opulence that has been gathering dust and is slowly withering away. The geography and climate alone is epic and ripe for heightened storytelling. The unwavering warm and sunny weather; the breathtaking sunsets over the golden coastline; the rugged, dusty mountains bisecting the city; the twisty, curvy canyon roads like Laurel Canyon and Mulholland Drive; the marvelous homes hidden in little pockets off those same canyon roads, coexisting alongside coyotes and mountain lions. There’s this constant threat of destruction. The raging wildfires with clouds of ash raining down on us all; the massive earthquakes that will swallow us all; the apocalyptic traffic jams that trap us all; the dry, parched land that begs for rain; and the blessed rain itself that makes us all freak out when it finally comes.

Every day, a cast of characters transforms this city of angels into a frenzy of kooky pseudo-celebrity personalities. Just the other night, a hot-pink Corvette zipped past me on the road. It was a Sunday night at 10 pm, and, while most people were at home in bed asleep, that speed demon was living their best life. In a town of four million people, I instantly knew that the driver was Angelyne, the busty, blonde billboard queen of the 1980s, a bona fide local celebrity running the streets. Is there anything more dramatic than a blonde bombshell way past her prime but still doing the most? There’s truly no place like home.

I try to remind myself that everybody is different. Not everyone appreciates all that drama. Some people prefer a quieter, simpler kind of life, far from the kooks and angel-headed hipsters that crawl across urban metropolises like LA, and that’s perfectly fine. For them, maybe they respond better to graffiti rather than live performance. To each their own. We are diverse, and that’s what keeps things fresh and exciting. There is something out there for everyone. I may prefer a complex tapestry with countless threads telling one dramatic story after the next, but I can also push myself to appreciate graffiti and its simplicity more. We don’t always have the luxury of time and space for complexity. If all we had time for was a quick glance, then graffiti would be the winner. It’s a cliché, but sometimes less really is more.

I wonder, if I were a graffito and I only had one message to share with the public, what would I say? How can I take my complicated self and simplify it, but still retain my essence? I would ideally be on the exterior wall of a historic theatre in Los Angeles and would obviously say something theatre-related. I would be dramatic and witty, and maybe a little campy and ironic. Perhaps I would be a stencil of William Shakespeare, wearing full drag, face beat to the gods with lashes and a giant wig, with a long cigarette holder dangling from his hands and a chat cloud above him saying something like, “What were you expecting, darling? Shakespeare?”

Ramy El-Etreby is a queer, Muslim, Arab American writer, performer, storyteller, and educator based in Los Angeles, California. His writings have appeared in the Huffington Post, Queerty, KCET, and the ground-breaking anthology Salaam, Love: American Muslim Men on Love, Sex, and Intimacy (Beacon Press, 2014). He is a VONA/Voices fellow and holds an MA in applied theatre from the CUNY School of Professional Studies.