by Clara B. Jones 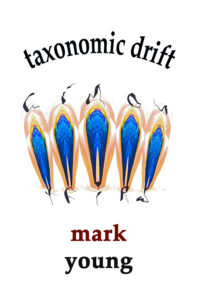 “There exists no Science of word creation.” —Velimir Khlebnikov

No single definition of “experimental poetry” will apply to all innovative or avant garde compositions, unless we use a broad term such as the one provided by the Russian Formalist poet, Viktor Shklovsky — experimental poetry “defamiliarizes” that which is normal, drawing attention to “the use of common  language in such a way as to alter one’s perception of an easily understandable object.” Shklovsky, more succinctly, also, said that the “devices” of experimental poetry make the familiar “strange.” The success of experimental poetry as a sub-genre is evidenced by its range of practices, from surrealist experiments, to hybrid “vispo” texts, to the field of L-A-N-G-U-A-G-E, to concrete and conceptual poetry, to name only a few. In 2012, Joe Bray, Alison Gibbons, and Brian McHale concluded that, “Experiment is one of the engines of literary change and renewal; it is literature’s way of reinventing itself.” Mark Young’s poetry is part of this generative tradition.

Young is the author of numerous poetry collections — chapbooks and full-length volumes, some short books, some very long. In addition to his writing, he is Editor of the journal, Otoliths, a major outlet for innovative poetry and other artistic work. Young, a New Zealander living in Australia, is internationally recognized as a masterful poet of resistance — to injustice and to the oppressive outcomes of imposed authority, including, the mainstream strictures of poetry as it disseminates from academia and society. Those views aside, Young’s oeuvre is large enough and sufficiently rich to warrant treatment by scholars, particularly as the works can be placed within the historical context of poetry influenced profoundly by French Surrealism, French Symbolism, and by the New York School. Like the Symbolists and Surrealists, Young’s poems suggest that he rejects naturalism and realism, instead, projecting the view that, in order to access truth, poetry must “deviate from that which is familiar.” The poet’s new collection, taxonomic drift, showcases his skills, knowledge, and values as an artist.

taxonomic drift is a well-designed volume including 110 poems. This title includes two words having scientific import. “Random drift” is an evolutionary mechanism, in addition to selection, migration/dispersal, and mutation, which may determine the frequency of alleles (“genes”) in a population. “Taxonomy” is a system of classification that, in Biology, is historically associated with Linnaeus. The word, which has a French root, may, also, mean, “phraseology,” and the text under review may be understood as a taxonomy of words, phrases, and sentences drifting from form to form (list and shape poems), locale to locale (Taos, Idaho, Nome), subject to subject (de Chirico, Escher), subject to object (Russian intelligence, GPS), and the like. Although taxonomic drift includes several poems related in some manner to Science or Nature, the title embraces a wider vision of things in the world — physical, biological, psychological, behavioral, primal, and spiritual — evidenced in the poem, “structural remodeling is not permitted” —

To the Japanese it is a sacred
month, when war & fighting
are forbidden. So, too, are sleep
deprivation & psychosocial
stressors. Soon we will be

offering physical abuse as a
luxury, a new way to stimulate
the creative process. The fumble
gene encodes a fly homologue
of pantothenate kinase . . .

Many of the poems in taxonomic drift are short (“fragments”), a common characteristic of Young’s compositions. From a historical perspective, length should not be a criterion of value since many of America’s noteworthy poets have produced short poems (e.g., Emily Dickinson, Kenneth Koch, Lucie Brock-Broido). Young’s expertise with experimental conventions is evident on every page, including in his use of white space, word play (e.g., neologisms and nonsense “words”), humor, erasure, as well as, elimination of caps and punctuation and other experiments with form. In addition to his facility with innovative “devices,” the poems in taxonomic drift satisfy several of the criteria of modern Formalism, in particular, “musicality,” a feature shared with the New York School poet James Schuyler. Music and image are essential elements of Young’s poem, “Today the” — “Today the / postman brought / me a poem / from William Carlos Williams. / Special delivery. / No letter, no / card. The / spoken word. / Stopped his bike / at the top / of the steps & / started to recite / in a voice / equally suited / to delivering / babies or poems.”

Another criterion of Formalism is what the poetry critic Helen Vendler calls, “interpretive power,” and any reader, whether or not knowledgeable about experimental poetry, will think about, and want to return to, this collection. Young’s poem, “Patently absurd,” is a case in point. A long prose poem, it is a tour de force of interconnected references and images, a composition near the end of the book that integrates the volume’s themes, providing relief from shorter, indeterminate pieces, offering a type of closure for the whole collection and support for the author’s few, personal poems: “My intention is that word©s lose all meaning, all touch with reality. I wish to turn them into abstract commodities that are traded on the Futures Exchange or on the Money Market . . . ”

Some of the poems are reflective of old age — without being sentimental (“As I approach my seventy-eighth year, I decide it is time I wrote a really long poem.”; “I am feeling my age, I am feeling / of an age.”) Other signatures include the many textual references to figures who influenced or, who, like Young, himself, were influenced by, Surrealism (e.g., Girogio di Chirico, Isadore Ducasse, M.C. Escher), and it is clear that this movement is central to Young’s artistic identity, as demonstrated by his continuing fidelity to René Magritte (a blog and several books) and to Marcel Duchamp (see, especially, Young’s brilliant 2018 collection of hybrid grid poems, les échiquiers effrontés — a collector’s item). Readers of taxonomic drift will discover, or re-discover, a poet whose mastery of language, of literary conventions, of history, and of Surrealism, broadly defined, place him among the best living avant garde poets writing in English.

Clara B. Jones is a knowledge worker practicing in Silver Spring, MD, USA. Among other writings, she is author of the collection, Poems for Rachel Dolezal (GaussPDF, 2019). Clara, also, conducts research on experimental literature, radical publishing, as well as, art and technology.