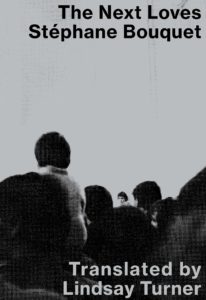 Tr. from the French by Lindsay Turner

The closing line of Stéphane Bouquet’s The Next Loves, is “we’re together enough.” It’s helpful to know these three words going into the book because Bouquet’s is a poetry that shows how readily, if surprisingly, solitude manifests in the language of company. That is to say, The Next Loves is, in the first case, a selection of poems about love and lovers, but it’s especially attuned to the fact that language picks up where the act of love leaves off, and that love poems fill the absences that bracket love with a language of loss and longing. This is how Bouquet can begin one poem with the words, “And then afterwards,” and progress backwards in time, from end to beginning, in a sequence of short poems about a brief love affair. It’s as if to say that since much of love is unspeakable, its preludes and aftermaths are as close as we can get to a lover’s poetic discourse. And so, when he writes, in the course of providing a definition for poetry, “we must steal constantly from absence,” Bouquet claims, echoing Jean Genet, that a primal theft underwrites poetry. What distinguishes Bouquet’s thefts, what absences he turns into language, is how frequently he attempts them in the broad daylight of passionate desire. It’s rare, at least in the American context, to read poems so willing to say, “I love you” and then explore the phrase’s permutations over the course of numerous lines. It’s refreshing, and then, like love, it makes you miserable. Addressing an ideal lover, Bouquet writes, “indeed champion look at me / look at me also / more than likely to lose.”

It’s been written that Bouquet’s poetry echoes New York School poets, some of whom he has translated into French. And indeed, there is a lot of Frank O’Hara and James Schuyler to be found in The Next Loves. There’s O’Hara’s breezy grace and Schuyler’s descriptive unfolding of minute interactions, but I also hear Robert Creeley’s early poetry under and around Bouquet’s lines. (I first came across Bouquet’s work through his translations of Creeley into French.) Compare Bouquet’s desire to “live communally in the sentences” with Creeley’s “My face is my own, I thought, / But you have seen it / turn into a thousand years.” In both, an “I” and “you” are inseparable, so close as to be indistinguishable, and yet painfully apart. Bouquet’s poem ends on these lines, acknowledging that the poem cannot bring about this situation, only articulate it. Creeley, along the same lines, realizes his face is not his own at the same moment he realizes it is undesirable to the other. Poetic language stands at the threshold of revelation about how much contact is possible between two people, how close and how distant love can make us to or from each other. Bouquet also has Creeley’s intensity, a powerful longing for a more comprehensive experience of the world and the people in it, one that drives him at times to ecstasy and at others to despair. Often, the two overlap, as in “Light of the Fig,” the volume’s standout poem, which mourns victims of homophobic attacks even as it celebrates a new love: “If I weren’t so tired I could invent / for us/ an electric lavender for automatic honey, greenhouses / for butterflies, thickets / teeming with caterpillars, a burgeoning anonymous happiness. / But I don’t even know / what time I went to bed last night.”

I wish copyright agreements and publication costs didn’t make facing-page translations so rare, because in this case it could only have shown how difficult the translator’s task is, and how artful her solutions, for poems like these with long lines and an investment in the ordinary — that is, slang and vernacular — language of love. Translator Lindsay Turner’s achievement here is remarkable because it captures Bouquet’s terpsichorean tonal modulation, his movement in the space of a line from rhapsody to disappointment and back. Once again from “Light of the Fig,” a lover reading an article suddenly becomes the metaphor for his departure:

But the truth is that
Nurettin had
“The Aging Population and the Retirement System”
or something
like that and that he’s only going to help me cross
the bridge of hours
and leave me gently on the other side of anguish.

Bouquet’s innovations are formal, too. He remakes the sonnet in the service of a form suitable to the contemporary gay love poem in the sequence “Les Amours.”  Each poem addresses a different object of desire, often one seen in passing: “one more time where a face is a dangerous hopeful landing,” sonnet II declares. Like Baudelaire’s “Á une passante,” in which, suddenly, after a lightning flash, the passerby is gone forever, Bouquet’s sonnets are deliberately incomplete, closing at the moment that a person’s image vanishes or a brief moment of glancing contact ends. One poem unabashedly declares its love for the champion alpine skier Jason Lamy-Chappuis, and claims to top Pindar in his hymn of praise: “Seeing as Pindar’s become so much silence / & indecipherable stuff, someone / has to be consecrated to sing of the skier.” What’s queer about Bouquet is not just that his desire is for men, but that his poems embrace desire’s strangeness, perversity, and multiplicity. Despite the inevitable sadness at work in a book of poems about contemporary love, there’s also what Michael Snediker calls “queer optimism” at work in a book whose title, if “the next” is read as a noun, believes so confidently in what’s to come. The next loves. The speaker says he’ll do just about anything “so that a minty-fresh mouth / forms once more the only divine command / come.” The act of sex doesn’t mean just one thing to Bouquet; instead, it figures constantly in the poems as the only action that bridges past, present, and future. It’s the memory of sexual partners that provides continuity for the speaker’s self-image, and the act of sex that works “like a light” to guide his actions. It’s not fair to call the poems in The Next Loves sex positive, because it’s more complicated than that. They’re sex inhabited.

The Next Loves deserves a wide English readership because Lindsay Turner’s translation introduces a poet whose contribution to a transatlantic American literature is unparalleled. Bouquet’s poetry isn’t so much an import from France as an uncanny conceptual reworking of voices that readers of American poetry have heard before, but not in these registers or with these intonations. Like some of the most memorable poets of the last half-century, Bouquet is devoted to a poetry that earns, by its attention to the everyday, each flight into rhetorical excess. It’s exemplified by a line like, “I forgot to put in my contacts and I lose / . . . that blurry promise.” Richard Wilbur probably isn’t first on the list of poets whose work has had a profound impact on Stéphane Bouquet, but in these poems, too, love calls us to the things of this world.

John Steen is the author of Affect, Psychoanalysis, and American Poetry: This Feeling of Exultation (Bloomsbury). He is a student at the Columbia School of Social Work.