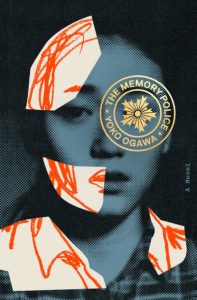 Tr. from the Japanese by Stephen Snyder

The Memory Police is an exercise in minimalism. Celebrated Japanese author Yoko Ogawa, via translator Stephen Snyder, drops us directly into a great dystopia in media res and infuses the environment with preternatural mundaneness bordering on calm. The narrator, a female novelist who is never named, lives on an island where things keep disappearing. (The island itself is shrouded in a metaphorical mist: maps have disappeared, so no one knows the island’s “precise shape, or exactly what lies on the other side of the mountains.”)

The items that go missing start out innocently enough: ribbons, bells, stamps. Hats disappear, and the local economy bends to the new reality: “the milliner who lived across the street began making umbrellas.” The vanishings occur during the night: when the island’s inhabitants awake, they “could sense something strange, almost rough, about the quality of the air. The sign of a disappearance.”

The narrative arc of an object’s disappearance, however, seems not to follow any particular pattern. When birds vanish, the narrator, whose deceased father was an ornithologist, recalls, “I spotted a small brown creature flying high up in the sky. It was plump, with what appeared to be a tuft of white feathers at its breast. I had just begun to wonder whether it was one of the creatures I had seen with my father when I realized that everything I knew about them had disappeared from inside me: my memories of them, my feelings about them, the very meaning of the word ‘bird’ — everything.” And yet despite this, there it still is — “a small brown creature flying high up in the sky” — before fading out of sight.

The disappearance of calendars, meanwhile, requires human intervention: “There were only three or four of them in the house, and they were all advertisements, so I was hardly attached to them . . . I burned them in the little incinerator in the garden.”

These solitary acts of citizen participation are a necessary condition of staying out of trouble — specifically, of avoiding the harsh attention of the novel’s eponymous Memory Police: the authoritarians who patrol the island in their “dark green trucks with canvas covers in back,” searching for noncompliance. “The first duty of the Memory Police was to enforce the disappearances.”

Complicating matters, resistance is not always deliberate: among the island’s residents live an isolated coterie of involuntary deviants whose memories remain unaffected by the disappearances. Living in fear of discovery, theirs is an increasingly untenable existence, as they attempt to blend in with the genuinely forgetful while their own memories sag with the weight of an accumulating inventory from the past.

The novelist’s mother was among them: many years earlier, she had received a summons from the Memory Police, and “her body came back to us a week later, along with her death certificate.” The fate of many others is never confirmed: the Memory Police, going about “their appointed task with terrible efficiency,” roll up to houses and shops, force the residents out at gunpoint, and take them away. Others, sensing impending doom, sneak out to safe houses before it is too late.

The novelist’s editor, a laconic man known only as R, tells her, “I haven’t forgotten anything,” an admission that instigates a series of events that drive the story ever deeper into etherealism. The novelist’s latest work, which R is editing, is excerpted throughout The Memory Police: it opens as a slightly surrealist tale of a typist in love with her tutor but soon enough descends into horror, culminating in the object of her affection trapping her in a locked room — a dizzying escalation mirroring, in its own way, the novelist’s increasing claustrophobia, and that of her editor, as the drumbeat of disappearances, both of items and people, picks up its pace.

The Memory Police is a meditation on memory, of course, but also (as others have noted) on loss and even death. As each successive element of life is surrendered to the Memory Police’s strictly confined void, the meaning of what is left becomes an increasingly urgent question. The novelist’s ongoing book project, centered on the typist who loses her voice and can communicate only via typewriter, intimates the possibility of a death of self: the meaninglessness of existence that naturally follows the implementation of totalitarianism, be it imposed by government or a jealous lover. The circumscription of human free will in whatever form, Ogawa seems to be telling us, is a death all the same.

At times, the novelist’s protagonist appears to be autobiographical; at others, inspired by her fearless editor. The typist is physically confined to a room, just as R is unable to leave his hidden space in the novelist’s house. But it is the typist’s creator, the novelist, with which she shares a collective helplessness in the face of spiraling deprivations, while the real-life R and the fictional typist’s tormentor enjoy the little pleasures — memory for one, freedom of movement for the other — denied their interlocutors. That there should be such ambiguity between perpetrator and victim is, it seems, part of the tragedy of totalitarianism: one can fully escape neither victimhood nor complicity.

It is perhaps inevitable that the relentless march of disappearances arrives eventually for the island’s inhabitants themselves: first their left legs disappear, attached but lifeless, and then their right arms. Soon all that remains are their disembodied voices, a morbid inversion of the novelist’s invented character, whose voice takes leave of her first. For R, who begs her, “Do you really have to go?” the answer is painfully evident: the disappearance of memory spares no one, least of all those burdened with commemorating it.

Jay Pinho is a freelance writer based in London